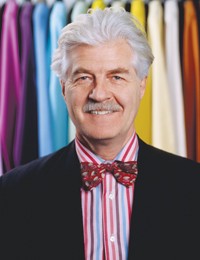 NEW YORK — For a company that began in 1977 selling acrylic sweaters to a mass consumer base, Hampshire Group Ltd. has come a long way.

On the cusp of its 30th year in business, Hampshire now has sales of more than $350 million, and earlier this month inked a deal to acquire the Marisa Christina brand for $4.8 million. Like Hampshire, Marisa Christina is publicly traded on the Nasdaq, so at the close of the deal May 19, Marisa Christina shareholders received 65 cents per share, less a pro rata portion representing transaction costs.

Founded in 1971 and known for its knitwear, Marisa Christina, an $18 million company, has evolved into a lifestyle apparel collection that is sold in more than 700 specialty stores and upscale department stores.

The acquisition is the latest step in Hampshire’s plan for growth in the women’s better market. It also has big plans for its David Brooks brand, which it acquired from Kellwood Co. last October. In addition, Hampshire’s Designers Originals division, which produces women’s and men’s knitwear under a variety of company-owned and licensed names, will launch three new brands beginning this fall.

“We are really working to expand our presence in the women’s better market,” said Ludwig Kutner, chairman and chief executive officer of the Hampshire Group. “We already have a strong presence in moderate with our Designers Originals division, but it comes to a point when you have to change and reinvent in order to keep going. We have the older generation down; now, we need to bring in the younger generation.”

“Up until now, we’ve had no exposure in the junior market, so this new brand is opening a whole new source of revenue for us,” said Michael Culang, ceo of Hampshire’s Designers Originals sector. “It will also work well with our misses’ group since we can translate the trends from junior into misses.”

Another new brand is Mercer Street Studio, a moderate sweater line made exclusively for Macy’s, launching in stores in July. Designers Originals created the brand for all Macy’s stores.

Then there’s Spring + Mercer, a women’s and men’s contemporary line of knitwear with a misses’ fit.

“We own a lot of territory in moderate sweaters, and we know that labels are very important to the retailer and to the consumer,” Culang said, “so we decided that for us to serve a new group of consumers, we were going to launch this new label, Spring + Mercer.”

The company hired Sanjiv Thakkar from ABS by Allen Schwartz to be the design director of Spring + Mercer. To create the line, which wholesales from $18 to $27.50, Thakkar used mainly a viscose-nylon blend, for a softer hand.

Some styles are a fitted cardigan with ruffle accents, a cowl-neck tunic style and a tapered-sleeve dolman style sweater. The line comes in an array of colors from cream, white and black to orange and royal purple.

“This line is fashion-forward and fitted to the body, more so than our other brands,” Thakkar explained.

The company has been testing the line in stores this spring, but looks forward to a major launch in the fall. Spring + Mercer is being targeted to better department stores.

“This line has great, modern styling for this modern woman,” Culang explained. “The men’s line follows that same sort of trendy mind-set which is rare in the men’s sweater market. This line fills a big niche, and we are really getting behind this new brand in a big way.”

Culang said he expects Spring + Mercer to reach between $50 million and $60 million wholesale volume by the end of its first year at retail.

With David Brooks, which used to have a large business with Lord & Taylor when the label was owned by Kellwood, Hampshire has decided to pull out of the department store channel to focus on a specialty store customer.

“We serve a large number of specialty stores, over 1,000, so we thought it was important to focus and concentrate on their needs,” said Elizabeth Giebel, vice president of sales for David Brooks, who stayed with the brand through the acquisition. “When we were making the transition to Hampshire from Kellwood, we went through a period of about six weeks without any product. That was also a shaky time for Lord & Taylor, because of the Federated-May merger. So when we were back on our feet, we just decided it was best to concentrate on our specialty accounts.”

“The acquisition of Marisa Christina by Hampshire gives the [women’s apparel firm] a good strategic partner that can align the business with the David Brooks operation that Hampshire already owns, which will also provide savings in costs that will allow the Marisa Christina business to be more profitable,” said Kestenbaum.

As for the future of the company, Kutner was clear that growth would continue. He said he is not ruling out more acquisitions and more in-house start-ups.

“I am positive that within the next few years, we have plenty of room to grow,” Kutner said. “The will and ability for growth is there, and there is a lot to do that we haven’t already done.”