Handicapping the Stars: Which Young Designer Will Prosper in Future?

Behnaz Sarafpour, Proenza Schouler and Richard Chai could be the next big designers if they don't succumb to the industry's pitfalls. 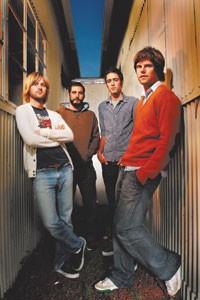 What do these designers have in common? They’re among those who retailers predict could be the future big names in New York fashion. That is, if they don’t succumb to the pitfalls that have befallen so many of their predecessors: lack of financing, difficulty lining up quality production and getting floor space at retail.

But stores agree there hasn’t been such a surge in new talent here in years. Of the 180 designers who showed in and around 7th on Sixth last month, 16 were first-timers and most of them were young. That’s a far cry from the event’s early years in the mid-Nineties, when 60 was the overall tally and all were proven, to some degree.

“I think American design is on fire right now,” said Howard Socol, chairman and chief executive officer of Barneys New York. “I am so excited that there is so much energy in American fashion, and to think about Behnaz Sarafpour, Proenza Schouler, Zac Posen and Trovata. That started when Barneys found Mr. Armani. It’s nice to see this is happening again.”

Not so long ago, fashion insiders were fretting about who would succeed Ralph Lauren, Calvin Klein, Donna Karan, Bill Blass, Carolina Herrera and Oscar de la Renta. But now there is a whole cast of young designers boosting the energy level of American fashion, Socol said. Most of the young guns still have to build significant businesses; the majority of them have sales of less than $10 million a year, according to industry estimates.

Posen has managed to step things up to the next stage, according to Jim Gold, president and ceo of Bergdorf Goodman. “I have complete confidence that he will be with us for many years. He is the best example of a young designer who has gotten through those incredibly challenging early years. His clothing has substance and staying power.” Felicity Huffman wore a Posen gown to the Academy Awards earlier this month.

“Another perfect example is Rodarte. There you have two sisters starting out after college and they just put together the most exquisite clothes down the runway — intricate, delicate dresses with such a couturier’s hand,” Gold said.

This story first appeared in the March 14, 2006 issue of WWD. Subscribe Today.

“Some very young people have remarkable talent. The challenge is to get aligned with people who will help them to manage their business, and handle production, marketing and all those other things. When you get very young and talented designers and link them up with the right counterpart, they can achieve success early on.”

Gold said most young designers are self-motivated. “Who’s pushing them? They’re pursuing a dream, so they’re pushing themselves.”

Bloomingdale’s chairman and ceo, Michael Gould, wonders from time to time “how people so new get so much publicity.”

But with or without publicity, the reality is that there aren’t many collections that sell well “right out of the box,” and once that happens, “people are soured” on the label, he said. Mentoring is key to a designer’s success, Gould said. “What better mentor was there than Kal Ruttenstein?” he asked, referring to the store’s late senior vice president of fashion direction.

But Gould is reluctant to say one route is better than another. “Too much, too soon is a lot of responsibility. But it happens in a lot of fields. A pitcher in baseball can get called up from the AA league and his first game can be in Yankee Stadium,” he said. “I don’t think there are any simple answers. I marvel at someone who can concentrate on their own and has an entrepreneurial spirit to be an independent designer. But there are also people who mentored with Ralph Lauren, Calvin Klein and Donna Karan who went on to have successful businesses.”

Today’s crop of young designers understands — more than any of its predecessors — that publicity is a necessity, and editorial coverage eases the need for advertising, an expense many cannot afford. Whether the media selects reader-friendly designers or vice versa is up for debate. But, either way, the life of an aspiring designer is alluring, as evidenced by the success of “Project Runway” and designer profiles in a variety of magazines, including nonfashion ones. Regardless of their tax brackets, consumers have gotten hip to a host of up-and-comers, thanks to weekly tabloids that mercilessly rate and analyze celebrities’ outfits and favorite designers.

But editorial coverage isn’t always a sure sign of a healthy business, according to Barneys fashion director Julie Gilhart. “Isaac Mizrahi had so much fame and so much talent, and then we opened up the paper one day to learn he doesn’t have a business anymore,” she said. “And in my most amazing dreams, I never would have thought that Helmut Lang would leave Helmut Lang.”

Too often, young designers are too eager to stage runway shows. There are “totally” too many of them having shows, Gilhart said. “There’s a rush for people to go too fast. That’s just a reflection of the fashion business. Fashion is all about speeding up, but so is everything else [in society].

“The visionary designer is the one who has restraint and knows when they can do something and when they can’t,” she added.

There’s also something to be said for giving shoppers the chance to discover labels on their own, Gilhart said. Thakoon and Richard Chai are two names that Barneys customers have taken to without the media blitz that some other designers have enjoyed. She also noted that, as a retailer, one has to wonder about any hype: “How much of it is really real and how much is manufactured?”

Gilhart isn’t opposed to publicity, as long as basking in the limelight doesn’t distract designers too much from their work. “They need to concentrate on making great clothes. The whole press and media is overwhelming for young designers. Honestly, they shouldn’t have to spend so much time out there promoting themselves. They need to be very selective in what they’re doing and how they’re promoting themselves. Sometimes the hype is greater than the collection is in content.”

Too often there is the tendency to push them in front of the cameras when they should be back working on their collections, she said.

Robert Burke, founder of Robert Burke Consultants, said media coverage can be a double-edged sword, but the interest has helped cultivate a new troupe. “The result is, there are more young designers in New York than ever before,” he said. “For so many years, there weren’t many young designers on the scene.”

But the fashion media’s willingness to spotlight rising stars is rudimentary, according to Ed Bucciarelli, president and ceo of Henri Bendel.

“In an industry that thrives on constant newness, it’s not at all surprising that each season the fashion media eagerly embraces a handful of new names touted as ‘The Next Big Thing.’ I think we all wish we could discover that kind of talent every six months….And, naturally, very young designers often become media darlings based as much on our fascination with their youth as on the substance of their soon-to-be-seen collections. Once they hit the runway, sometimes their talent is undeniable, and sometimes it’s not so clear. Often, it’s truly too soon to tell. Regardless of talent, without a few seasons under their belt to hone their craft, young designers may find themselves at a disadvantage once the initial buzz dies down and the media moves on.”

Bucciarelli prefers to think of emerging designers Phillip Lim, Nathan Jenden and Richard Chai as “youthful.” Having spent years developing their talents working for established brands such as Development, Diane von Furstenberg and Tse, respectively, they have produced signature collections that are worth watching, he said.

Lining up the right retail partner “to provide ongoing assistance and encouragement is necessary to help evolve a fledgling collection into a viable business,” Bucciarelli said. “Henri Bendel has always supported emerging talent in our ongoing search for the new and the next. Young designers and debut collections bring tremendous energy to our store,” he said.

In fact, there’s so much interest in young talent these days that a new format might be needed to show the collections, said Stan Herman, president of the Council of Fashion Designers of America. He suggested staging still life presentations in shared gallery spaces, since buyers just won’t have the time to cover all the shows.

“So many who are now showing believe they have to sell a full collection — suits to gowns. Who is going to buy all those evening clothes?” Herman asked. “It used to be, once you had the talent, you moved into other areas. I remember when Ralph started, the parts and pieces were layered on slowly. Some of these young designers have limited fabrics and techniques. Sometimes it makes their collections lugubrious instead of jaunty.”

Herman also voiced other concerns. “A lot of the problem with young designers is, they design the clothes, but they can’t produce them,” he said.

The CFDA/Vogue Fashion Fund offers the type of mentoring that can help a talented designer move on, he added. Trovata’s design team of John Whitledge, Sam Shipley, Josia Lamberto-Egan and Jeff Halmos edged out Derek Lam and Thom Browne for the second $200,000 prize, which was awarded last year.

Whether or not designers who have started their own businesses in the past three to five years will be around for the long haul is a constant topic of conversation with CFDA members, Herman said. He thinks Proenza Schouler, Derek Lam, Richard Chai and Cloak are contenders. Referring to young designers in general, he said: “The stores have to be conscious of building a business, just like they did years ago. They have to understand there needs to be space for them. They don’t have to give them a lot of doors, but have to give them exposure.”

Too few stores with too much buying power is further complicating the equation, he said. On top of that, individual buyers have more ground to cover. “The same buyer from Saks looks at Oscar de la Renta and Derek Lam. They have so much open-to-buy,” he said. “Unfortunately, too many people who are showing are not getting the people there they need. It’s the old game of, if one person makes it through, everyone else wants to try to wiggle through the hole.