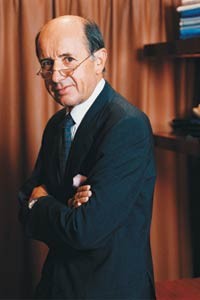 PARIS — Jean-Louis Dumas — who for almost three decades personified Hermès and led the family-controlled firm to the pinnacle of the luxury sector — is stepping down.

On Thursday, after the markets closed here, Hermès International said Dumas, 67, would relinquish his functions of artistic director and chief executive officer, effective in January.

Hermès cited only “personal reasons” for the decision, but Dumas’ increasingly frail appearance and reduced public profile suggest his health has been declining.

Patrick Thomas, 58, an Hermès veteran who rejoined the firm in 2003 and was named co-ceo last year, will take sole control of the management helm.

“[Dumas] was a giant. When I was told I would succeed the giant, I felt very small,” Thomas told WWD. “He has a fantastic, creative mind…and he is known as an outstanding businessman. He’s a poet and a grocer at the same time.”

While the announcement seemed sudden, Thomas said preparations for Dumas’ retirement were quietly set in motion several years ago and health reasons did not precipitate Thursday’s bombshell.

“There is nothing new in his health which would justify this change,” Thomas said. “He is still active in the company, although less so than before. He’s gradually reducing his involvement.”

Dumas — who effortlessly imbued disparate product categories with the soigné but lighthearted Hermès spirit — will be succeeded as artistic director by his son, Pierre-Alexis Dumas, and his niece, Pascale Mussard, 48, as joint artistic director.

The younger Dumas, 39, was named deputy artistic director in 2002 after leading Hermès subsidiaries in Great Britain and, before that, Hong Kong.

Mussard, a 25-year veteran of the company, rose through the ranks of press attaché to direct advertising and communications departments and then window display. As part of behind-the-scenes efforts to prepare for Dumas’ eventual departure, she was also named an artistic deputy in 2002.

Dumas senior was not available for further comment. Yet in a statement reminiscent of his quirky yet heartfelt Hermès initiatives like the “Year of the Hand” and the company’s heavy sponsorship of the arts, he said, “It is with the utmost confidence, and with the unanimous approval of the board that I will hand over the reins of our family house to Patrick [Thomas] and to the executive committee which works with him. From the roots of Hermès, they will know how to draw the sap for the new branches that will grow in response to the dreams of our client.”

The market is bound to look upon the changing of the guard as a watershed moment for a company that is widely viewed as one of the most attractive targets for acquisitive luxury conglomerates.

“Inevitably, the news should revive speculative interest for the stock,” HSBC analyst Antoine Belge wrote in a research note. However, he went on to say, “We believe the transition should go smoothly” and that Dumas’ departure “does not imply that there will be a change in control.”

Earlier this month, speculation mounted in Europe that Belgian financier Albert Frère was about to take a minority stake in Hermès, which both parties dismissed as unfounded.

And on Thursday, Hermès decided to stop the rumor mill in its tracks.

“The family has asked me to say that they plan to hold on to their shares more than ever,” Thomas said firmly. “They have no plans whatsoever to sells shares of the company. The family is more united than ever.”

Members of the Hermès family control 74 percent of shares, and the company’s statutes prevent any unfriendly advances. Any change in management cannot be affected without gaining the support of at least 66 percent of shares.

Sixteen members of the fifth-generation of the Hermès-Dumas families are shareholders, Thomas said. There are an additional 40 family members in the sixth generation, but not all are shareholders.

Thomas stressed Thursday the philosophy and strategy of Hermès would not change once Dumas exits and that “all the skills remain in the company.”

A charismatic and colorful executive with a gentle manner, Dumas helped propel the company to 2004 sales of 1.33 billion euros, or $1.64 billion, on a foundation of solid self-financing and a belief that true luxury runs deep.

That his office on the Faubourg Saint-Honoré is mere steps from where workers piece together custom-order Birkin bags and saddles speaks volumes about his passion for creativity and quality.

“You look with your eyes at an Hermès product, but you can also feel a product in other ways,” he said in a rare interview in 2002. “It can also be about the sound of a clasp that a handbag makes, the smell of the leather.”

Born on Feb. 2, 1938, Dumas is a fifth-generation descendant of harness maker Thierry Hermès, who founded a company in 1837 that would go on to add saddles, leather goods, ready-to-wear, silk scarves and all manner of fashion accessories.

After graduating from Paris’ prestigious Political Science Institute, Jean-Louis Dumas started as an assistant buyer for Bloomingdale’s in New York in 1963. A year later, he joined Hermès, ultimately becoming general manager in 1971. He stepped into the role as chairman after the death of his father, Robert Dumas, in 1978.

Hermès took a 35 percent stake in Gaultier in 1999 and a 31.5 percent stake in German camera firm Leica in 2000 based on Dumas’ belief that Hermès can learn from others. “Professionally, if people consider themselves on the summit, they can only go down,” he once said.

The first-half results disclosed Thursday confirm Hermès is adding its horsepower to a turbocharged luxury sector.

Fueled by a pickup in Europe in the second quarter and “robust” sales in its American stores, Hermès said operating profits grew 12.8 percent to 171.2 million euros, or $220.2 million, for the six months ended June 30. What’s more, a marked improvement in Japan during July and August underlines an upbeat stance for the balance of 2005.

“We are confident because the trend is good in all parts of the world,” said Mireille Maury, executive vice president of finance and administration. She declined to quantify the increase for the summer months, but in the first half, the uptick in Japan was a slim 1.7 percent.

By product category, she noted a 9 percent increase in rtw collections. Last year, production snafus with Gaultier’s first collection had weighed on sales.

In the first half, Hermès allocated part of 58 million euros, or $74.6 million, in capital expenditures to increase leather goods production capacity. The money also went to acquire the building that houses its boutique on Avenue George V here and to expand the retail network.

Of eight new Hermès locations this year, six are slated to open in the second half, including a second outlet in Beijing and its first in Athens, Maury said. Thanks partly to the retail expansion, Hermès said it expects sales growth to accelerate in the run-up to the holiday selling season.

Looking ahead to 2006, key openings include an Hermès House in Seoul and an expansion of Dumas’ prized Tokyo flagship.