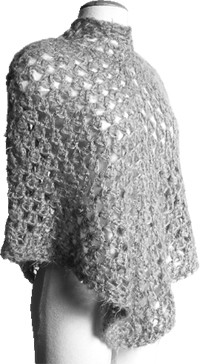 NEW YORK — As mass production continues to dominate the apparel industry, several companies have bucked the trend by offering handmade merchandise. Here’s a look at four firms specializing in the custom-made tradition in product areas such as apparel, accessories and carpets.

In a region named Riebeek Kasteel outside of Cape Town, South Africa, fashion design is giving impoverished women an opportunity to make a living.

Lizel Olckers, a native South African, decided to turn her love of handmade clothing into a business and launched the Ancient Spirit line of crocheted apparel on Women’s Day in 1998. The line is entirely handmade by women, who, in the past, would have been forced to work in the fields or as housekeepers for low wages.

“After apartheid was lifted, I said, ‘Hang on, everything we do we need to reexamine,’” said Olckers, who is in her late 30s. “I suddenly felt that in my early 20s because nothing was the way we thought it was. For me, to do something that doesn’t have a social upliftment component to it seems to be a waste of time.”

Since the women are now able to work at their own pace and dictate their schedules, many feel an improved sense of self-worth, according to Olckers, who noted that she now employs about 60 women, compared with the five with which she started — all of whom still work for her.

In addition, several women who were unable to write their names or read their weekly order sheets have banded together to take courses in reading and writing and are now able to read their orders and sign off on them.

The collection includes accessories such as mohair ponchos and linen and acrylic shawls, as well as tube dresses and dusters. Colors range from solid pastels to stripes of bright rainbow shades. Overall, the line wholesales for about $43 to $130.

Now that the production side of the business is set up, Olckers is focusing on growing the project by expanding distribution throughout North America and Europe. About a year ago, Olckers’ friend, Larainne Kaplan, moved to Vancouver and set up a North American office for Ancient Spirit. Now, in addition to Kaplan’s work out of Vancouver, the line is being wholesaled through the Leila Ross Sales showroom at the Newmart in Los Angeles and The Downtown Showroom in New York.

The line is distributed to about 30 specialty stores in the U.S. and Canada, and is also available in Europe and Japan. The main challenge, Olckers said, is to be the bridge between the needs of women living in rural South Africa and the demands of a U.S. retailer.

“I understand the store in New York needs their summer line at a certain date, but I also understand that the daughter of the woman in the field that’s making the stuff got sick, or it rained for two weeks and it was difficult to leave the village because there was no transportation.”

But it’s clear Olckers is up to the challenge and she speaks about Ancient Spirit’s long-term goals. Olckers said she prides herself on never having turned down a woman looking for work and hopes the concept of employing women on their own terms could be rolled out to other indigenous crafts in South Africa, such as pottery, beadwork, masks and home accessories.

Designer Zonda Nellis, who started her namesake label 20 years ago, knows a thing or two about fabric.

Not only does she work closely with European mills to develop her own fabrics, but Nellis continually offers handwoven tweed day suits made by looms in her Vancouver studio.

Nellis began designing clothes in high school, when she made 15 prom dresses for her friends. The interest in design led her to Vancouver’s Emily Carr Institute of Art and Design, but she left when she realized there wasn’t a textile program. From that point, the designer taught herself to make hand-painted and handwoven textiles.

“I didn’t have formal [fashion] training, which I think was good,” said Nellis. “I wasn’t all caught up with having to do stuff in a certain way. I wanted to make clothing out of the fabrics that I had made and I approached it that way.”

Shortly after launching her line, Zonda Nellis was picked up by Saks Fifth Avenue in San Francisco. Today, however, the only department store she sells to is Saks in Saudi Arabia. Instead, Nellis focuses on her specialty store business, which includes about 25 to 30 accounts across the U.S., Canada and Europe.

Several years ago, Nellis added eveningwear to her label made of fabrics, developed with European mills, that run as high as $50 to $150 a yard.

“In Europe, it’s interesting, because the mills are very respectful of small producers like me,” said Nellis. “They like small people that do really interesting things. In America, it seems to be the dollar value of your company.”

On the cover of the most recent Bergdorf Goodman magazine, nestled between the lapels of an elaborately beaded Etro jacket, is an equally handcrafted necklace by Susan Green.

Although there’s no credit for the jewelry, the line is currently sold in the Artisans department at Bergdorf Goodman and at about 25 specialty retailers around the world, including the U.S., London, Saudi Arabia and Mexico. Green’s work comes straight out of her Santa Fe studio from the hands of her four full-time workers, as well as several other contractors in the area.

Though she has been designing her signature style for almost 30 years, most pieces are one-of-a-kind, something that’s equally important to her and her customers. Her clients, she said, range in their professions from stockbrokers to artists, but they all share an appreciation for merchandise with an artistic slant.

Her trademark includes a custom-designed metal clasp that twists into place and lies contoured around the back of the neck. The clasps are hand-wrapped using metal, silk and rayon threads. The latter two are hand-dyed by Green.

“The wrapping I do was on the first piece I made and I still do it,” said Green. “If you saw the first pieces, they look like they’re from another time and place, but you can’t quite put your finger on where. They were more primitive looking, like someone dug them up.”

To achieve the line’s sense of exoticism, Green counts on several contacts around the world that act as materials scouts.

“I have a young man who was in the Peace Corps in West Africa, and he goes to Morocco and other places,” said Green. “He doesn’t just do cities though, he goes off the beaten path and gets wonderful things. Then there’s an older Chinese man that gets me great old stones that are beautiful and have an age to them. They’ll buy it and bring it to me and see if I like it.”

Most recently, Green expanded into hand-beaded belts and said her next step is to link up with a fashion designer to supply her accessories for a runway show. She said she likes working with clothing designers and often creates necklaces to merchandise with collections.

“I will go into an Alexander McQueen store and it’s delicious to me,” said Green. “I want my work to be in places that reach people because I love to do it and I love to have a good showcase for my work.”

From Kathmandu to you.

Each designer created a rug that became part of Elson & Co.’s most recent collection called Fashion Underfoot. Elson & Co. is donating 10 percent of the sale of each rug to the Ovarian Cancer Research Fund and the Council of Fashion Designers of America’s Fashion Targets Breast Cancer initiative.

All rugs in the Fashion Underfoot collection, as well as those in Elson’s other lines, are handmade by Tibetans living in Nepal. To create the rugs, artisans employ an old Tibetan weaving process using the highly durable wool from high-altitude sheep. Average turnaround time for a rug is between 12 and 15 weeks and a 6- by 9-foot size runs from $4,500 to $5,900 retail.

The company was established in San Francisco about six years ago, but relocated to New York last year. Currently, the rugs are available at elsoncompany.com, ABC Carpet & Home in New York and various designer showrooms across the country.

After studying East Asian philosophy and Buddhism in college, Diane Elson left her native Cincinnati for a four-week trek in the Himalayas in 1993. While looking for a Tibetan prayer rug for a souvenir, Elson learned that many of the antique rugs and artifacts were likely stolen from monasteries and other sacred locales, so she decided to have one custom-made. This, in essence, became the rough outline for what was later to become Elson & Co.

“My parents thought I was crazy going to Nepal in the first place,” said Elson. “But I felt so strongly about it. I also feel really strongly about the people who work in the carpet houses and know what their lives are like.”