Hanky Panky has two things to celebrate for fall: its 30th anniversary in business and the launch of the first collection of bras bearing the Hanky Panky label. 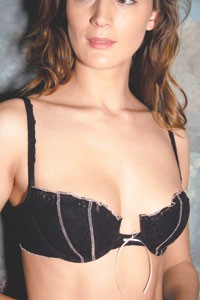 Hanky Panky has two things to celebrate for fall: its 30th anniversary in business and the launch of the first collection of bras bearing the Hanky Panky label.

Known for sleek and comfortable nylon thongs of signature lace, as well as a range of classic and fashion daywear and sleepwear items, the Hanky Panky brand is a consistent bestseller at major department and specialty stores as well as boutiques, according to retailers. Concept pieces were previewed in November, and a full collection will be unveiled at the Lingerie Americas trade show from Feb. 7 to 9 in New York. The collection also will be shown at the Hanky Panky showrooms on Park Avenue South during the next week’s New York market, and later will be exhibited at the CurveNV trade fair from Feb. 13 to 15 in Las Vegas.

The vintage-inspired line of bras and coordinating panties is designed by Gale Epstein, president and creative director of Hanky Panky, and innerwear veteran Joyce Baran.

“There’s a retro glamour to the line, a glamour from the World War II period. I think there’s a strong resurgence of that feeling taking place right now,” said Epstein, noting that the imagery will be reminiscent of Forties pinup girls and Vargas paintings. “It will be based on a sexy, playful glam girl.”

The collection consists of four signature stretch lace styles that can be matched with boy-cut briefs or thongs, including the trademarked Most Comfortable Thong. Styles include a contoured underwire demi-cup, a contoured triangle number, a smooth contoured underwire style and a fashion underwire demi-cup with contrast stitching. Underwire bra sizes range from 32A to 36D. Soft-cup styles go to 36C. Solid colors include black, pink, chocolate, taupe, wedgewood blue and ruby for holiday selling. There also is a leopard-printed signature lace style trimmed with black lace and a center-front mini black satin ribbon bow.

Several styles feature an “extra-support sling” at the base of the cup to lend additional support or place cookies to enhance push-up cleavage. Other special treatments include two strap sets at the back, one standard strap and one that is closer set, allowing each to be hooked together or be crisscrossed.

“We’ll probably offer a separate hook-and-eye that would act as a spacer for enhanced comfort,” Epstein said.

Deliveries begin July 25. Domestic and international distribution is aimed at stores that sell Hanky Panky products, as well as e-commerce businesses, including barenecessities.com, Figleaves.com and two major store Web sites: neimanmarcus.com and nordstrom.com. In addition to the U.S., the privately owned Hanky Panky, which generates estimated annual wholesale sales in excess of $50 million, is sold in Canada, Sweden, Japan, Italy and the U.K.

Berger added that the launch will be supported by outdoor advertising on kiosks in Manhattan near Lincoln Center, Grand Central Station and the Altman Building and Metropolitan Pavilion, where the Lingerie Americas show will be staged.