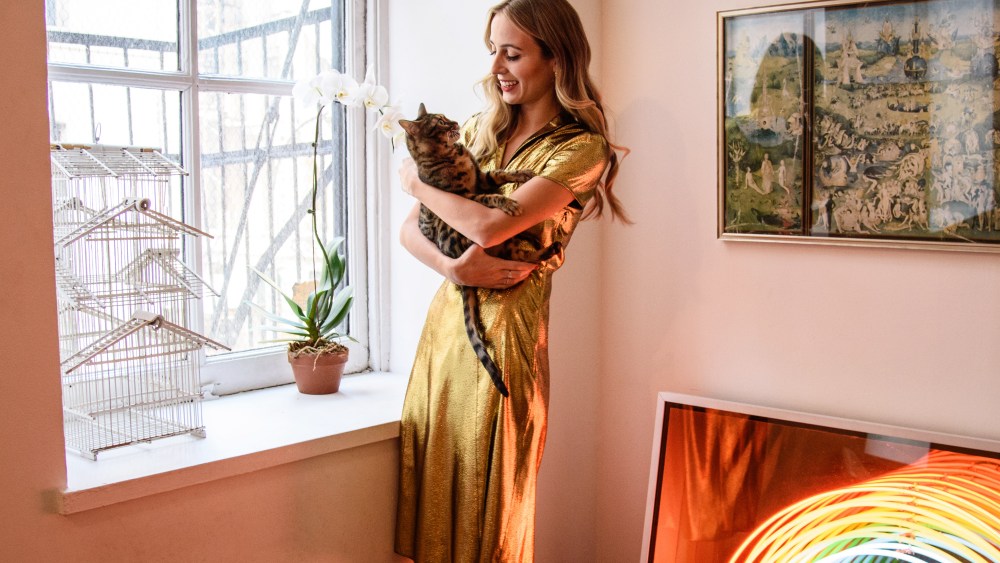 “The busy, effortless woman” is who Harley Viera-Newton says is most likely to buy her designs. Busy and effortless. What woman doesn’t dream of being both? For Viera-Newton, that dream is reality.

The 28-year-old DJ-turned-designer is gearing up for the release of her HVN Holiday Collection next month. The line features three of the four original HVN staple silhouettes — the slipdress with a belt, the pleated tank dress and the Forties dress with a shawl collar, all in silk lamé or printed silk charmeuse — in metallic and holiday-inspired prints. This time around, Viera-Newton also added something extra to cuddle up in during the colder months: pajamas, robes and eye masks, all in printed silk charmeuse.

“The pajamas and the robes came about entirely because I was getting such an amazing response to the fabric and to the way the silk felt,” Viera-Newton said while sitting in her SoHo loft. The bright, airy, trinket-filled space has previously been featured in Architectural Digest. “My friends were telling me that they were literally falling asleep in [the dresses] and wearing them every day, and I was doing the same because the silk feels really nice on the skin. So immediately, my first thought was, ‘OK, well maybe we can look into making little pajamas and robes out of this fabric.’”

The idea for a holiday collection came about after too many times of not knowing what to wear on New Year’s Eve. “I’m always DJing on New Year’s Eve,” Viera-Newton said. “When New Year’s comes around, I can never find a dress to wear and it’s always a mad scramble to find a shiny, pretty dress. I’m a sucker for anything metallic and shiny.…I’m like a magpie.”

Viera-Newton is the daughter of Capitol Music Group president Ashley Newton, formerly the president of Columbia Records, and former model Cristina Viera-Newton. She’s also the cousin of shoe designer Charlotte Olympia Dellal. Though she’s been vaguely associated with the fashion industry for a while, Viera-Newton’s official christening came about because of her career in music. She started DJing while attending New York University.

“I had a friend who is a DJ and his name was actually also Harley,” Viera-Newton recalled. “He said to me, ‘You know we have this gimmick, Harley and Harley. Let’s throw a night.’” She was hesitant at first, but after observing her friend, she decided to give it a try. “The party actually did really well, so we opened up a second floor,” she said. “I was hidden downstairs to experiment with DJing for the first time on the bottom floor and that’s where I got my start. I ended up doing really well and through that, I got my first solo gig at the Beatrice Inn. I ended up DJing with my friend Cassie Coane and together, we threw a party at Lit [on Wednesday nights]. It ended up going for four years. It was really great and messy and fun.”

Then came the e-mail from Dior. “When it happened, I thought it was a prank,” Viera-Newton said. “I got an e-mail from Dior and they were like, ‘Hi, we’d like to meet with you. I was working retail at the time and I showed my friend. She said, ‘Well, I don’t think it’s a prank because the e-mail is @dior.com.’ I was like, ‘I don’t know, I’m still not convinced.’ I didn’t believe it. I thought it was a joke.” She was hired as Dior’s house DJ and was also named a beauty ambassador for the brand.

The opportunity with Dior opened Viera-Newton’s eyes to the fashion world and in 2013, she collaborated with Diane von Furstenberg on an accessories line called DVF Loves HVN. Now, Viera-Newton has a line of her own. She looks to vintage Paco Rabanne dresses, Valentino’s “exquisite attention to detail” and “that incredible image of Kate Moss in the sheer silver slip” as inspiration for her designs.

In the beginning, Viera-Newton designed dresses she could see herself wearing. But that changed when her mother, her mother’s friends and her younger sister started trying the dresses on. “It actually really worked across different age groups, and different styles obviously worked for different women, but I thought that was so exciting that it really was ageless,” she said. “The dress really is a transitional piece in that way, where it can be worn to work, but then you can throw on heels at night and go out for dinner or go out for a drink. I just found that the pieces that I ended up wearing the most in my closet were those pieces that had multiple purposes.…I think that it’s really important that girls can invest in these items that you can actually really wear. Those are the pieces that you end up loving the most.”

Viera-Newton is interested in expanding HVN beyond dresses and pajamas, and she may already have something up her sleeve. “I feel like it’s gonna be a natural evolution,” she said. “There are a few things coming up for fall that are a gentle evolution, but I think the dresses will always be at its core. I’m such a dress girl. Dresses are my uniform. I think we’ll always carry out several of these silhouettes that have been strong for us. I think it’s really nice that women who have been buying the dresses have figured out the shape that works with their body and now they’re saying, ‘Great. I’ve figured out the shape that I love. I want it in all different prints.'”

One silhouette, endless designs. Just add a pair of heels, some red lipstick and a glamorous New York party and you’re on your way to being busy and effortless.