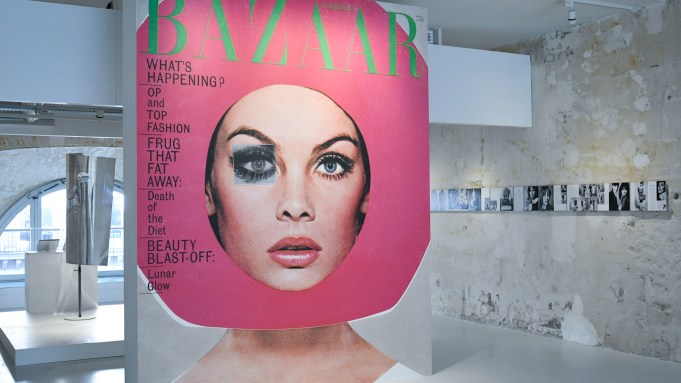 If you own a copy of the April 1965 edition of Harper’s Bazaar, put it in the safe.

It’s among artifacts on display at the new “Harper’s Bazaar — First in Fashion” exhibition at the Musée des Arts Décoratifs in Paris, and it’s a succinct time capsule of a truly groovy era, picturing members of The Beatles besides Jean Shrimpton along with Space Age fashions by Courrèges. Among the cover lines that year were “Beauty Blast-Off: Lunar Glow” and “Frug That Fat Away.”

Far more than an ode to print publishing, the showcase reveals how closely female dress is intertwined with the fine and decorative arts, popular culture and even literature, and how the lens of editors and art directors helped not only chronicle fashion, but shape it.

Olivier Gabet, director of the museum, said a conversation with Glenda Bailey, who is stepping down as editor in chief of American Harper’s Bazaar this month, about the blockbuster Dior retrospective in 2018 made him realize that it omitted an important third-party: Harper’s Bazaar and its then editor Carmel Snow, who championed Christian Dior and immediately grasped the significance of his first collection of pinch-waisted jackets and flaring skirts in 1947, which she dubbed The New Look.

The exhibition — mingling fashions with magazine covers, photos, videos and artworks — also debuts a radical new look for the museum’s fashion galleries thanks to a 2.5 million-euro donation from American businessman and philanthropist Stephen A. Schwarzman, chief executive officer of the Blackstone Group, and his wife Christine.

Previously a dim warren of fixed showcases, the space was stripped to the stone walls, giving it the airy feel of a contemporary art gallery with higher ceilings and exposed electrical cables.

“It’s given a lot of modernity,” said Pierre-Alexis Dumas, the artistic director of Hermès and president of the museum, lauding the contrast of the raw architecture and the refined artifacts on display.

“For a long time, you had this idea that fashion was in black boxes. The new galleries have enormous flexibility compared to conventional historic display spaces,” said Gabet, noting that the eco-friendly revamp offers state-of-the-art temperature and humidity control to protect the fragile works on display, including original hand-colored Bazaar covers by Belle Époque artist Eugène Grasset that were presciently already in the museum’s vaults.

“It has character. Now it’s the cool place it deserves to be,” said Christine Schwarzman as she took in views of the Tuileries Garden past a sweeping white staircase. On the opposite side of the room, in front of a window on to bustling Rue de Rivoli, was a glass case containing the half-finished toile of a Cristóbal Balenciaga dress immortalized by Marella Agnelli in the Fifties, echoing the stark, simple curves of the staircase.

The show can be enjoyed simply for the 60  dresses on display: sublime gowns by Madeleine Vionnet, jewel-toned gems by Alber Elbaz for Lanvin, mind-bending Dior couture by John Galliano, minimalist marvels by Helmut Lang, and otherworldly sheet-metal creations from the 1966 film “Who Are You, Polly Maggoo?” But it’s their dialogue with magazine covers, illustrations, photos, videos and objects that draws you in, projecting fashion into the realm of dreams and fantasy. “It’s a whole environment,” said Marianne le Galliard, co-curator of the exhibition with Eric Pujalet-Plaà, pointing to a Jeanne Lanvin gown whose graphic black and white pattern is set against an blown-up Erté cover depicting skyscrapers.

The exhibition unfurls chronologically, with visitors alighting upon a wall of magazines, surely a novelty in itself for young ones weaned on screens. Here, displays include almanacs from the 15th century — some of the first books printed in Europe — and early style gazettes in France.

The tag line for the first issues of Harper’s Bazar — launched in 1867 and then spelled with only one A — was “A Repository of Fashion, Pleasure and Instruction.” Its first editor, Mary Louise Booth, was a Francophile whose interest in art and literature influenced the title throughout its history.

Healthy doses of fantasy also defined the imagery across the ages, with celestial and mystical themes yielding to surrealism, and supermodels ultimately usurped by celebrities. Fashionistas will recognize famous photos by Peter Lindbergh and Jean-Paul Goude of Linda Evangelista. The show also highlight the contributions of art directors from Alexey Brodovitch to Fabien Baron.

The display culminates with the Glenda Bailey years, including a sneak peak of images from the latest March 2020 issues, and a making-of video. “People want to know more about what’s behind the images,” Gabet said.

The Bazaar exhibition runs until July 14 and is the first to reflect programming more eclectic than classic retrospectives and exalting the private museum’s vast collection of not only fashions, but photography, graphic design, furniture design, toys and advertising.