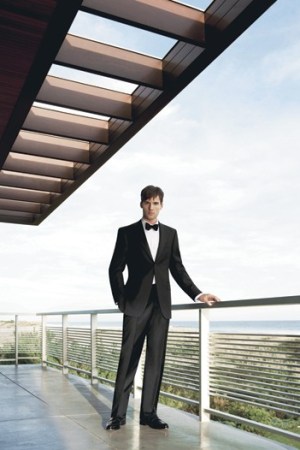 And they say only first ladies influence fashion.

This story first appeared in the January 8, 2009 issue of WWD. Subscribe Today.

This month, Hart Schaffner Marx will debut a line of in-stock tailored clothing based on the suits, trousers and sport coats it made for President-elect Barack Obama during his campaign this past fall.

The line, dubbed the Capitol Collection, will be available for spring delivery and demonstrates the company’s belief that Obama has not only inspired the public to get out the vote, but also to dress well. “Not in recent memory has there been such an emphasis on the business suit. From Henry Paulson to Barack Obama, the major figures in our collective conscious are dressing up,” said Brett Schenck, president of Hart Schaffner Marx. “These people send a serious tone across America that looking professional is important again.”

Chicago-based Hart Schaffner Marx, a brand that has struggled with its positioning in the last few years, has enjoyed unprecedented publicity since the former Illinois senator tapped the company to make a custom two-button navy suit for his speech at the Democratic Convention last August. Additional orders followed. He sported Hart Schaffner Marx again during his acceptance speech on election night, and last month WWD reported the President-elect would wear the brand’s tuxedo to the inaugural balls. In total, Obama ordered six suits, a tuxedo, a blazer and a few pairs of trousers from Hart Schaffner Marx, according to company sources.

Schenck said buyers and consumers alike have bombarded the company’s phone lines and Web site since August asking where they can find the product — demand that prompted the creation of Capitol Collection. But serving as the president’s unofficial first tailor has prompted the company to be circumspect as well.

The moniker Capitol Collection will only be marketed internally, according to Schenck. The Capitol Collection will not appear on the clothing’s hang tags or labels, nor will it appear in this spring’s advertising campaign or marketing collateral. “Confidentiality is paramount,” Schenck explained. He declined comment on any specifics about HSM’s relationship with Obama, and was quick to distance the collection from the specific items Hart Schaffner Marx made for the President-elect over the past few months.

But based on previous reports, it’s clear the Capitol Collection is closely modeled on the suits and sport coats Hart Schaffner Marx produced for Obama. Included in the collection: three notch-lapel, center-vent suits, the same silhouette made for Obama; two blue blazers, one of which has gun metal buttons, a detail Obama requested for his own blazer, as well as two tuxedos and two pairs of trousers.

As in Obama’s clothing, all trousers in the Capitol Collection eschew more contemporary flat fronts for rather traditional reverse double pleats. The collection’s better tuxedo, a one-button, notch lapel jacket, is the same model Obama is reportedly donning for the inaugural balls.

One major difference is price. Obama’s made-to-measure suits from Hart Schaffner Marx would retail near $1,400, but prices for suits in the Capitol Collection are less than half that. The suits, which come in navy, charcoal and a blue pindot, sell for $695; the blazers, of two different makes, will retail for $395 and $495. The line’s better tux tops out at $895.

“We’re dedicated to the price-value relationship,” explained Schenck. “That’s where the country is headed, and we are here to meet that demand.”

But will clothes made in Obama’s likeness sell?

For all the press Obama has received about his style, the President-elect wears fairly basic clothing. He prefers classic tailored clothing with an updated fit, not exactly the revolutionary tastes of most fashion icons.

But market sources said his ability to generate suit sales has less to do with the distinctiveness of his style and more with his appeal as a political figure. “If Donald Trump can set a fashion trend, so can Barack Obama,” explained Marshal Cohen, chief analyst for the NPD Group. “It’s the perfect time for this collection. The men’s market is looking for a way to get invigorated and the consumer is looking to preserve his job or get a new one. Dress is part of that puzzle, and when consumers are looking for style inspiration, what’s better than a politician who has just experienced a meteoric rise to power?”

Additionally, sources noted that when measured against most Washington wonks, Obama does have a look. The Hart Schaffner Marx suit he wore during his speech at the Democratic Convention is the model of how a contemporary suit should fit, they said. The two-button jacket is shorter, the shoulder and lapel more narrow. And whereas most politicians sport voluminous pants, Obama’s are slimmer, but not slim. In great physical shape and standing 6 feet 3 inches, he also has the benefit of a model’s frame.

“It’s not revolutionary, but he dresses his age and it looks good on him,” explained Rich Gualtieri, men’s fashion director for Lord & Taylor.

According to Schenck, major retailers including Dillard’s, Nordstrom, Macy’s, Belk and Lord & Taylor, have already committed to carrying the collection.

“When you have a political figure that has galvanized so many people, I feel that men will want to emulate that,” said Gualtieri, who said he asked his tailored clothing buyer to consider buying more Hart Schaffner Marx once he learned the brand was dressing Obama. “This bodes well for suit sales.”

Hart Schaffner Marx is already benefitting from the publicity generated by its association with Obama. Gualtieri put the brand on the opening spread for Lord & Taylor’s spring fashion book. “It’s made in America, updated classic, a good value and the President-elect likes it.” he said. “It’s right on trend.”