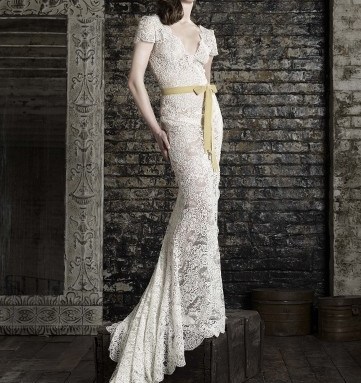 LONDON — Bruce Oldfield, who dressed Princess Diana and is a perennial favorite among the mothers and daughters of London society, is tipped to be the royal wedding dress designer — according to one bookmaker.

Paddy Power, the Irish bookmaker, said the odds are now 1-3 Oldfield will be Kate Middleton’s choice, and that it has suspended betting on the designer due to a recent “flurry of big-stake bets” of more than 500 pounds, or $780 at current exchange. The bookie said the odds on Oldfield “suddenly turned” in his favor on Friday.

“We saw this pattern of royal wagers with the venue and the date and they both proved correct,” said Darren Haines, a spokesman for Paddy Power. “Although we didn’t expect a betting plunge on the dress designer to happen quite so soon, when the stakes changed from fivers and tenners to hundreds of pounds, it appears as though the cat is out of the bag.”

A spokeswoman for Oldfield declined comment Wednesday, while a spokeswoman at Clarence House, where Prince William’s and Prince Harry’s offices are based, said: “No decision has been made. This is all just speculation.”

Oldfield, who has made one-off dresses for clients including Britain’s first lady Samantha Cameron, the Duchess of Cornwall, Sienna Miller, Charlotte Rampling and Queen Rania of Jordan, has been making couture dresses for 35 years and is a London fashion institution. Earlier this year, he opened a second atelier on Beauchamp Place, not far from Harrods, that offers a full bridal service. His custom-made gowns — which are famous for their clean lines and intricate detailing — start at 3,500 pounds, or $5,460, and he also offers shoes, jewelry, and accessories.

When the royal engagement was revealed last month, Oldfield told WWD: “If I was lucky enough to be asked, I’d be delighted. I’m already dressing her peers.”