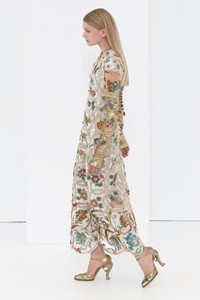 Chanel: Haute couture — an identity crisis? Hardly a new notion. But the latest manifestations of it are playing out lethargically in this disaffecting couture season. Even Karl Lagerfeld, whose haute bravado is typically unwavering, showed a peculiarly mundane collection for Chanel, one with the ring of chic, if not directional, ready-to-wear. Though Lagerfeld worked a Space Age-cum-Renaissance motif, the show was really about two things: first, another spectacular set, this time a tented affair with a circular floor that for the finale spun the audience around as the models posed in doorways; second, thigh-high denim boots and matching gauntlets, shown with all kinds of clothes, including a bounty of straightforward tweeds, typically black, white and meaty.

Which is not to suggest a dearth of haute accoutrements. In fact, Lagerfeld decorated everything in sight, from the models’ hair, strewn with pearls, to their feet, their boots occasionally replaced with mary janes teetering atop oddly sculpted heels. Rather, the rtw attitude resulted from the lack of wonderment the clothes elicited. The most impressive of Lagerfeld’s couture efforts have inspired awe over his ability to so brilliantly reinvent the Chanel wheel again and again; here, he merely put a perfectly OK luster on a wheel already parked in the drive.

Lagerfeld swung between linear Sixties shapes and soft volume derived from belled skirts, most of which came heavily embellished. Crisp shifts flaunted elaborate arrangements of banded ribbons; a pair of jacketed, drop-waist dresses flashed monster-stone embroideries, and a brown suit, thick fur outlines. The Renaissance mood derived from some fuller shapes that pouffed about the thighs like a balladeer’s breeches, a flamboyant magenta and embroideries of intricately worked medallions. Evening was something of a pastiche, ranging from black lace ingénue dresses to lavish, jewel-encrusted columns.

As for that demonstrative denim footgear, it made for a wacky touch, and one with serious possibilities, at that. But as the initial amusement faded, Lagerfeld did something almost completely foreign to a Chanel runway — he let his runway affectation du jour distract from the clothes. This did not, however, mask their wearability factor, and, in this season, there’s a lot to be said for that.

Christian Lacroix: Oh, we of little faith. Just as despair for the fate of couture starts to well up, in rushes Christian Lacroix in a flourish of haute glory. Fear not, he comforts the confounded with each exit. Real couture is still out there, and at its best, it can still take your breath away.

Lacroix is not without a theatrical penchant, expressed here in his models’ jeweled Prince Valiant wigs and colorful, opaque hose beaded past the ankle to extend the shoe’s decorative motifs. He opened with two of the most ordinary wardrobe items imaginable, trenchcoat and parka, elevating each to elitist perfection, the former a huge triangle tiered in back; the latter, a lavish fur-laden brocade over a simple dress. This proved a theme of the collection, as time and again, a model would slip off her elaborate coat — bands of fox and lace; fox-trimmed silver leaf on felt — to reveal a short, flirty dress. The notable control didn’t end there, as Lacroix also did a series of little black dresses sans coats that looked anything but anonymous.

Throughout, the lineup swayed from storybook fantasy to considerable restraint. One did notice the absence of the designer’s characteristic multifabric reveries, but this only allowed the clothes to breathe a bit more freely while radiating the same brilliance. Evening featured ballgowns with Old World constructions and intricately draped goddess jerseys. Lacroix also rendered a romantic, rumpled negligee in silvery organza over a blue Empire sheath with relative simplicity. As in simply divine.