What’s happening around town in the City of Light as couture week gets rolling. 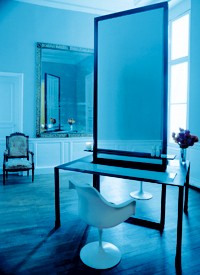 COUTURE COIFFEUR
Celebrity hairstylist David Mallett has replicated the decor of his home — where he’d been serving a smattering of private clients — in his new, larger Right Bank “coiffure studio.” The 1,110-square-foot space boasts an area for styling hair and another for coloring, so it’s possible for two clients to be treated at once, yet feel they’re getting individual, haute service. Already clients have been flocking in from as far as Canada, Italy and England. It’s no surprise, given Mallett’s star-studded client list: Emmanuelle Seigner, Drew Barrymore, Nicole Kidman and Elizabeth Hurley. A cut or color begins at $192 at current exchange rates, or 150 euros. Reservations are a must.
David Mallett, 14 Rue Notre Dame des Victoires, 331-40-20-00-23.

VIEW FINDER
Philip-Lorca diCorcia is the focus of a solo show at the National Center of Photography at 11 Rue Berryer. “A Storybook Life” consists of a series of 76 photographs, taken over the past 20 years, that document places and people who reappear and cross paths — creating a fresco of daily life. The exhibition, which runs until March 15, includes some of diCorcia’s most important works, such as a series of 11 photographs taken on a street in Havana in two hours. Meanwhile, hip boutique Colette has an exhibition of photos by Bruce Weber at its gallery.

BABY BOOM
Ovale, Boulevard Saint-Germain’s newest addition at No. 200, takes care of new additions. The chic, 750-square-foot boutique specializes in gifts for newborns, from silver rattles, cups and spoons to cashmere and linen clothing and stuffed animals. The white, beige and brown clothes are designed to keep the baby blues away. “Pink and blues make products look too cutesy,” said Gilles Neveu, the proud new owner of Ovale. Neveu, who started his career as a stylist at Christian Dior, designs the entire collection. It includes reversible cashmere coats for $265 and christening robes detailed with handmade lace that start at $765. Ovale will not remain an only child. Neveu plans to open locations in Geneva and Tokyo this summer.

CHICKEN TONIGHT
In yet another sign that the trusted bistro is Paris’ culinary comeback of the season, chef Guy Savoy’s new Atelier Maitre Albert on the Left Bank puts the accent on classic dishes such as roasted chicken, succulent duck and good ole steak. Of course, they’re all done with Savoy’s famous dash and served to perfection with such side dishes as pumpkin gratin or ginger cauliflower. The secret: the giant rotisseries Savoy has installed. They roast monkfish to perfection and give the chicken a delicious golden crust. The setting is casually sophisticated, with modern touches offsetting a centuries-old stone-carved chimney.
Atelier Maitre Albert, 1 Rue Maître Albert, 331-56-81-30-01.

BIG RED
In a stunning exhibition running through Feb. 16, the Louvre has assembled 70 pieces of porphyry, the reddish purple stone that, from antiquity to the reign of Napoleon, symbolized imperial aspirations and grandeur. One of the most difficult stones to carve, porphyry was also one of the rarest. Used extensively in Ancient Rome in architecture and sculpture, it was believed to exist only in remote Egyptian mines. When those mines were forever closed in the fifth century, artists and craftsman had to reuse already quarried porphyry for their creations. All the pieces in the Louvre show, including an arresting 17th-century bust of Alexander the Great and a bathtub said to have belonged to seventh-century King Dagobert, were carved from blocks or columns produced in Ancient Rome.

HAUTE STUFF
Though it will be their fifth couture outing, this season is special for Michel Dupre, 26, and Christelle Santabarbara, 24, childhood buddies known together as Dupre Santabarbara. It marks their induction into fashion’s most select club, as they participate as guest members on the official couture calendar, thanks to sponsorship by the house of Jean Paul Gaultier. Also, the duo has recently garnered a prize from the mayor’s office in recognition of their work, which transforms hosiery into high-fashion confections. “We like hosiery because it allows us to emphasize the body,” explained Dupre. “We use hosiery to build a puzzle, cutting out pieces and placing them into a mosaic with lace and embroidery.”

Meanwhile, Istanbul’s Dilek Hanif for the first time will show her frocks on the Paris runway. Known for mixing Ottoman flourishes and Western design, Hanif founded her house in 1990, garnering recognition by dressing such national celebrities as singer Hulya Avsar. She branched out into couture three years ago, and she hopes that showing in Paris will introduce her work to a broader audience.

SWEET SENSATION
Chocolate maker Pierre Marcolini’s first Paris store, a 555-square-foot shop at 89 Rue de Seine, is as luxurious as his sweets, which are made the old-fashioned way. The lineup includes creamy chocolates infused with Earl Grey tea, aromatic bars, plus oodles of chocolates stacked in bag-shaped boxes. Prices run about $115 at current exchange, or 90 euros, per kilo of chocolate.

PAVED IN GOLD
What better display for a new jewelry collection than a boutique no larger than a jewelry box? At Karry’O, 60 Rue des Saints-Pères, designer Karine Berrebi displays her voluminous rings and earrings accompanied by necklaces with pendants in the shape of large Georgia O’Keefe-like flowers. Prices range from $229 to $330. Inspired by designs from the Forties and Seventies, Berrebi also has a collection of vintage jewelry, priced from $1,900 to $12,722.

LADIES FIRST
Women industrial designers own the spotlight at an exhibition devoted to their works. Tucked underneath the arches of the recently renovated 1850s viaduct linking the Bastille to the outskirts of Paris, French design association VIA mounts a show entitled “Design d’Elles” to promote women designers in industry. More than 50 women are represented, with work spanning lighting, rugs and small design objects.
VIA, 29 Avenue Daumesnil.

JEWEL BOX
Victoria Casal is the kind of girl who likes wearing a $20,000 diamond necklace with Diesel jeans. And with her new boutique on the Place Vendôme, Paris’ fine jewelry nerve center, the vivacious designer hopes she’ll be able to convince more women to do the same.

Casal’s 600-square-foot shop is decorated with pink sofas, taffeta curtains and dark-wood display cases. It is the designer’s fourth, after Moscow, Cannes, France, and Eliat, Israel, and is tucked into a discreet courtyard between Boucheron and Van Cleef & Arpels.

“My message is meant to appeal to women’s frivolous side,” she said. “My work’s fun and very feminine. I think women want to wear fine jewelry like they wear a handbag. It’s an accessory that’s meant to give a shot of energy to their clothes.”

Her diamond-encrusted dog tags and key pendants in diamonds and mother-of-pearl surely do. Ditto for rings boasting gigantic precious and semiprecious stones and “girlie” references, such as flowers, stars and numbers. Prices range from about $500 to $30,000.

Casal started her business four years ago with her husband, Jean-Luc, and now has several projects in development, including lines of T-shirts and handbags, scheduled for spring and fall launches, respectively.

Meanwhile, she’s gearing up for the launch of Hello Kitty fine jewelry, for which she holds the worldwide licensing rights. “A jewelry house has to have an animal in its repertoire,” she said. “Cartier has the panther. Hello Kitty’s much more my generation. We grew up with it. It’s just so fun.”

ALPHABET CITY
Just off the Champs-Elysées, the new A Hotel takes the artsy route. Frederic Mechiche designed the hotel and contemporary artist Fabrice Hybert was in charge of the decor. The lobby and bar have a SoHo vibe, while Hybert hung one of his humorous paintings in each of the 26 rooms. The hotel is resolutely modern and minimalist, welcoming only adults and no pets. Rates range from $245 for a single room to $600 for a suite.
Hôtel le A, 4 Rue d’Artois, 331-42-56-99-99.

COFFEE CLASH
If drinking strong coffee in tiny cups at small tables is not your thing, Paris can be a caffeine addict’s nightmare. No more: Starbucks is slated to open its first location Friday at 26 Avenue de l’Opéra, just in time for couture week. Sipping lid, anyone?