Clubland antics and front-row transvestites made for fun times, but Heatherette's designers knew they needed a partner to build their business. 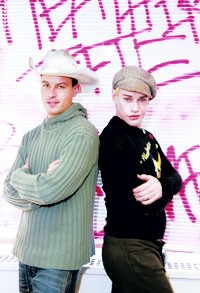 NEW YORK — Clubland antics and front-row transvestites guarantee fun times for all, but Heatherette designers Traver Rains and Richie Rich have learned a crucial lesson: They needed an experienced partner to build their business.

Media attention and hype are fine, but for all the publicity the duo garnered with their madcap shows since they launched their label in 1999, Heatherette never had the means to put together a saleable collection and, save for a few T-shirts here and there, didn’t have any distribution.

“The industry buzz was always, ‘Where do you sell?’” Rich conceded. “I would say, ‘We are trying to sell but the shipments are late. We don’t have the right production. But we’re really good at posing for the right pictures.’”

Rains added, “We tried to do it from the ground up, doing shipments and learning the business as we went along. Needless to say, it was a long struggle to keep that side going, and we decided to focus on press and on building the brand image, not so much on sales.”

But after five years of carefully cultivating this image, Rich and Rains are ready to capitalize on their hype and translate it into a business that could rake in sales of up to $10 million next year. To that end, the duo partnered with Norman and Bruce Weisfeld, managing partners of the Weisfeld Group, which is also an investor in Fubu and Coogi, last September. Together, they created Heatherette LLC.

Beginning with the fall collection, which is to be presented at Bryant Park this Friday, the plan is to distribute Heatherette to contemporary departments at 300 to 500 upscale department and specialty stores. The future strategy also calls for such products as handbags, sunglasses, men’s wear, infants’ wear, beauty and even home.

“I saw in Heatherette something very similar to Fubu,” said Norman Weisfeld. “It was niche marketing with a very strong message that’s easy to translate into action. We take the artist, take the talent and merge them with an infrastructure. We saw that Heatherette could easily fit into our infrastructure.”

The partners hired Elissa Bromer as president of sales and marketing. She was previously group president of the licensed Nicole Miller sportswear collection at Donnkenny Inc. Before that, she was president of the Perry Ellis women’s division at Public Clothing Co. They also put in place a design and technical team, many of whom were recruited from Betsey Johnson.

True caricatures that are increasingly hard to find in turn-of-the-century New York, Rains, 27, and Rich, “of the cartoon age,” recall an imaginary time when Deee-Lite was the city’s running soundtrack, nannies actually sounded like Fran Drescher and gay men dressed like the Village People and hummed “YMCA.” Indeed, editors, buyers and hangers-on were always in for a fun ride at their runway shows, which have featured Boy George, Anna Nicole Smith and Paris Hilton making their way down the catwalk to an audience of Liza Minnelli and ladies of a different kind with names like Brandywine and Cody Ravioli.

The duo met in New York in the Nineties. Rich, the colorful club-kid type who was once a competitive figure skater, assisted the party impresario Suzanne Bartsch. Rains, the seemingly more introverted of the two, had won more than 100 titles at national horse shows before earning a degree in economics and international business and moving here. Bartsch, whose son, Bailey, took horseback riding lessons with Rains, introduced the two.

“We both were chatting about clothing, then we became friends, and then the T-shirt business came from the ground up,” Rich recalled. “The demand became crazy with our friends, and Patricia Field asked us to make one for Carrie on ‘Sex and the City.’”

Jean Challner, a Wall Street investment banker and friend of the designers, convinced them to seek financial help.

“We started looking for somebody with an infrastructure who knew how to put a saleable line together and how to approach stores, and how to do all the production and distribution,” Rains said. “It took hundreds of meetings.”

Weisfeld added that he would like to grow the business “organically” rather than force inventory on stores.

“We are committed to do a lot of different products at first, but want to keep it limited in scope so that we are not chasing volume in this deal, but we will chase integrity and try to create a name for Heatherette,” he said, “Then the volume will come after.”

The fall collection will have a wholesale price ranging from about $35 to $350. It will be manufactured in Los Angeles and in Asia. Weisfeld said Japan will be Heatherette’s next market to expand into, though likely with a licensee.

“The key is to limit the distribution at first to 300 to 500 stores, and then build them within that with classifications,” Bromer said. “They have niche businesses, from T-shirts that never really developed to these great iconic graphics that really no one else is doing. There is potential to do other classifications. I see Heatherette doing lingerie, handbags, pajamas, accessories, cosmetics…”

“…Heatherette home, Baby-ette,” Rich chimed in. “And there is a big gap in the hosiery world. Patti Wilson [Heatherette’s stylist] just told us, ‘Do hosiery first. Nobody is doing it, it’s impossible to find hosiery unless you’re in France.’”

The duo also plans to put together a complete men’s wear collection. The designers typically pepper their runway with a few men’s looks, but these were more runway gimmick than reality.

“We will probably go into men’s in about two years, but it will be under a different name,” Rich said. “If you’re going to be a metrosexual or the hottest gay guy, you will embrace Heatherette and throw the T-shirt on, but then there is that guy who is a little scared of stealing his girlfriend’s T-shirt. I think of my two older brothers. They’re jocks and they wouldn’t wear my clothes if it said Heatherette on it.

“It’s like Ralph Lauren,” Rich continued. “You wear the polo shirt, but there’s a whole lifestyle that you can create.”

This Friday, at Heatherette’s fall show in the Bryant Park tents, Miss Piggy is expected to be a front-row presence. Called “Living Dolls Collection,” it is inspired by toy factories, and the duo will present an increased focus on knitted separates, outerwear, denim and printed hosiery, which was made by StockinGirl.com for the show.

“Now we have so many more resources to work with, and it’s all the ideas we never followed through with because we never had the resources to do it,” Rains said.