The retailer is launching a line of T-shirts with art work designed by the model's six-year-old Johan. 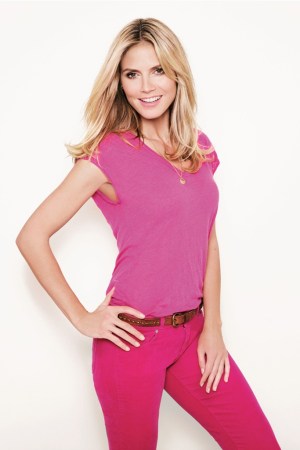 It’s been a quite a week for Heidi Klum.

Following a harrowing experience Sunday on a family vacation in Oahu, Hawaii, where Klum saved her seven-year-old son, Henry, from drowning in a dangerous riptide, the model-turned-supermom is now poised to embark on a fashion adventure with another son, Johan.

Babies ‘R’ Us Thursday will unveil a line of T-shirts with art work designed by six-year-old Johan. The fun, monster-themed T-shirts will be part of the company’s exclusive Truly Scrumptious by Heidi Klum collection of apparel and home accessories.

Klum — a longtime Victoria’s Secret Angel and cohost and judge on “Project Runway” — signed a deal with Babies ‘R’ Us, a unit of Toys ‘R’ Us Inc., in April 2012.

“As a mom of four, I’m constantly drawing design inspiration from my kids, whether it’s their unique fashion sense, their latest art project or simply their zest for life. Johan is supercreative, and I knew I wanted to incorporate his whimsical and imaginative designs into my Truly Scrumptious collection in a very special way,” said Klum. “I’m so proud as a mom and a designer to introduce this one-of-a-kind assortment of T-shirts to Babies ‘R’ Us customers in conjunction with my all-new summer apparel collection.”

The launch of specially designed T-shirts is being implemented to help inspire creativity among children while raising awareness for the retailer’s longtime charitable partner Save the Children. The T-shirts will be launched online at babiesrus.com/heidiklum and rolled out to Babies ‘R’ Us stores nationwide next week. In conjunction with this initiative, Babies ‘R’ Us has donated $50,000 to help Save the Children provide support to young children in impoverished regions around the U.S.

Inspired by Save the Children’s licensed art contests, Babies ‘R’ Us is also launching the Project Doodle Contest to celebrate the introduction of the limited-edition T-shirt line. Beginning today, budding artists ages 8 and younger can visit babiesrus.com/heidiklum or the company’s Facebook page, facebook.com/babiesrus, to create and share their designs using Doodle.ly, a digital sketch pad. Through this contest, two designs will be chosen to be featured on T-shirts, which will be sold at the retailer’s brick-and-mortar stores nationwide and online as part of the Truly Scrumptious by Heidi Klum collection this fall. From April 23 through May 6, Klum will lead a panel of judges in choosing 10 finalists. From May 8 through May 13, fans of the company’s official Facebook page can vote for their favorite design in both the boy and girl categories and help select two grand prize winners. Each of the two grand prize winners will receive pieces from the entire clothing collection for fall.