NEW YORK — Helmut Newton, the legendary photographer whose sexually provocative images captured everything from Yves Saint Laurent in the era of Le Smoking to Amazonian women in corsets and Wolford tights, died on Friday in a car accident in Los... 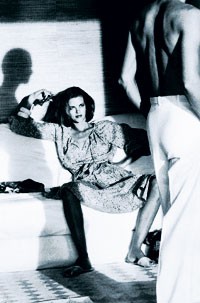 NEW YORK — Helmut Newton, the legendary photographer whose sexually provocative images captured everything from Yves Saint Laurent in the era of Le Smoking to Amazonian women in corsets and Wolford tights, died on Friday in a car accident in Los Angeles. He was 83.

According to witnesses, Newton had gotten in his car outside the Chateau Marmont, where he resided with his wife June during the winter months each year. He began to drive slowly out of the driveway, then lost control and collided with the wall on the opposite side of the road. He was rushed to Cedars Sinai Hospital, where he was pronounced dead around noon local time.

For more than 40 years, Newton was one of the most prolific photographers in fashion. His controversial photographs appeared everywhere from Vogue to The New Yorker and he became associated with many designers whom he worked with, none more so than Saint Laurent.?

“We have lost a superstar of photography,” said the designer. “He started the S&M trend and he was one of the stars of the Pop period. Technically, he was irreproachable.”

He was however, wildly influential. One can see his techniques in the shoots of Ellen Von Unwerth, Deborah Turbeville and Steven Klein. In fashion, his sensibility has colored the sexually charged work of younger designers like Helmut Lang and Tom Ford.

“I think that Tom’s idea of the strong woman with the makeup and the heels and the groomed hair and the strong mouth was influenced as much by Helmut’s photography as the clothes of Saint Laurent,” said Anna Wintour, editor in chief of Vogue.

Indeed, Ford himself said, “His photographs are burned into my subconscious.”

“We always looked to Helmut for something provocative and surprising and wicked,” continued Wintour. “When we did our Shape issue he immediately called with the idea of pairing a plus-size model with a little diminutive man. He could always put a twist on things. When we asked him to do high heels, he put Nadja Auermann on crutches. He always wanted to know how much hate mail we were getting on his pictures.”

Newton was born Helmut Neustadter in Berlin in 1920 on Halloween, the son of a widow and a bourgeois button manufacturer, who was also a secular Jew. His mother had a child from a previous marriage and although her second marriage was a terrific one, it was not entirely conventional. His parents had been married the previous March. His mother told her son that he was born two months premature, but family friends later told Newton this was simply to cover up that that she was two months pregnant when she married his father.

Newton grew up in the Weimer Republic in the decadent era of post-World War I Germany. Although many artists obsessed with sex are the ones repressed by it, Newton’s childhood points to the opposite.

“Berlin was always a city of music,” he wrote in his memoir, “Helmut Newton: Autobiography,” published last fall. “Throughout the Twenties and Thirties, American jazz bands performed regularly in the clubs and cabarets and were immensely popular. We were mad for jazz. I especially loved Cab Calloway, Jack Hylton, Duke Ellington, and all the Big Bands.”

As a child, Newton and his friends would skip school to go to the bars along the Tauentzienstrasse, where they would smoke cigarettes and dance with housemaids. “We only did it to get a hard-on and try to rub ourselves off against them,” he wrote.

When he lost his virginity at the age of 14, his mother gave him condoms, and told him only to have sex once a week, saying that sex would?distract him from his schoolwork.

She was right. He was a terrible student.

By this point, he was already taking pictures, having gotten his first camera at the age of 12. His parents asked him what he wanted to do. He told them he wanted to be a movie cameraman or a photographer.

“All you think of is girls and photos,” complained his father.

At the age of 18, the Nazis rounded up his father. Young Helmut spent two weeks in hiding, before his mother learned of a postbox at the Gestapo headquarters?where one could post a letter to, and get a release, as well as passports to leave the country.

Thanks to a kindly Gestapo officer, Newton’s father was released and the family was able to get passports to leave the country. Weeks later, Helmut boarded a train to Singapore.

All of this infused his later work. Straddling the line between fashion and pornography, Newton would photograph Amazonian women in erotically charged situations that expressed an adolescent wonder at the female body as well as a sense of something darker lurking underneath. The woman in high heels would be enticing, but the mix of stark lighting and her shadow looming prominently behind her suggested something kinkier, dangerous even.?It is, of course, the product of a young man whose sexual awakening was interrupted by the Holocaust. His photographs captured the opposing forces of desire and guilt.

“He would look at violence, it could be a war picture, something he saw in the paper, things stuck with him,” said the stylist Polly Mellen, with whom he worked for Vogue in the Seventies. “He would transfer a thought that was part of seeing something morbid, something that would trigger him.…It was a whole different thing from beauty. He awoke in me salacious thoughts. Pornography is something that always interested him. There was this ‘yes, OK Helmut, but that’s pornographic’ and so then we would bring it back to something that’s more mysterious. That’s what interested him. He took it further than any photographer I ever worked with aside from Terry Richardson, but it was always classy, always glamorous. The word was suggestive.”

His work went beyond fashion photography. In the Eighties, Tina Brown called on him to work for her at Vanity Fair and then at The New Yorker.

“His first great coup was to do a photo of Claus Von Bulow in head-to-toe black leather on the eve of his trial to go with Nick Dunne’s coverage,” Brown remembered. “It made a news sensation and of course was reproduced everywhere.…He did my very first cover of Vanity Fair of Daryl Hannah blindfolded with the cover line ‘Blonde Ambition,’ very S&M for the Eighties. He would often call and say, ‘Give me a hot assignment. I feel like ambulance chasing.’ He loved working for the New Yorker for the same reason. He got to do powerful portraiture, like one he did of a death-penalty judge with his coat flying like a cape of evil.”

“His life and his closeness with June was very important to his work,” explained Wintour. He met June Browne in 1946 when she came to see him about modeling work. They married two years later, and she was a frequent subject for him until the end of his life. Newton even photographed her as Adolf Hitler.

Recently, when his health was not as robust as it had been, he became interested in doing shoots in hospitals with doctors.

His friend Karl Lagerfeld pointed to the way in which Newton’s own experiences infused his imagery. “If he would have seen his accident, he would have taken a picture of it,” the designer said.