Henrik Lundqvist: Style on the Ice

The New York Ranger has had quite a year, even if his team didn’t win the Stanley Cup.

By Jean E. Palmieri
with contributions from Adam Perkowsky
on September 27, 2012
View Slideshow 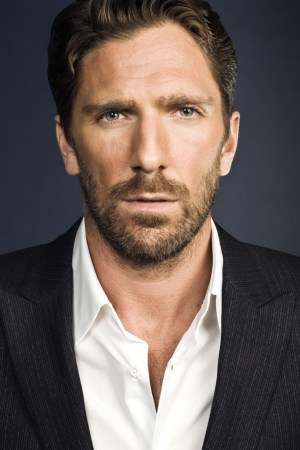 It’s been a big year for Henrik Lundqvist.

The goalie for the New York Rangers not only snagged the coveted Vezina Trophy, an award that honors the league’s best goaltender, but he turned 30, welcomed his first child into the world and nearly helped take his team to the Stanley Cup playoffs.

“The last 12 months have been something,” he said, shaking his head.

Although contract disputes have led to an owner-imposed lockout that will delay the start of the current National Hockey League season, Lundqvist has been working out and keeping in game shape throughout the summer and will be ready to return to the ice when a settlement is reached.

Off the ice, he’s also been a front-row regular at fashion shows in Europe and New York as he indulges his other passion: dressing. He’s been singled out as the Best Dressed in Sweden, named one of People Magazine’s World’s 100 Most Beautiful People and most recently was honored as the Most Stylish Athlete at the ninth annual Style Awards during New York Fashion Week.

“Playing sports and growing up in Sweden as a kid, I didn’t follow fashion,” he says. “But by the time I hit 16 or 17 and started making my own money, I bought my own clothes.” He admits with a chuckle that for the first five or six years, he wore “a lot of bad looks,” while searching to find his own identity.

Fast-forward to 2005, when he joined the Rangers. “Once I moved here, I was able to find my own style and what’s really me,” he says. “I’m 30 now, and for the last six years I’ve been dressing the same way. I’ve found my road.”

That road is paved mainly with tailored clothing. Always impeccably dressed, his style is very European, with slim-fit suits his number-one choice; he’s rarely seen in shorts, jeans or T-shirts. He generally opts for traditional black, navy or gray and leans toward Calvin Klein, Tom Ford, Hugo Boss and Tiger of Sweden.

“I like to dress up,” he admits with a shrug. “I probably wear a suit three to four days a week. I just feel comfortable in that. I don’t follow trends, but I try to find things that have a little edge to them.”

And he uses his extensive wardrobe to hit the myriad events on Manhattan’s social calendar.

Living in New York, he says, “the possibility to do things is endless. I know the hockey world really well” but going to fashion shows and other A-list events allows him to “meet other types of people. It’s another world, and it’s fun and interesting.”

By always dressing well, he also does his part to bring hockey’s fashion reputation up a notch. “A lot of the guys dress well,” he contends. “But some guys are still old-school. Hockey is still really old-school, but that’s beginning to change. It comes down to whether they care or not. A lot just want to be comfortable.”

He pointed to his former teammate Sean Avery as another good dresser, who “knows a lot about fashion and clothes.”

But as much as he relishes the fashion spotlight, Lundqvist knows that at the end of the day, it’s his ability to defend the net that is his real claim to fame.

Lundqvist and his twin brother, Joel — who played for the Dallas Stars and is currently team captain of the Frölunda HC in Sweden — chose ice hockey over skiing, the sport of choice for most other Swedes. As the story goes, the boys’ coach one day asked for a volunteer to play goalie and Joel raised his brother’s arm. Henrik didn’t hesitate.

“I was a goalie in soccer as well,” he recalls. “You get more respect, you’re the last guy out there.”

He started his professional career in Sweden in 2000, and his skills kept improving, and by 2005, he broke Sweden’s national records for the lowest goals on average (1.05), highest save percentage (.962) and most shutouts in a season (six). He was named best goaltender, best player and was voted the league’s MVP.

That caught the attention of the Rangers, who brought him on board as goaltender for the 2005-06 season. He finished the year with 20 wins, earning him the nickname “King Henrik.”

Arguably his highest achievement to date came in 2006 when he led Sweden to a gold medal at the Winter Olympics in Turin. However, there’s one thing missing from his repertoire: the Stanley Cup. The Rangers finished first in the Eastern Conference last year and were two points shy of the best record in the NHL. Although they won their first two rounds in the playoffs, they fell to the Devils in the Eastern Conference Finals in six games, the last loss coming in overtime.

“By the time I retire, I want to have both,” he says of the Stanley Cup and Olympic medal. “Physically and mentally, there’s more to winning the cup. The Olympics is just two weeks, and there’s one gold-medal game, so there’s more pressure if you happen to have a bad day, but for the cup, you have to work hard for eight months.”

Although disappointed to come up short last season, Lundqvist believes the Rangers squad has the wherewithal to contend again this year — once the labor dispute is over. “We have the team to do it,” he says. “I just hope we can handle our own expectations and manage the people around us who expect us to go even higher this year.”

Playing in New York has its advantages in terms of fame and exposure, but it can also put a lot of pressure on an athlete. “To play here, you have to block everything out and stay confident,” Lundqvist says. “You have to remember that you’ll have ups and downs. The fans will let you know if you’re not playing well, but that’s what makes it so special and fun to play here. You work really hard to earn their love and respect, and the hockey fans in New York love their team.”

He says that as a goalie, “the toughest part of the game is the mental aspect. You have to deal with pressure and keep focused.” He says that most NHL goaltenders are of similar ability, “so the difference between a good goalie and a great goalie is how you focus, and making the right decisions under pressure.”

While he’s waiting for the season to start, Lundqvist will also continue to focus on his charitable endeavors. In 2009, he became the Rangers spokesman for the Garden of Dreams Foundation that grants wishes to sick children. In February, he teamed up with John McEnroe for a “Rock of Dreams” concert that raised funds for his charity as well as McEnroe’s tennis academy.

“I play the guitar a little,” Lundqvist says. “I’m not very good, but I have fun doing it.”

He says he had run into McEnroe at several concerts over the years and they sometimes “played a little. So I asked him to do the concert, and he did. It turned out great. We’ll definitely do it again, but it will be bigger and better.”