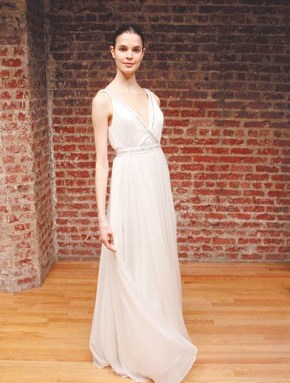 NEW YORK — Marchesa gowns, which have graced plenty of red carpets, will soon be making their way down wedding aisles, as well.

Designer Georgina Chapman, who cofounded the label with Keren Craig, has created a capsule bridal collection, which will be unveiled exclusively at Bergdorf Goodman later this month and will mark another milestone in the company’s rapid growth in the past two years.

The bridal collection takes its creative cues from Marchesa’s romantic evening dresses, from Grecian draping to Empire waistlines, delicate embroidery and ruffles and roses embellishments — but this being bridal, the looks will naturally be in a hue of white.

Chapman said bridal was a natural extension for the label that has made its mark in recent years in special occasion wear. In fact, she said, many brides-to-be had approached her about offering versions of her Marchesa gowns in white.

“I have met a lot of people who have worn our dresses for their brides’ dresses, and we have had special requests to do dresses in white,” she said, sitting in Marchesa’s showroom on West 14th Street here. “We have found a trend of women who wanted something a little more simple. They didn’t want a big dress, but something that felt more comfortable. Nowadays, there are women who are so used to wearing jeans and tops during the day that it’s a big leap to get into a huge dress and a corset. It’s really those women we wanted to do something for, and for somebody who is doing a smaller type wedding, maybe in a registry office or just back at their house.”

And so Chapman decided to make seven dresses available off-the-rack rather than the typical custom-made gowns offered in upscale bridal salons. Instead of selling the collection through the specialty store’s bridal salon, it will be merchandised at Bergdorf’s “Couture Evening Salon” on the fourth floor, which also sells Marchesa’s evening gowns.

Linda Fargo, Bergdorf’s senior vice president, fashion office and store presentation, said the line fits into the eveningwear area. “When you’re shopping in a bridal salon, it’s more of a formalized, semi-couture experience, and usually requires two fittings, potentially over a six-month-period. We felt this allows for a less formal process. We have also asked them for some of their shorter cocktail pieces in white for brides who want something much more casual, and perhaps something for a beach wedding.”

And, Fargo added, the strategy comes with other pluses. “Not everybody who wears white is only wearing it for a bridal moment, so you have the product exposed to a wider audience,” she said, adding Marchesa’s aesthetic lends itself well to the bridal category. She remembered how a friend of hers found herself scrambling to find an appropriate gown three weeks before her beach wedding. “She came to me in a panic,” Fargo said. “I said, ‘Give me a minute, I will run through the store.’ I put her in a Marchesa Notte off-white little Grecian goddess with a wide band of embellishment in gold. She just wore little gold sandals, and she looked so beautiful.”

It might seem surprising to some, but Chapman’s own experience as a bride — she tied the knot to Harvey Weinstein last December — did not trigger the bridal collection.

“I remember what I was like as bride,” she said, chuckling. “I really wouldn’t want to deal with myself. That’s why we’re doing it off-the-rack.” Chapman recalled working on her own dress the week before the wedding when she nearly “screwed things up.” “I thought, ‘All right, I will have to do something else,'” she said. “The tulle came back from India brown. I thought, ‘Oh, that’s nice, a brown wedding dress.’ We had to wash it for hours and repaint it all.”

She admitted, though, that organizing her own wedding may have given her valuable insights into wedding gown dos and don’ts. “Designing my own dress for my wedding, I saw the bride’s perspective rather than the designer’s perspective,” she said. “I also wanted something so that one day, my kids won’t roll about laughing, saying, ‘Oh my God, that was so 2007,’ or something that has me cringing every time I get out the photographs. You want to look beautiful and feel comfortable. You don’t want to feel awkward on your wedding day.”

Brides-to-be can start ordering from a sample collection at Bergdorf’s later this month. The store will receive actual stock in July. The collection will be priced at retail from about $3,500 to $10,000, which is comparable with Marchesa’s evening-wear.

Chapman plans to gauge customer reaction to determine the next move. “That’s been our ethos for the whole of Marchesa,” she said. “It’s been an organic process. We’d like to start small, and then gradually grow.”

The bridal launch is Marchesa’s first extension since Chapman and Craig launched their eveningwear and diffusion Notte collections at retail in 2006. They founded Marchesa with one-of-a-kind, custom-made gowns in 2004.

As president, Edward Chapman’s mandate has been to help build an infrastructure to support the designs. Marchesa now employs a staff of 30 in its 5,000-square-foot Meatpacking District headquarters.

The recent growth also crystallized the different responsibilities Georgina Chapman and Craig have for their label. While there is an industrywide perception the two are co-designers, Chapman creates the collection concepts and designs, while Craig supports her ideas with textiles she sources worldwide and works with retailers.

“The fast growth of the company is exciting for everyone involved,” Craig said. “It has really helped Georgina and I define our focus, and formalize what our roles have been for the past couple of years. With Georgina as the designer and creative director, my role has been primarily to focus on the business side, overseeing the commercial direction from a retail standpoint and supporting with the development of textiles.”

“They are able to bring this fresh young attitude, the romantic spirit and a lot of classicism, and bridge a lot of those ideas to create beautiful clothes,” Downing said. “And certainly, the fact that those clothes appear on the red carpet is a plus. We look at red carpet for evening direction as much as we look at the runway.

“They have continued to grow it at a pace that they were comfortable with,” Downing continued. “Instead of just making clothes for the sake of more clothes, they have added more pieces, more quality and more distinctive design details that speak to their own aesthetic, without losing any of the charm of what Marchesa really represents for the customer.”

While the red carpet carried much of the label’s buzz in the early stages, the focus has arguably shifted in recent months. It was a deliberate move for Chapman and Craig. “At one point, the red carpet helped us achieve commercial success, which is what every business and designer wants, but from a fashion point of view, there was definitely a stigma of it being a red-carpet label,” Chapman said. “But had we not had the red-carpet success, we wouldn’t have the financial ability to be able to do that in a presentation. I am now in a fortunate position where I can also make editorial pieces.”

With bridal under way, the company is currently evaluating future growth initiatives. They include further growing the distribution network for Marchesa and Notte in markets such as Russia, the Middle East, the United Kingdom and the rest of Europe.

“It would be very logical for us to do an evening bag to go with our dresses,” Chapman said, adding she has also been mulling a move into caftans, swimwear and even daywear. She stressed, though, that everything will come in due time.

“I think we have a nice niche market at the moment,” she said, “And I need to be respectful of people who work very hard here, make sure that everything is achievable, and not set unrealistic goals at the moment.”