NEW YORK — At a decidedly nonfashion-type affair — complete with a flamenco dancer and a portrait unveiling — Carolina Herrera picked up the second annual gold medal for fashion on Tuesday night from The National Arts Club... 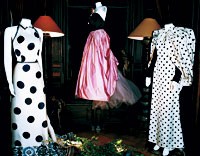 NEW YORK — At a decidedly nonfashion-type affair — complete with a flamenco dancer and a portrait unveiling — Carolina Herrera picked up the second annual gold medal for fashion on Tuesday night from The National Arts Club here.

With its eclectic decor and stately rooms, the national landmark at 15 Gramercy Park South, which served as a backdrop for Martin Scorcese’s “Age of Innocence,” was the ideal setting to honor a woman known for her refinement.

Some of the designer’s ballgowns and delicate dresses made for a dramatic display in the parlor. After dinner, Herrera held her own in the dining room, surrounded by oversized photos of herself and a recently painted portrait by Wendy Shrijver that now hangs in the club.

Upon accepting the award, Herrera quipped, “I wish I could come every year because I heard so many great things about me.”

Elsa Klensch noted how the designer has evolved since her first fashion show 20 years ago. “Carolina Herrera has surprised us all in those 20 years. More than any other woman designer, she has adapted to the immense changes in lifestyle,” she said.

Before sitting down to dinner with her daughter, Patricia Lansing, her husband, Reinaldo, and others, Herrera said, “I’m always surprised by awards, but I love it. This is a lovely club, and it’s always wonderful to get an award.”

The NAC’s president, Aldon James, said fashion has long been linked to the club. “We were the first public club to admit women in 1898. Fashion has always played a role here,” he said. “Oleg Cassini is one of our members and Pauline Trigère used to be one.”

As was Theodore Roosevelt, photographer Alfred Stieglitz, painter Robert Henri and sculptor Anna Hyatt Huntington, but Tuesday night belonged to Herrera. James rattled off a host of reasons why Herrera got the nod this year, following in the footsteps of last year’s recipient, the late Geoffrey Beene.

“She has an exciting company that has accessories, bridal, the cologne — it’s a fashion powerhouse. She’s not into trends. We feel her fashion will endure,” he said. “She also has reverence for awards and that was a warm affirmation. She is very respectful of people wanting to honor her.”

If that weren’t enough, James added, “She’s adopted our city even though she’s from Venezuela. That’s an exciting dimension.”