For Carolina Herrera, the honor of being named Mother of the Year by the American Cancer Society is about family -- and more. 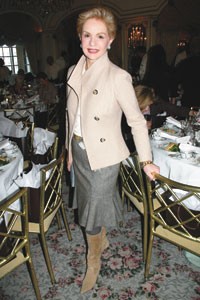 NEW YORK — For Carolina Herrera, the honor of being named Mother of the Year by the American Cancer Society is about family — and more.

“I am doubly proud of this,” she said before receiving the award during a luncheon Wednesday at the St. Regis Hotel here. “First, because the group that is giving it to me helps save so many lives and, second, because I am very proud to be a mother and a grandmother and, hopefully someday, a great- grandmother. My grandson is getting married, so maybe I will be a great-grandmother in two years.”

The perfectly coiffed designer certainly isn’t the stereotypical great-grandmother. Guests such as Dennis Basso, Jamee Gregory, Alejandra Cicognani, Somers Farkas and Mary McFadden, as well as event co-chairs Muffie Potter Aston and Aileen Mehle, would no doubt agree. Asked the secret to being a good mother, Herrera, who has four daughters, said: “You have to be just, disciplined, listen to your children and you don’t have to say, ‘They’re a best friend.’ I’m their mother first and they have best friends. But you have to explain why you say, ‘No.'”

As if on cue, Herrera’s daughter, Patricia, who was out of earshot of the guide-to-motherhood remarks, explained why she thinks Herrera is a good mother. “She doesn’t want to be your best friend and she trusts my judgment. She is so subtle about the things she strongly believes you shouldn’t do, but she does it in a way that you wind up going her way without a fight.”

Upon seeing her immaculately dressed daughter at the luncheon, Herrera stopped herself in midsentence and said, “You look so very, very chic, baby.”

The younger Herrera has seen her mother balance work and family on a daily basis because she is a designer at Herrera’s company. As for her mother’s advice about motherhood, her daughter said: “She told me to try to make everything as easy as possible.”

The American Cancer Society said it selected Herrera for her “unwavering commitment and devotion to her four daughters, Mercedes, Ana Luisa, Carolina and Patricia, despite her hectic schedule and often unglamorous days.”

With a signature fashion collection, a bridal collection, fragrances, accessories and 15 freestanding stores, the designer has more than her share to juggle. But her husband, Reinaldo, said she knows when to wear each hat. “She divides her time into the compartments she considers important at any given time: designer, wife, mother or friend,” he said. “But in terms of priority, she’s a mother first, and then everything else.”