Hien Le took his minimalist aesthetic courtside, channeling the colors and smart elegance of the game of tennis into a sporty chic spring collection. 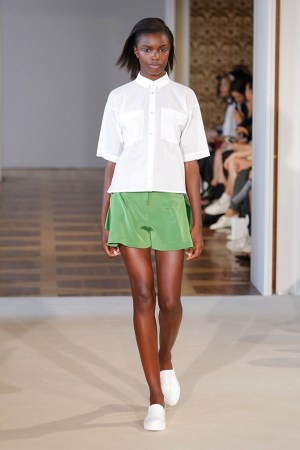 Berlin’s graceful minimalist Hien Le went sporty chic — in his own way — for spring 2016. His Mercedes-Benz Fashion Week Berlin runway show for men and women delivered tennis whites along with greens and dusty peaches, the latter hues inspired by the court sport’s clay and grass, with dusty blue, olive and sage thrown in for good measure.

Though timed to Wimbledon, the inspiration was the smart elegance of retro tennis togs, as well as California in the Sixties and Seventies. Pleats played strong in white and pine green skirts and dresses. Intricate yet breezy kerchief shirts kept things cool, and coated linen enlivened short jackets and trenches. Solid shades dominated with one exception — a mere whisper of a repeating pattern of tiny paired rackets in green-on-white on a double-layered wrap skirt, covered with sheer white layers of gauzy Swiss cotton for an apron effect, a Le signature.

The summery pieces for men and women complemented each other, such as his-and-hers sheer shirts with carefully placed front pockets for the ladies, as well as a sporty tennis dress in vivid green Japanese cellulose and crisp white cabana sets for the guys in silk and summer wool.