Think global. That was the sentiment at last week's graduation ceremony for the Academy of Art University's School of Fashion.

By Monica Schweiger on May 31, 2006
View Slideshow 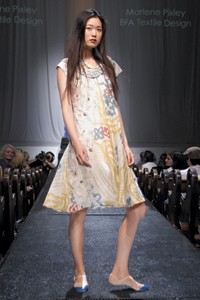 SAN FRANCISCO — Think global. That was the sentiment at last week’s graduation ceremony for the Academy of Art University’s School of Fashion. There were guests from around the world, including designer Alexander McQueen and Macy’s West chief executive officer Robert L. Mettler, both of whom received honorary degrees from the college. Other honorary degrees were conferred on Christophe Girard, deputy mayor of Paris and director of fashion strategy for LVMH Moët Louis Vuitton, and retailer Wilkes Bashford.

Student works, presented on a runway, featured a refreshing range of looks, from the whimsical textile designs of Marlene Pixley to Kyung Sun Han’s expertly tailored somber tuxedos. After the presentation, McQueen unexpectedly announced that he was awarding an internship to graduate Ji Won Ree on the merit of her intricate and modern Art Deco-inspired pieces. “Her engineering and graphics in knitwear were so obviously McQueen,” the designer said. And fellow graduate Yan Li Zhu of China, who showed a funnel-neck kimono-sleeve sweater dress, will also be traveling to Paris this summer for an internship with Louis Vuitton under the guidance of Marc Jacobs.

This story first appeared in the May 31, 2006 issue of WWD. Subscribe Today.