The Paris spring collections got under way with some designers playing with abstract ideas, and the results ranged from frilled, camouflage Victoriana to deconstructed Ts. 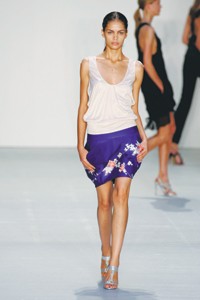 The Paris spring collections got under way with some designers playing with abstract ideas, and the results ranged from frilled, camouflage Victoriana to deconstructed Ts. The best looks, however, were rooted in reality: short, swingy dresses and asymmetric jackets.

Yohji Yamamoto: Is Yohji Yamamoto goading his audience? The collection he showed on Sunday night made for something of a conundrum. His typically inventive cuts just weren’t enough, yet were way too much in a relentless display of statement sobriety that bordered on fashion hubris. What was the point? Certainly few women would choose to walk around like glitter-eyed Charlie Chaplins in baggy pants and overgrown shirts with starched appendages seemingly ready to slap their faces. Ditto in cumbersome clothes coiled in cords of garden-hose girth, or witchy wear finished with triangular-plated dragon tails. And what insight did the heavy, frilled camouflage motif bring to the war discussion? It really was all as odd and irritating as it sounds.

Yamamoto is one of fashion’s great creators: artist, intellect and technician in one remarkable package. Perhaps with the major commercial push Adidas is giving Y-3, he wants to go ever more high-minded on his own. But some of us just aren’t bright enough to get it.

Paco Rabanne: It’s been a year of change and a season of soul-searching at Paco Rabanne. The house had all but faded from fashion consciousness before Patrick Robinson stepped in to re-create this sleeper for today — not an easy mandate. While Robinson’s debut brought a hard-edged femininity to the fore, this time he sought to make a more ambitious statement, while at the same time acknowledging the house’s past.

His look, a sharp futurism softened with the occasional spray of cherry blossoms or chrysanthemum blooms, radiated promise rather than complete resolution. What it had in full were elaborate cuts and ample details. Short, swingy dresses, some swagged with looping net gauze, were appealingly girlish with a hint of space-age sparkle. A pouf of a miniskirt folded into itself like an origami party favor. Tacked panels hitched together to make an apron-dress decorated with Japanese flowers. There were flyaway flaps, intricate folds and feathered tabs on military jackets.

A lot of work went into these clothes, and if it was sometimes too much, at least Robinson has brought to the house an energy and currency that had been long been missing. Now, it’s his task to streamline and perfect his message.

It was a welcome change that none of the above-mentioned nubby knits appeared in the show. Instead, the spotlight shone on a parade of jackets, which the designer’s fans tend to crave. These were cut flatteringly high on the shoulder and in varying combinations of materials: matte washed leather, a glossy patent, pleated organza, stingray, canvas, silk and more. Simpler versions were pretty, while those with flying flaps and bias slashes held together with knotted ties were hit and miss. Ditto the new offering of crisp, sheer organza sweatpants. And why does Owens continue to push those model-hobbling, long skirts that have scant retail or editorial value?

Undercover: Near the end of Jun Takahashi’s Undercover show, he sent out the perfect metaphor for his repetitive repertoire of deconstructed concert T-shirts: a black T-shirt embellished with shiny grooved hunks of broken record. It made you wonder if the endless, sleep-inducing parade was intended.

That said, the designer is far from being a crafty teenager slicing and dicing Dad’s old Cheap Trick and Grateful Dead Ts in his bedroom. His was an artful rendering that turned necklines into jacket pockets or flipped them around on sleeves as holes for elbows to poke out from. Models turned out as cool rock and hippie goddesses — some with loose straight hair crowned with thin chains, others with what appeared to be Pharoah-like headpieces wrapped in T-shirts — wove their way through a spooky, Goth circle of half-melted candles. Departures from this norm went one of two ways: conceptual or commercial. The former was best seen in a hooded cape crafted of printed felt circles with a shearing lining; the latter came in a surprisingly straightforward finale of printed T-shirts with necklines as necklines, layered over jackets and slim pants. Still, one left the show with a feeling of relative disappointment as the talented Takahashi usually has a few more tricks up his sleeve.

Bless: Designers Desiree Heiss and Ines Kaag sent their “real people” models ambling round and round among the benches set up in their verdant venue: a plant market. The slightly confused presentation featured tweaked — occasionally very tweaked — takes on sporty weekend staples of the T-shirts-and-jeans variety. Stiff nylon mesh pockets filled with the usual pocket fare of Euro notes and coins, gum and cigarettes hung off sweatshirt sleeves. Elsewhere, sliced fringe on T-shirts was attached to dreadlocks forming curtains over some unfortunate models’ faces. Nevertheless, the conceptual duo’s work is interesting and witty, if a bit weird.