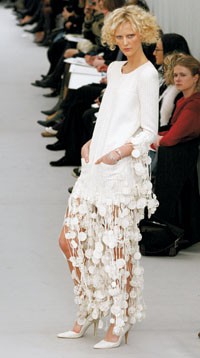 In the beautiful collection he showed on Tuesday morning, Lagerfeld worked a dichotomy motif, one he proclaimed with glee in his program notes: “The Duality of Contrasts.” Lest one miss the point, he spelled it out, citing an “unsporty blouson,” the “direct opposition” of a lean jacket and ruffled dress and, most grandly, “the hypocrisy of a severe jacket giving way to the frivolity of a tiered, ruffled skirt.”

If the h-word sounds a bit judgmental for the play of wool and feathers, well, Karl has never been one for conversational understatement. He speaks to incite. But he designs to charm, to flatter and to offer women the promise of looking beautiful — the surest way to lure them to the stores, and twice a year, to the haute atelier. Sure, Lagerfeld knows all about fashion provocation and irony; he’s been around those blocks plenty and still drops by on occasion. But he also knows when to say when. His runway always offers the promise of the grand flourish without the certainty. Coming within the context of something else, its arrival creates the excitement it deserves.

Lagerfeld started with contrast of the obvious sort, the house signature black and white. First look out: a black suit woven with thick strips of black. He then took that spectator play round the clock: a narrow black dress with discreet hem fringe and buoyant tulle clouds on the sleeves; a breathtaking confection of a jacket in tulle and lace beribboned in pink streamers over a plain black column. Enter another of Lagerfeld’s dualities — that between severity and froth. Here, stark, elongated jackets gave way to skirts in tiered flounces or fringe. Conversely, billowing blouses floated over lean, unfettered skirts. When Karl wandered from his positive-negative theme, it was with a glorious pale palette of neutrals or romantic pastels; only a harsh-hued yellow dress and a somewhat suburban — mon Dieu! — bright blue suit looked out of place.

Throughout, exquisite embellishment — beaded silk fringe, lavish embroideries and layer upon layer of ethereal tulle — flirted with drama without erupting into full-throttle theatrics. In the pervading spirit of contrast, control ruled even when Lagerfeld put on the glitz from Chanel fine jewelry: A major diamond necklace dazzled a black day suit; multiple rings went with an austere black jacket and frilled skirt. Accessories, too, were kept in check. At a time when it seems that the entire shoe world is engaging in an increasingly gaudy (albeit delightful) roulette of ornamental one-upmanship, Lagerfeld chose to show almost everything with simple pumps in black or beige.

Of course, another kind of dichotomy plays out in the couture season after season: that between full-on fantasy and idealized reality, two distinct points of view, each with its own potential glory. Once again, Lagerfeld made a near-perfect case for the latter with exquisite clarity, glamour and grace.