High Five: The Latest From Chloe Sevigny for Opening Ceremony

Chloe Sevigny and Opening Ceremony unveiled the latest fruits of their union, pre-spring, Tuesday at a party in the Elizabeth Street Gallery’s garden. 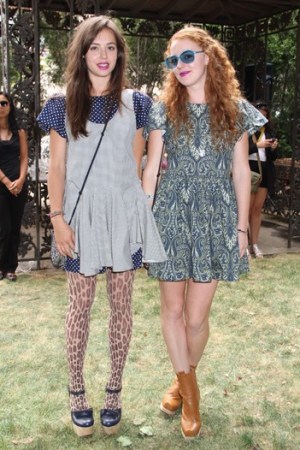 Chloë Sevigny and Opening Ceremony unveiled the latest fruits of their union, pre-spring, Tuesday at a party in the Elizabeth Street Gallery’s garden. The concept: five dresses in five patterns. Styles included an Empire-waist shift, a baby doll, a Peter Pan collar number, a puff-sleeve look and a boxier cut, as well as leather shorts and jeans.

Now in its third season, Sevigny and Opening Ceremony’s popular partnership is increasingly made up of mini-collaborations within the collaboration. First, Sevigny’s fashionable friends, including Jen Brill and Lissy Trullie, were put to work as models. Then there were T-shirts done in conjunction with the Robert Mapplethorpe Foundation; square-toe boots reissued by NaNa Shoes, one of Sevigny’s favorite brands from the Nineties; sunglasses by Barton Perreira, and custom-printed tights by Fogal to match the dresses — leopard, polka dot, paisley, houndstooth and floral. “These are prints that I always come back to,” said Sevigny. “It’s kind of a selfish collection, really.”