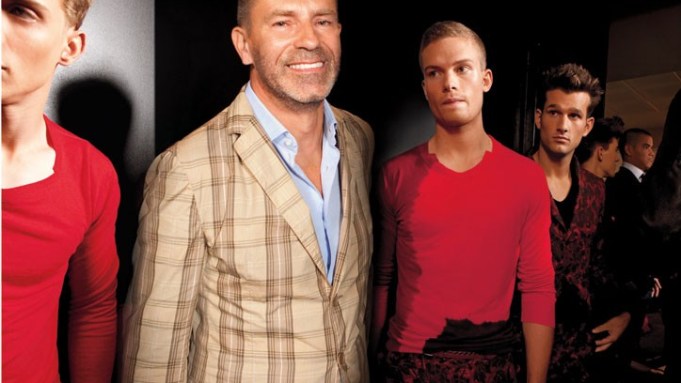 Bottega Veneta was a struggling, off-the-radar leather goods brand known for its woven leather handbags when Gucci Group bought it in 2001 and tapped Tomas Maier as creative director. The German-born designer, who had spent nine years at Hermès, was an unlikely savior for a company steeped in Italian tradition. But the tenets he set down—no logos and no compromises—redefined Bottega Veneta in an era of luxury branding run amok. In 2004, the company introduced men’s wear and quickly established its signature look: refined, realistic and steadily evolving, never trendy. This season, Bottega Veneta showed at its new Milan headquarters, a monument to Gucci Group’s now second-largest brand, which recorded 2008 revenues of 402 million euros, or $591.5 million at average exchange, or 11.9 percent of the Group’s tally. The bold and balanced collection was invigorated by reds, purples and greens. Patterned cotton suits, dégradé knitwear, leather bombers and artisanal accessories all epitomized casual elegance. Neapolitan-tailored jackets were paired with trousers that tapered into a narrow cuff, some cinched with an elastic to show off glossy loafers. While there were also strong-shouldered suits, and even a few double-breasted tuxedo jackets, an endless-weekend vibe prevailed. The ultimate accessory? A Cabat bag rendered in tie-dyed, tobacco colored intrecciato.

WWD: You had perhaps the definitive collection of the season. What do you think you tapped into? Why does that collection feel so right for this moment?
Tomas Maier: I was hoping to capture a sense of possibility. There’s a certain restlessness in the air right now, a feeling that it’s time to stop waiting and seize the moment, whatever it brings.

WWD: This collection is rich with color. Can you describe the process of selecting and developing those colors?
T.M.: Color is always the start of the design process for me. For this collection, I began with a single, fiery red and built the palette from there.

WWD: The collection has both very soft and very structured blazers this season. What was your thinking behind that?
T.M.: The blazer is like the center of gravity in a man’s wardrobe—everything else revolves around it. Something so central should exist in many variations.

WWD: What were you thinking about the tight patterns and the tie-dye?
T.M.: I like the energy of the prints, the kinetic feel of overdyeing and tie-dye. I was also interested in exploring color as it relates to silhouette—that is, using color to break the line of the clothes.

WWD: Can you share some rules of style for men?
T.M.: I’m not big on rules. My one piece of advice is to buy the very best quality that you can afford.

WWD: How does a man manage to be stylish without being fashionable or trendy?
T.M.: If you have your own personal style, you won’t look trendy. Restraint and individuality mark the difference between stylish and fashionable.

WWD: Is it related to the line between masculine and feminine?
T.M.: In the recent past, fashion was perhaps considered “feminine,” but I think that’s changing. Men are more confident in how they dress and they want a wider range of styles to choose from.

WWD: What is the effect of designing two collections, Bottega Veneta and Tomas Maier? How do you compartmentalize the two?
T.M.: The Tomas Maier brand is smaller in volume and scope. In terms of design, it’s very easy to separate them because the two brands are so different. Bottega Veneta is a complete luxury lifestyle brand, while Tomas Maier offers casual luxury for time off.

WWD: You previously worked at Guy Laroche, Sonia Rykiel and Hermès. What lessons, values or habits did you pick up from them and carry on today?
T.M.: I learned a great deal at all three jobs, particularly about the importance of quality and functionality. Also, all three brands are attuned to their customers rather than to the trends. Watching that work was a valuable lesson for me.

WWD: Which other designers do you most admire?
T.M.: For women’s fashion, I’ve always admired the designs of Coco Chanel, Yves Saint Laurent and Cristóbal Balenciaga. For men’s wear, where it’s more about technique, I’m a big fan of the Neapolitan tradition of tailoring.

WWD: Which designers excited you when you were very young?
T.M.: Yves Saint Laurent.

WWD: What was your first high-fashion purchase?
T.M.: A Gucci belt in the early Seventies.

WWD: We know you shun trends. What about other fashion references? Are there any people or periods that consistently influence you?
T.M.: I often look at work clothes—pieces designed for a specifictask. There are also traditions I return to, such as the British brogue shoe and the Neapolitan shoulder.

WWD: Bottega has prices in the highest tier of fashion. Has the economy had an effect on the way price and value are perceived?
T.M.: Perceptions of value have changed a lot. People are increasingly interested in quality and timelessness, which is good for Bottega Veneta.

WWD: The poor economy has made some of the hype around fashion quiet down. Is this good for Bottega, too?
T.M.: I think that the closer people look, the better Bottega Veneta looks. We are a brand with much to gain from a more focused shopping experience.

WWD: Would you ever do a secondary line? Perhaps for the younger brother of the Bottega customer?
T.M.: Philosophically, it doesn’t make sense for Bottega Veneta to have a secondary line. The brand is defined by standards of quality and craftsmanship that couldn’t be maintained in a secondary line.

WWD: You have had collections that were very much about work—both rugged workwear and tailored suits. But this collection feels entirely leisurely.
T.M.: The attitude in this collection is more playful than some in the past, but I think the clothes are appropriate for work. The conventions of work dress are changing.

WWD: What do you do in your leisure time?
T.M.: I like to read, to work in my garden and to entertain friends at home.

WWD: The collection has many elements of activewear. What kind of exercise do you enjoy?
T.M.: Running, hiking and swimming.

WWD: Bottega also seems to have a strong travel sensibility.
T.M.: Yes, our customers travel all the time. They want clothes and objects that work for their lifestyle.

WWD: To what extent do you design for yourself?
T.M.: I couldn’t design something that I didn’t like, but my personal style is distinct from that of Bottega Veneta.

WWD: It has always been written that Bottega Veneta has no logos. But the intrecciato is recognized around the world. Isn’t that a kind of branding?
T.M.: It’s a kind of signature, yes, based on an artisanal technique. But the effect is subtler and more intrinsic to the product than a logo would be.

WWD: Bottega Veneta means “Venetian boutique.” Is Venice still an inspiration?
T.M.: Actually, the name refers to the Veneto region, of which Venice is the capital. It’s a region with extraordinary traditions—of leather crafting, architecture, glassmaking—and it’s very much a part of Bottega Veneta’s identity.

WWD: What do you think you would have been if you weren’t a designer?
T.M.: I’d have been an architect.