MONTREAL — Retailers shopping the 23rd annual North American Fur and Fashion Exhibition here May 8-11 at Place Bonaventure said they were enthusiastic about the upcoming season. 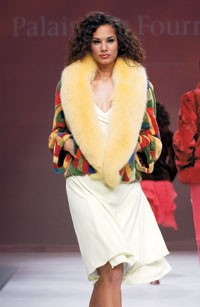 MONTREAL — Retailers shopping the 23rd annual North American Fur and Fashion Exhibition here May 8-11 at Place Bonaventure said they were enthusiastic about the upcoming season.

The 200,000-square-foot exhibition hall was sold out, as 200 exhibitors were kept busy writing an estimated $1 million worth of orders from about 4,000 buyers from around the world. And overall demand for fur products continues to increase, with retail fur sales in the U.S. last year at $1.8 billion, up 7.5 percent compared with 2003. Canadian fur exports, 80 percent destined for the U.S., totaled $288.8 million in 2004, an 8 percent increase from the previous year. Total fur exports have increased by one-third in the past five years, according to the Fur Council of Canada.

Exports of raw furs to the U.S. accounted for $185.7 million of total exports, followed by $73.1 million in fur garments and $30 million in dressed furs. All figures have been converted from Canadian dollars at the current exchange rate.

Flemington Fur Co., of Flemington, N.J., had a “terrific season” with a 20 percent increase in sales, said owner Bob Benjamin. “We buy year-round, and our inventory is clean. Fur is very hot and this winter worked well for us with coat sales coming on strong as winter approached.”

With a 40,000-square-foot store, possibly the largest fur retailer in North America, Benjamin carries a “tremendous amount of inventory,” which he shops for all over the world, in addition to manufacturing mink coats. The Montreal show accounts for about 25 percent of his purchases, where he bought a lot of sheared beaver and shearling.

One fur retailer who didn’t enjoy a good year was Paul Dittrich of Dittrich Furs, in Detroit.

“We thought it would be a good year and bought heavy last year. But with the GM and Ford layoffs, our sales were down 18 percent,” he said. “I had over 300 garments in storage that never saw the shop floor. As a result, my open-to-buy is reduced by 45 percent.”

Stuck with heavy inventory, Dittrich was selective in his buying at the show. He left paper with Furko Canada for reversible beaver and suede jackets.

“I’ve noticed an increase in jacket sales this season, but we still seem to do better with long furs compared to sheared mink or beaver,” he said.

Business at Lazare’s Furs across the Detroit River in Windsor, Ontario, was better, although it, too, was down, said owner Paul Twigg.

“We’ve had better years, but we still sold a lot of merchandise. Our number-one seller was mink, followed by sheared beaver,” Twigg said. “Our sales were off by about 10 percent, due mainly to our store in Detroit. In fact, the whole southeast of Michigan took a hit this year.”

Despite the drop in sales, Twigg’s inventory was “fairly clear” because he manages it on a regular basis. “If something’s not moving, we’ll take a hit (cut prices) by clearing it out. My open-to-buys were good, because we watched ourselves last year and didn’t overstock.”

Twigg bought from Natural Furs and Global Furs, his major private label supplier and also purchased accessories from Mitchie’s Matchings and Luna Fur. In addition to his own business, Twigg is president of the Retail Fur Council of Canada and said none of his members had a bad season.

“People who are reinvesting in their businesses and buying more creatively to reach younger consumers are doing well,” he said. “The service end of the business — like remodeling — is really doing well.”

Exhibitors felt traffic at the show was the same or slightly better than last year.

“We wrote orders the first day, which is unusual,” said Mike Constantopoulos of Palais de Fourrures, a local mink coat manufacturer. But Tommy Kotsovas of Zuki Furs here felt traffic was about the same as last year, with a lot of looking on Sunday before buyers wrote on Monday.

Angelo Tsangaropoulos of Mink Mart on Seventh Avenue in New York, thought traffic was heavier than in 2004.

“Last year, the first day was pretty quiet,” he said. “But the buyers who know us come early to beat the rush. A lot of our customers from the States come to the show but don’t come to New York.”

Aaron Lishman of knitted fur specialist Paula Lishman Furs of Blackstock, Ontario, felt traffic was the same as last year. “We expected more buyers, but it was better than most previous years.”

Traffic was up 5 to 7 percent over last year at Natural Furs, said owner Christina Nacos.

“We were working more consistently throughout the entire show,” she said. “Luxury items like Persian lamb, reversibles and long-haired were our strongest sellers.”

To exploit emerging opportunities around the world and to protect Canadian manufacturers from low-cost countries, the Fur Council of Canada announced it will spend about $1 million on a print and billboard campaign next fall. The “Beautifully Canadian” campaign and garment label will promote the superior quality of Canadian furs in the face of growing competition, said council executive vice president Alan Herscovici.

“Like the rest of the Canadian garment industry, we are facing a very serious challenge from low-cost producers. In response, we will play to our strengths — extraordinary craft skills and beautiful furs.”