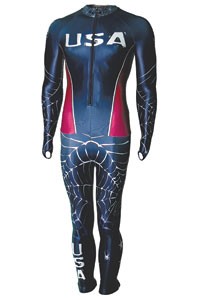 NEW YORK — The Winter Olympics in Turin are three weeks away, and activewear companies have prepared another raft of innovations to enable athletes to jump higher, ski faster and skate more smoothly.

Although ticket sales have so far been lackluster and the hype has just begun to accelerate, the Olympics are still the best international showcase for companies to flaunt their newest and best apparel innovations, which usually become available to consumers soon after the Games and can give a boost to sales.

“Our goal is to maximize athletic performance through advanced apparel technologies,” said Jordan Wand, global director of Nike’s Advanced Innovation Team, previewing new Olympic apparel innovations at the firm’s showroom here. “Our philosophy is that apparel is equipment, not an accessory.”

The Winter Games have fewer athletic competitions than the Summer edition — there are 15 events in Turin compared with 28 at Athens in 2004 — but contain some of the most-beloved Olympic sports, such as figure skating and downhill skiing, as well as newer Olympic sports including women’s ice hockey, snowboarding and skeleton, where individual athletes rush headfirst down an icy track at high speed. The Games kick off on Feb. 10 and run through Feb. 26, and will be broadcast in the U.S. on NBC and its affiliated networks with more than 400 hours of coverage.

Roots Canada has big expectations for the Games this year. Roots, like Nike an official apparel sponsor, provides the outfits that all American athletes will wear in the opening and closing ceremonies and also makes “villagewear,” which is cobranded casualwear given to all U.S. athletes for lounging around. The company has developed retro-inspired looks this year that are also available for consumers at Roots stores, and has introduced an updated version of its popular beret from the 2002 Games in Salt Lake City.

In addition, for the first time Roots has signed a deal with Target for its Olympic merchandise to be sold at 1,400 stores and on the retailer’s Web site, giving Roots a much larger retail presence than it has had in the past.

“This is a major initiative for us to have this deal with Target,” said Michael Budman, co-founder of Roots. “The product just hit store floors and is already starting to sell. We are optimistic about sales for this collection, which is more fashion forward this year.”

Budman noted the company is still selling its 2002 berets at stores in Salt Lake City.

Chester Wheeler, director of corporate sales and licensing for the United States Olympic Committee, said he was optimistic about sales for products bearing the Olympics logo, and said he thinks the sales at Target could help push sales of the cobranded Roots apparel over $1 million. In addition to Nike and Roots, the USOC has licensing partners that will sell official U.S. Olympic merchandise in categories ranging from jewelry to key chains to home and office products.

Most Olympic-themed merchandise is just beginning to hit stores in the U.S., and since the Olympics are in a European city, some market watchers have speculated that sales of U.S. Olympic merchandise this year will be less than they were at Salt Lake City when sales were reportedly close to $9 million. Nonetheless, Wheeler said the USOC is confident that consumers will snap up merchandise once the Olympics start.

“These Games are just getting hot,” Wheeler noted. “And the products we have this year from Nike and Roots are the best we have had.”

Many of the apparel innovations being unveiled in Turin were developed through the use of high-tech body mapping and intense study of muscle groups and how they function. Companies such as Nike, Adidas and Burton worked closely with their sponsored athletes to get firsthand input and ensure they are designing garments that can withstand elite competition. Adidas, for example, spent five years developing its Techfit suit to be worn by the U.S. cross-country ski team. It resembles a Spider-Man outfit, with special rubber bands applying pressure in certain areas of the body. Spyder is using a new porous synthetic, padded polymer material for its outfits for the U.S. alpine ski team.

Burton Snowboards has developed jackets for the snowboarders that come equipped with wireless technology from Motorola that lets riders pick up phone calls and control an iPod using a control panel on the jacket’s sleeve.

Nike will have a huge presence at the Games, and it is sponsoring numerous federations and teams from countries around the world. For the U.S., it is outfitting the men’s and women’s hockey teams, as well as the speed-skating teams and athletes including skier Resi Stiegler, hockey player Angela Ruggiero and snowboarder Lindsey Jacobellis. For Turin, Nike has a slew of technologies developed by the Advanced Innovation team, a 35-member division focused on improving athlete performance with high-tech gear developed in speed chambers.

Nike’s latest innovations incorporate the company’s Swift technology that was introduced in running apparel in the 2000 Sydney Summer Olympics. Nike’s new hockey jerseys, which will be worn by the women’s and men’s teams, have mesh venting to keep athletes cool and allow air flow directly to the body, and are made of a lightweight fabric, Wand said. The Swift hockey sock is also more lightweight, and has a snugger and more streamlined fit that doesn’t require taping. Nike doesn’t reveal the exact materials behind its innovations since it’s proprietary technology.

In addition, the Nike Swift speed-skating uniforms for the first time are differentiated for the long- and short-track competition. The long-track suits are made of a new “high-stretch, high-recovery, high-breathability” fabric that is designed to reduce friction drag, Wand said. Past suits were made of a thicker rubber-coated material. The new outfits also have fewer seams in order to improve aerodynamics and comfort. The short-track suits incorporate cut-protection padding, a requirement for all Olympic skaters, into the suit. Prior to this, most skaters wore two garments — an outer suit and an inner cut-resistant suit.

Wand said the company keeps its innovations so top secret that athletes wearing Nike apparel don’t receive their outfits until just before the games. They recently received an all-black version to practice in so that Nike competitors won’t be able to crib any information.

Nike is also for the first time providing the podium uniforms that all U.S. athletes will wear when they accept medals, which include a three-in-one layering jacket with an outer layer of quilted down bearing Nike’s swoosh logo and the official Olympic logo.

As an official U.S. Olympic Committee sponsor, Nike also is providing “villagewear” for all U.S. athletes. It has taken over that sponsorship from Adidas and gives the brand more exposure at the Games. The deal also allows Nike to use the Olympic logo in other apparel and accessories for consumers, which include fitted T-shirts, jackets and sweatshirts featuring the Nike and Olympic logos. The apparel will be sold at Niketown and other stores, said a company spokesman.

While U.S. medal winners won’t be wearing Adidas, the German brand will have a major presence at the Games and is providing uniforms for federations from around the world in sports including luge, ski jumping, bobsledding, skeleton and biathlon. For the U.S., it is outfitting the cross-country ski team with the new Techfit suits made of Lycra that took more than five years to develop and were tested extensively, said James Lamont, the innovation team leader for Adidas. He said the suits support the athlete’s body by providing compression in certain areas and freedom of movement in others. The compression also supports leg muscles and reduces muscle vibration, thus reducing energy loss and muscle fatigue, he said. The fabric is designed to wick away moisture and transports sweat from the skin to the outer fabric face for quick evaporation to help keep athletes cool and dry.

Speedo is a new entrant to the Winter Olympics, and it is outfitting several athletes in bobsledding, luge and skeleton with its FS II Ice suits made of its proprietary Fastkskin fabric that mimics sharkskin. The fabric technologies were developed for Olympic swimmers in Athens, and adjusted for the outdoors. The suits look similar to some of those worn by the swimmers in that they are sleek fitting and are designed to reduce fiction, or “drag.”

“Drag is the enemy of both sliders and swimmers,” Craig Brommers, Speedo’s vice president of marketing, said. “The same properties apply.”

U.S. snowboarders might be considered the renegades on the slopes, but this year Burton took inspiration from vintage baseball uniforms for the team jackets and snowpants. The white jackets and pants have black-and-red pinstripes and come equipped with the wireless technology. Laurent Potdevin, Burton’s chief executive officer, said the Burlington, Vt.-based snowboard firm worked closely with its sponsored athletes to develop and refine the looks snowboarders will wear. Nonetheless, the Olympics are not a major endeavor for his company, he noted.

“Many of our athletes don’t even compete in the Olympics because it’s too mainstream,” he said. “And they don’t really like to all wear the same thing.”

Burton also for the first time is sponsoring the Chinese snowboarding team, he said.

Spyder, which outfits the U.S. alpine ski team in addition to other national ski teams, has added protective padding to its ski suits made of “d3o,” a fabric technology developed in the U.K. that is made of a synthetic polymer material that hardens on impact. Once pressure is lifted, the material softens, said Laura Wisner, Spyder’s marketing manager. She said d3o is “ideal” for the ski race apparel because traditional materials such as hard plastic inhibit an athlete’s range of motion. Spyder will begin offering this to consumers in the fall, she noted.

Fila is outfitting many of the Italian teams, including the alpine ski, snowboarding, luge and biathlon teams. A highlight is the “jet suit,” which is comprised of three layers. The first, outer layer is a polyester that has high elasticity, the second layer is made of foam and is designed to give padding and protection and the third layer, the closest to the body, is made of a polyester-Lycra blend that has no seams. Under its new ownership by American firm Sport Brands International, Fila has cut back on its sport sponsorship activities, but the Olympics remain a key marketing and sponsorship event for the firm.