Christian Lacroix is a happy man after a triumphant couture collection that cemented his stature as one of fashion's most gifted practitioners. 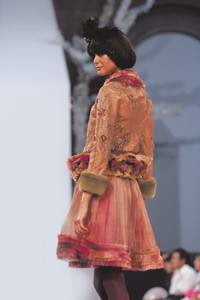 These are the clothes of a happy man, and Lacroix is certainly that after a triumphant couture collection last week that exhilarated his audience and cemented his stature as one of high fashion’s most gifted practitioners. The collection not only displayed almost two decades of couture finesse and savoir faire, but what Lacroix described as a “lighter hand and heart.”

“I love this collection. It was very smooth,” said the designer, who admits that he has sometimes been guilty of excesses. “Perhaps in the past we were too minimal, too maximal, too Baroque, even too Lacroix! Now, I don’t feel we need to be too loud.” Instead, Lacroix said he was driven to create “quintessential couture” and express what he called “freedom without extravagance.” He even extended the look into a plainer runway set and simpler hair and makeup.

Lacroix had recently completed costumes for a production of “Cyrano de Bergerac” at the Comedie Française here, and said he drew inspiration from the 17th-century Swedish and Danish costumes he researched for it. But he blended such references with the allure of the Sixties, which he considers the most modern of latter 20th-century decades, producing legendary style icons such as Babe Paley. While his impulse in the past might have been to complicate a grand faille dress with heavy brooches, he instead sketched a simple detail, wrapping a dark green ribbon around the bodice. And his favorite looks in the collection include some of the plainest draped columns — even if they are intricate marvels of construction.

Lacroix attributed part of his mood to what he considers the positive energy that has been brought to his house by new ownership. “I feel lighter and confident in the future,” he said, praising the Florida-based Falic family, which last year bought the firm from LVMH Möet Hennessy Louis Vuitton and is now spearheading a U.S.-led expansion. “It’s because of them we are looking forward again. They are so supportive, really.” To wit: All the couture workers were invited on Wednesday for a congratulatory lunch in the picturesque gardens off the Rue Faubourg Saint-Honoré salons, which have been welcoming a steady stream of devoted clients.

Although he declined to give figures, Falic Group chairman Simon Falic said, “We’ve seen very significant increases in couture sales since we bought the company,” and stressed that his firm, specialists in travel retail, has a “long-term plan” with Lacroix centered on reinforcing its haute image. And he noted that the designer, freed since last September of design duties at Emilio Pucci, is now able to channel all his creative energy into his own brand.

And that couldn’t please the designer more. Lacroix confessed he was “really sad” when he finished the collection, suggesting the immense joy he brought to the task. “Every morning I was so excited having new toiles and new fittings,” he said.

He still has plenty to keep him occupied, however, with a Lacroix store due to open in Las Vegas in August, an October ready-to-wear show to prepare for and a host of extracurricular projects. Besides doing the costumes for an upcoming performance of “Don Giovanni” in Innsbrook, Austria, Lacroix has also started work on designing the interiors for a second Paris hotel, this one on Rue de Bellechasse on the Left Bank. And he disclosed that the couture flock will be able to rediscover his scrumptious fall 2006 couture and countless other memorable confections before long: The Museum of Fashion and Textiles in Paris will mount a Lacroix exhibition in the fall of 2007 as the couturier marks 20 years of high fashion.