There’s a first for everything, and rarely is the product or execution perfect. Just ask Leonardo da Vinci, Henry Ford and the Wright brothers.

By Tianwei Zhang and Natalie Theodosi and Samantha Conti on June 14, 2020

LONDON — Here, WWD takes a look at some of the highlights of the three-day showcase, which wrapped Sunday evening, and suggests where there might be room for improvement.

• The platform the British Fashion Council built for the online showcase will be a great asset for designers and end consumers in particular. Going forward, it will continue to serve as a hub for designers’ digital content, with the BFC gradually adding more tools and components.

• Many designers who took part in the online schedule, including Matthew Miller and Christopher Raeburn, radiated optimism and offered up critical thinking about these turbulent times, tackling issues about the failing fashion cycle, racism, diversity and mental health issues.

• The Hill and Friends short film, awash in shades of pink — silly and full of optimism.

• Many designers embraced the opportunity to work outside the parameters of the traditional runway show schedule and worked on projects and products that suit them best, be it a deadstock capsule, a full spring 2021 lineup or even artistic collaborations that have nothing to do with clothes.

• The showcase proved that London’s designers are embracing many of the trends that will define the fashion industry post-COVID-19, including doubling down on unisex collections and taking design beyond the runway — and beyond clothes — with ‘zines, books, exhibitions and films.

• Even though there were very few new-season collections, key retailers still took part, including panel discussions hosted by Bergdorf Goodman’s Bruce Pask, a collaboration between Natasha Zinko and The Webster and the edit and installation of British brands by Galeries Lafayette Champs-Élysées. Other retailers, such as Farfetch and GR8 in Tokyo, were also big supporters of the showcase and were instrumental in spreading the London word to local markets and constituents. 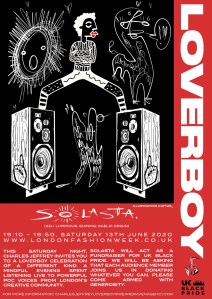 The invitation to Charles Jeffrey Loverboy’s online fundraiser for U.K. Black Pride, with an illustration by Ashton Attzs.

• Despite this being a free event and open to all, engagement was low. Instagram livestreams often drew just 100 to 200 viewers. When YouTube videos were private and only accessible by links, those viewer numbers went as low as 20. It means designers are not really benefiting much from the openness of the platform.

• Much of the content was repetitive. Everyone seems to be talking about the same topics — sustainability, the ailing fashion system, waste, the impact of COVID-19 on fashion — and the “in conversation” segments were often too long and audiences quickly got bored. There should have been more future-facing narratives and more challenging, agenda-setting conversations rather than designers talking about their process, and having solipsistic conversations with their mentors.

• There was a lack of curation, with too much content loaded onto the web site and no clear distinction between the on-schedule presentations and the pre-recorded, evergreen content. This made it difficult to navigate. Given the huge saturation of online content generally right now, it’s easy to imagine that a user — unless tuning in for professional purposes — would quickly give up and leave.

• The new platform featured the usual designers, BFC ambassadors and usual faces conducting interviews or in conversations. This was a great opportunity to involve a wider variety of London creatives and showcase new personalities and designers.