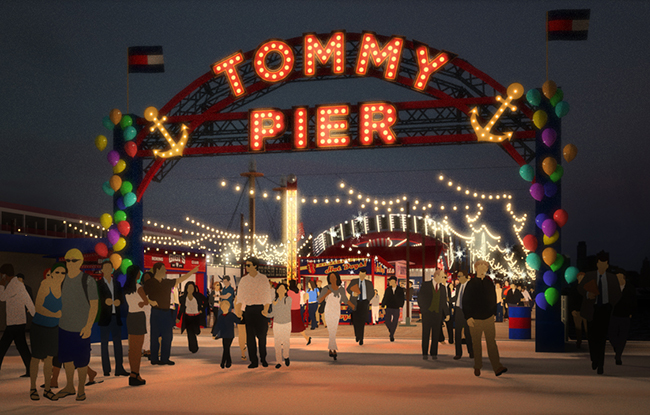 Tommy Hilfiger is going all out to win the consumer vote.

In a “see-now-buy-now” show that’s aimed equally at a consumer and an industry audience, Hilfiger will create “Tommy Pier,” at Pier 16 in South Street Seaport for his fashion show, which will take place outdoors on Sept. 9. Featured on the pier will be iconic fair rides and games, including a 40-foot Ferris wheel, classic fairground foods such as pretzels, hot dogs, hamburgers, ice cream sandwiches, cotton candy, lobster rolls, doughnuts and French fries. And fashion.

The designer will showcase the fall 2016 Tommy x Gigi Collection designed in collaboration with Gigi Hadid. A shoppable live-stream will take place on tommy.com at 7 p.m. EST, at the same time that the show goes live. Half of the show’s 2,000 guests on Friday night will be consumers. They will be invited via a combination of best customers through “Hilfiger Club” loyalty program from retail, registering for free tickets on NYC Go and through I Heart Radio starting at 8 a.m, E.S.T., on Aug. 29 and the brand working with select print media partners for e-mail outreach to sign up for free tickets. “Tommy Pier” will open again to consumers again on Sept. 10 from noon to 9 p.m. as the show is rebroadcast on large LED screens throughout the venue. Two Tommy x Gigi pop-up shops, a vintage Tommy Hilfiger shop, record shop, nail art and temporary tattoos will be housed along on the pier.

Twenty-one-year-old Hadid and Hilfiger teamed to launch her first collaborative collection with the designer last December. Putting her West Coast stamp on Hilfiger’s East Coast classics,  the company describes the partnership as a “new take on nautical with a playful, romantic edge.” There are marine, utility and maritime influences mixed with embroideries, sailor stripes and sporty details. Key fabrics include feminine chiffon, cozy cable-knits and sleek leathers.

Hadid caused a media stir when she walked down Hilfiger’s Mustique-inspired runway in a crochet bikini last September. She was then named the label’s global brand ambassador, beginning in fall 2016. In addition to walking the runway and collaborating on a capsule collection, she will attend launch events in key markets. The collaboration aims to blend the model’s Millennial take on fashion with Hilfiger’s classic American heritage. Hadid’s wide social following, which includes more than 21.8 million followers on Instagram, is expected to help the Hilfiger brand to expand its global reach. After her appearance on last September’s runway, Hilfiger said, “We were the most viewed show on Snapchat, and we’ve been having so many requests for the crochet bikinis and everything else Gigi wore. She is the definition of today’s ‘Tommy Girl’ given her optimistic personality and effortless, confident style.”

Hilfiger has never been low key when it comes to his fashion presentations. In previous seasons, Hilfiger has transformed his show space into a football stadium with a Jumbotron capturing the models walking on the AstroTurf runway or a beachfront complete with sand. Last April, the company created a pop-up island during Milan’s furniture and design trade show, Salone del Mobile. The brand built a 3,229-square-foot island with sand, palm trees, lounge chairs and straw huts in the buzzing Tortona district on a roundabout traffic, where visitors could take a break during the city’s Design Week events. Hilfiger offered video games that simulate a jet-ski race and a photo booth. Last August, Hilfiger created a makeshift tennis court in the middle of Bryant Park to launch his collaboration with Rafael Nadal for underwear, tailored clothing and fragrance, TH Bold.

And who could forget when Hilfiger built a Cape Cod-styled shingled house complete with a dog house in the front yard, curtains on the windows, a weather vane perched on the roof, and a mailbox and outdoor furniture, and dropped it down on the Meatpacking District? Inside was the Prep World collection featuring 60 pieces of women and men’s sportswear, as well as tennis racquets, ping-pong paddles, badminton rackets, croquet sets, bamboo bicycles and surfboards — all for sale. The 800-square-foot beach cottage, which was open to the public, was set up in various cities around the globe for similar events.