LONDON — A diamond-encrusted Jacob the Jeweler watch sits at the top of the fantasy wish list of some British teenagers — and on the wrists of their fashion icons, David and Victoria Beckham.

In the last couple of years, wearing... 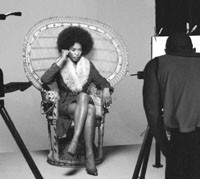 LONDON — A diamond-encrusted Jacob the Jeweler watch sits at the top of the fantasy wish list of some British teenagers — and on the wrists of their fashion icons, David and Victoria Beckham.

In the last couple of years, wearing ostentatious clothing and jewelry, also known as ‘bling-bling,’ has become the preferred style of dress for British youth. As hip-hop culture continues to trickle down to the streets of New York, across the Atlantic and into the British mainstream, the style is gaining momentum — and so are the sales.

In a stark contrast to the gloom facing other retailers, the popularity of diamonds in the U.K. is on the way up. Signet-owned jewelry chain stores Ernest Jones and H Samuel reported a 6.7 percent increase in same-store sales during the eight-week runup to Christmas, and upscale retailers are in on the action, too.

Last year, Freedom, the in-house jewelry line at Topshop, designed a giant pair of hoop earrings with “Bling” written through them, and they were an immediate sellout.

“The inspiration that has spurned the rise of ‘bling-bling’ jewelry amongst teenagers definitely stems from music, in particular the rise of hip-hop, R&B and pop music from the States,” said a spokeswoman for Freedom. “Bling-bling originated from hip-hop stars wearing their wealth for others to see and has gradually diffused down to the high-street market, as hip-hop music has become more mainstream and hip-hop stars like P. Diddy and Eminem have become known for their dress, as well as their music.”

As for apparel, New York-based Rocawear is starting to pick up steam. The brand is stocked in the U.K. exclusively at Selfridges department store. But before the launch here last September, it made big moves to get noticed.

The competition might not be as fierce yet, but as more hip-hop-inspired brands take interest in the European market, the competition is sure to grow. All over the world, teenagers covet the celebrity wardrobe and are drawn in by advertising featuring celebrities.

“I like charm bracelets like J.Lo had in the Louis Vuitton campaign,” said 15-year-old Sarah Jones. “If I see a celebrity I like in an advertisement, it’s much more appealing than a model.”

The Rocawear spokeswoman agreed that mainstream celebrities are endorsing the style.

“Popular fashion icons such as David Beckham wearing hip-hop fashions has broadened the style’s appeal in the U.K.,” she said. “Hip-hop has a natural ‘cool factor’ and people want to be associated with what’s cool, hence Rocawear’s success in America and now in the U.K.”

Ruby Warrington, style editor of Sneak, an Emap-published teen title, has seen an increase in readers inspired by U.S. rhythm and blues artists, and their British counterparts.

The magazine recently ran a J.Lo look-alike competition, where the reader with the most “J.Lo attitude” won a wardrobe of new outfits from her clothing label.

“They would love to be able to shop at Versace, D&G or Dior, but they settle for high-street stores like Topshop, Morgan, Kookai, New Look and Miss Selfridge,” Warrington said.

Fashion stylist Cynthia Lawrence-John, who works with British R&B acts Mis-Teeq and Sugababes, said, “Bling style is popular in the U.K. because it’s American and most British teenagers follow American styles slavishly, particularly hip-hop and R&B. Sugababes have eclectic taste and admire the style of Pink and Kelis, as well as drawing on their British street influences. However, Mis-Teeq is very much about the bling — labels, labels and more labels.”