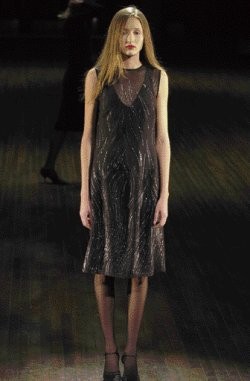 Of course, Branquinho, that shy thing, would be mortified by the fuss. But in her quiet, stealthy way, she slid right back into the slipstream with a collection of fresh looks that don’t dismiss the chic-clothes canon. Striking coats — including one in supersleek black, hooded and cut with a capelet over the shoulders — sent a tingle down the spine. Breathy tops, made of spliced tulle and satin, and pleated wrap skirts that swished along with a sliver of tulle peeking out were sweet without overdoing it.

No tricky stuff here. Still, Branquinho served up a little ginger: satin dresses with criscrossed rhinestone straps and satin and tulle, and another in black with sharp silver flames leaping up its front. After a few seasons of sitting in the shade, finally, Branquinho has turned up the heat.

Dries Van Noten: A Belgian by birth but a world traveler at heart, Dries Van Noten has, season after season, transported his audience to every corner of the earth. He has always been rooted in the ethnic school of fashion, favoring fanciful ideas from Asian exotica to Paris flea-market fare.

This season, however, Dries chose to stay closer to home, rummaging around the attic for some Forties inspirations. No war-bride numbers here, but rather the look of elegant disarray that Dries does so well, in a riotous explosion of prints, colors, textures. Just layer anything and everything — the bolder, the better. And the hits were aplenty: vintagey tweed coats in dusty colors; upholstery-patterned skirts and clashing jackets; brocade princess coats, some festooned with giant raccoon collars; delicate floral beaded shells and silver sequin tunics, worn under loose, kimono-sleeved jackets. But while the concept seemed hardly new — think Marni — it did provide lots of options and plenty of great clothes.

Lanvin: Sticking to a handful of themes and varying them in multiple incarnations can yield splendid results, as Alber Elbaz demonstrated with a striking and composed fall effort for the house of Lanvin. In this case, Elbaz chose the world of ribbons and bows, the penultimate feminine frill, and juxtaposed them with industrial-style zippers to produce a sporty, more updated edge. His exploration of old-world elegance-meets-modern chic came through equally strong in his mix of lace and satin with strict jersey and python with fur.

Although classic in its bent and full of terrific clothes that women can wear, the collection had nothing dowdy about it. Elbaz’s pleated black cocktail dresses were elegantly au courant and hit the season’s vibe for sophistication. In them, he fused strips of ribbon on lace so they fanned out as the models walked. That effect was equally fetching in knee-length skirts that, when puckering open, revealed a shot of intense aqua or yellow.

The bow motif served as decoration when the ornament was flattened out on the front or back of knee-length skirts and lovely narrow dresses or trousers. Meanwhile, Elbaz lent romance to the military theme by positioning zigzagging bows on an officer-style jacket, or by transforming the epaulets on a midnight blue trench into a stack of flat bows. Largely circumscribed in black, blue and brown, the collection got a burst of light from a red pleated dress, while a bevy of dresses in distressed silver sequins oozed sexy glamour. In the three seasons since his arrival, Elbaz has established a rich and luxurious vocabulary for Lanvin.

Givenchy: At Givenchy, Julien Macdonald, by all accounts a very nice guy, has opted not to take the high road, nor the low, but a middle-of-the-road stance. That’s what nice guys do. They accommodate. He tamed the overtly vampy look that has visited his past collections for the house, and offered more salable stuff instead, including plenty of leather-and-fur combo coats with high, standing collars. Knit banding pulled the sleeves in nice and tight —and leather skirts even tighter — while a smattering of silver zippers brought the look up to speed. It all looked neater than it has in the past — less gaudy. And yet, aside from the slick sequined tweed, something was not right.

The look was too much and still not enough. If Macdonald had gone further, he would have ventured into Versace territory, where the girls just want to have fun. And if he’d pumped up the chic quotient, it could have turned up somewhere neighboring Celine. A pair of black dresses trimmed in slithering bands of gold link hit it right, but much of the collection seesawed, never coming into balance. Macdonald has made a move in the right direction, but his diplomacy can only take the collection so far.

Ann Demeulemeester: If Annie Hall had her own rock band, then Ann Demeulemeester is the one she’d ring up before heading out on a world tour. No one can do the intellectual rock thing like Demeulemeester can, and for fall, she took a moody, slightly androgynous approach that proved it. She’s always favored black clothes, but this time her commitment was nearly complete, save a mere handful of pieces that weren’t quite as dark as midnight. But don’t get the wrong idea. Demeulemeester’s approach wasn’t weighed-down or dour.

In a fit of whimsy, she took scissors to that example of severe conformity, the basic black suit, then reconstructed everyman’s staple with careful origami. An extra-long dark blue vest topped a miniskirt crafted from an upside-down pair of men’s pants, the zipper fly serving as a slit. Oversized blazers and coats were paired with baggy cinched pants or worn with a miniskirt over leather leggings. Snappy wide men’s ties came into play throughout, as did laced-up combat boots. Demeulemeester’s motorcycle boots are all the rage among fashion editors this season, and she was smart to send out a quick follow-up.

Avril Lavigne, should she ever want to smarten up a bit, could take a lesson from this sophisticated look. Perfect for her next appearance at the Grammy’s: a cropped jacket and matching back-flap apron, worn together to create a trompe l’oeil tailcoat. Well, rock on, Ann.

Akris: “Ka-ching,” said the clothes. No hype, no pretense, no over-the-top antics here. What Albert Kriemler delivers instead is quiet, quality fashion that talks big at the cash register — a winning formula that attracted retail honchos such as Burt Tansky of Neiman Marcus, Bergdorf Goodman’s Ron Frasch and Saks Fifth Avenue’s top merchandising team to Akris’ modest showroom presentation over the weekend. And in June, the Swiss-based company will open a 5,000-square-foot flagship on Madison Avenue.

All this success has obviously inspired Kriemler to loosen up a bit, giving his fall collection a younger focus with just a whiff of the Sixties. That translated into miniskirted suede suits as well as sporty pieces — a red wool peacoat paired with a brown leather skirt, or a creamy bulky knit cardigan zipped up over a wool mini. Kriemler also picked up on this season’s fur obsession, using it to trim tiny fitted jackets, tossing a fur scarf over a simple sweater and pants, or shaping sheared mink into a high-collared jacket worn over skinny black wool pants.

The youth injection didn’t carry over into evening, however, where the designer stuck to more traditional, conservative fare. This is both good and bad — bad because it would have appealed to a less-mature audience, and good for those Akris devotees who like things just the way they are.