Back in 1950, when Valentino moved from Voghera, Italy to Paris to start his fashion career, he struggled to secure working papers. 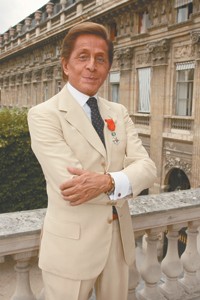 PARIS — Back in 1950, when Valentino moved from Voghera, Italy to Paris to start his fashion career, he struggled to secure working papers. But on Thursday the designer received France’s Legion d’Honneur. A few days before, Valentino mused about his journey between those two milestones. “The French have always been very nice with me,” he said, sitting in his office overlooking the Place Vendôme.

Dreaming of fashion in Voghera, the 17-year-old Valentino perfected his French at the local Berlitz center and convinced his parents to let him move to the French capital, where he took drawing and design courses at the Chambre Syndicale de la Couture Parisienne in 1950. “My parents were very courageous to let a boy of 17 go to France,” he says. “It’s like today if your child asked to go to Shanghai.” The gamble paid off. After nine months of training, he landed a job at Jean Dessès, where he worked for several years before defecting to Guy Laroche.

In those days, Valentino lived something of la vie boheme in two tiny, connected chambres de bonne on the top floor of a beautiful old building on Rue de Rennes. “One room was oval because it was under the domed roof, and I had a little view,” he recalls. “I did all my decoration at the marche aux puces, where I found a Napoleon III table. It was very charming.”

But Valentino didn’t indulge in Paris’ post-war nightlife. After putting in a day’s work at the couture house, Valentino would head to the movies. “I was crazy for the cinema,” he says. “When I was a kid, I had to chaperone my sister when she went out with her fiancé. I used to go to the cinema with them to see those beautiful stars, and this made me start to think about design and fashion.” Gene Tierney and Rita Hayworth were favorites. “Later on, of course, I met these people, but they were not as they were on the screen.”

Yet in those days Paris held just as much allure as Hollywood for the aspiring designer. “I felt at home in Paris, going around with the subway and buses, going to see exhibitions at the Grand Palais, the Petit Palais and the Louvre, and taking inspiration with me into the fashion world,” he says. “I felt it was my city.” He spent summers in Saint-Tropez, where he still takes in the sun for a few days every May.

But after eight years in Paris, Valentino set out for Rome, where he started his own house, with help from his father, who owned an electrical-supply store and who sold his country house to back the fledgling business. He showed his first collection in Florence in 1959, and his French training showed. “They used to call me ‘Francesino,’” Valentino says with a laugh. Little Frenchie.

The next year Giancarlo Giammetti signed on, and the business began to grow. Starting in a tiny apartment on the top floor of a palazzo on Via Gregoriana, the company eventually took over the entire building as its Rome headquarters. Meanwhile, stars flocked to the house, with Liz Taylor, Rita Hayworth and Audrey Hepburn leading the way. The world’s best-dressed socialites, including Marella Agnelli, Babe Paley and Jackie Kennedy, weren’t far behind. And after 1968, the year when Valentino showed his pivotal all-white collection and the year he designed Jackie Kennedy’s ivory georgette dress for her wedding to Aristotle Onassis, he became an international star.

In that same year, WWD ran a photo of Valentino dressed in a groovy haute hippie ensemble (by Yves Saint Laurent) topped off with a pair of granny glasses. It was an iconic photograph, showing that he’d cultivated a new personal look, taking on a polished, jetsetting sheen. And his fascination with an ultra-luxe lifestyle — houses, cars, yachts and a coterie of wealthy friends — also grew. So did his sales volume.

Valentino’s couture shows in Rome were must-see events, and in 1973 one buyer told WWD that, “Even if he would present his collection in Siberia I would go there.” When Valentino debuted his ready-to-wear collection several years later, he showed it in Paris instead, finally moving his couture shows there in 1989.

When he comes to France for the collections, Valentino stays in his celebrated country place near Versailles — Domaine de Wideville, a 17th-century chateau in the Louis XIII style that he bought 11 years ago. “One day I was walking on Madison Avenue in front of Sotheby’s, and I saw in the window a beautiful home,” he says. The multi-million dollar chateau was as good as sold. Yet it is only one of the many places — from London to New York to Gstaad — Valentino calls home. “I feel well anywhere and I feel at home everywhere,” he says. “If I had to say which one I love the most, I’d have to say London, because London is such a masculine city. But I love New York. The first time I went to New York was in 1962, and I know it better than my pocket.”

Rome, however, is a city Valentino doesn’t have a chance to enjoy. “Rome for me is about work, working on the collections morning through evening, collection after collection,” he says. Not that he minds putting in long hours at the atelier. “After so many collections, thank God I still have my enthusiasm,” he muses.

And after so many years, both his love of fashion and of Paris are still burning strong. “The atmosphere here is right for fashion,” Valentino sighs. “France has something magic.”