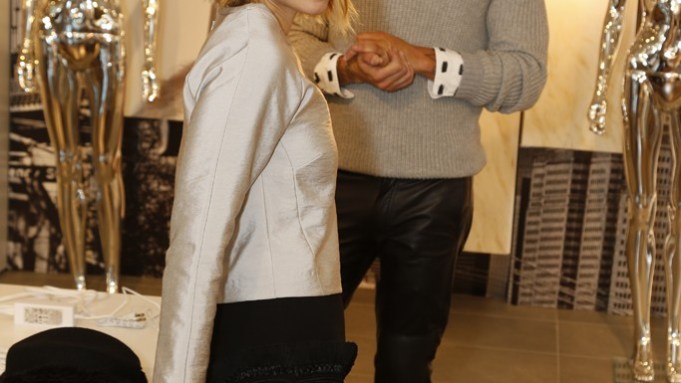 That’s Kate Mara, mulling a brown leather top with matching pants on a model at H&M’s Fifth Avenue showroom here. On Monday afternoon, the actress and her stylist sidekick, Johnny Wujek, were on site to work on a special New York Fashion Week project with the retail chain and Vogue, which evolves around the duo styling nine H&M windows to launch the New York Collections.

Mara and Wujek have been friends and fashion collaborators for almost a decade. They met on an editorial shoot around the time the actress was promoting “We Are Marshall.”

When H&M reached out to them to do this project, they jumped at the opportunity.

“Not only do we work together and get to play dress-up, but we are best friends, so it was a cool project to have been presented to us from H&M and Vogue,” said Wujek, who also styles the likes of Katy Perry and Kim Kardashian. “‘Mannequin,’ my movie fantasy, came true. I started conceiving all these ideas.”

With the fashion week tie-in, the theme of the windows is New York, which appealed particularly to Mara, a Bedford, N.Y., native who is now based in Los Angeles.

The windows will showcase fall looks from the elevated H&M Studio collection, which was unveiled with a fashion show during Paris Fashion Week in February.

“Not only has H&M stepped it up to the level where they are now showing in Paris during fashion week, but the collection also has a street vibe to it and they showed it with a futuristic set,” Wujek said. “We loved the idea of New York during fashion week and thought it will be cool to have a big print of the city, and lights, and life. New York is just life, you walk out the door and it’s go, go, go.”

“We are trying to reflect it,” Mara chimed in.

“The styling is the uptown girl, the downtown girl, the girl on the go who is chic but hustling,” Wujek added. “We wanted to incorporate so much, we wanted to have manholes with steam coming out.” They are also expected to feature yellow cabs, shattered glass on the floor and neon signs of their signatures.

On Monday, they were selecting the looks and going back and forth about how they should be presented in the windows. Though besties, the two don’t always see eye to eye when it comes to sartorial matters.

“I hate all bold pieces; anything with sparkles and faux fur,” Mara said. “And I love them,” Wujek retorted.

“So we compromise,” explained Mara. “Some of the pieces will be things I wouldn’t necessarily wear because not every girl is going to want to dress like I do.”

Mara wrapped filming of the new “Fantastic Four” movie last week, and while she takes fashion seriously, it’s not a primary focus at the moment.

Would she ever consider posing in the windows like Emmy, the mannequin portrayed by Kim Cattrall in the cult movie? “Oh no,” she said.

The windows will be unveiled on Sept. 4, when the collection goes on sale. On the same day, H&M on Fifth Avenue will host an event featuring a conversation between the two, with some 400 students expected in the audience. “We’ll also invite Kim Cattrall,” Wujek said.