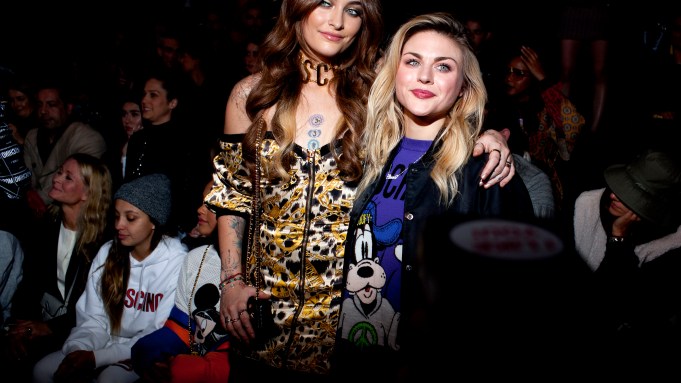 Jeremy Scott’s Moschino and H&M were a match made in media and fast-fashion heaven. It’s a wonder it took this long for the two to pair up. Held at Pier 36 in New York, the show’s theme was “Moschino [tv] H&M,” a double, maybe even triple, branding entendre winking at Moschino, old school MTV and media in general with a flashy blitz of screens and Times Square-style billboards. The casting was equally high-wattage, opening with Gigi Hadid, closing with Naomi Campbell, with the rest of the Hadid siblings, along with Joan Smalls, Teddy Quinlivan, Dilone, Isabeli Fontana and Winnie Harlow in between.

Scott didn’t squander a bit of the massive platform H&M grants. He played it for his disciples and the generation of fun-loving fashion fans who want their clothes to be multipurpose — they need to perform in person and on social media. He didn’t water it down. “You’re going to see an amalgamation of the most Jeremy Scott for Moschino collection you’ve ever seen before,” he said before the show. “I thought about it like I was creating a feast and I needed to pick all the right ingredients.”

His signature “cartoon couture” with Mickey Mouse and all the Disney characters was done up on baseball shirts and hoodies. Biker boys and girls wore leather perfectos, pants, skirts and a bustier dress all trimmed in gold hardware. There was denim, logo sweatsuits, bright puffer jackets, skirts and bra tops and a blinged out finale of puffers, overalls, hats and dresses fully encrusted in silver sequins and crystals. All of it was styled to the Nineties hip-hop-influenced nines with baseball hats; door-knocker earrings; chains upon chains upon chains; thigh-high combat boots, and construction work booties. Scott left his couture-level sight-gags — dry-cleaning eveningwear and car wash couture — on Moschino’s Milan runways. As full-throttle as the H&M collection was, it was all relatively wearable.

“I wanted it to be full on, and to take advantage of H&M’s abilities, which to make amazingly priced clothes that are still really well made and make it accessible globally,” Scott said. “That’s the most exciting element, that [the collection is in], I don’t even know how many stores all over the world in places that I nor Moschino have never even sold before.” He’s aware of the power and reach of a mass brand like H&M from collaboration with Adidas for Jeremy Scott. “This is the realm of how global I could hit with that,” he said. “I know from doing that that people want fun fashion. They want exciting things. They just can’t always wager their rent on it.”

Scott is a designer widely beloved by celebrities, and for the H&M collection guest list he tapped into nostalgia with famous childs-of including Frances Bean Cobain, Paris Jackson and Miles Richie; other VIP guests included Diplo (who DJ’d the after party), Aquaria and Kiersey Clemons.

“Jeremy has been one of my best friends for eight years now,” said Cobain, seated promptly before showtime, next to Diplo. “He’s one of my favorite human beings outside of all the hubbub of this, and I think he’s so brilliant and creative — I’ll show up for anything he does, really.”

The two first hit it off when the 26-year-old commissioned Scott to design a dress for her at Sundance a few years ago.

“I was like, ‘Hey, you should come’ and we bonded and really enjoyed each other’s company. He is one of the purest people I’ve ever met, and he’s also a creative force. When he comes up with something he does it to the fullest extent, and I respect that as an artist so much,” she said.

Cobain, whose current workload is made up of “art and music and life and being a good person,” professed to being a lover of a good fashion deal, though she’s more of a vintage shopper than a fast-fashion customer.

“I vintage shop all the time. I love Etsy, I love going to the bowels of Etsy and finding crap that no one has any idea how good they have it,” she said.

Aquaria chose an oversize hoodie, hat, thigh-high lace-up boots and not much else for her look.

“I’ve already been so blessed to have rocked a couple looks in the collection, from the look book campaign, so I wanted to wear something different,” she said. “I was really drawn to the old CD-ROM print; it’s a classic Moschino motif and I figured why not turn it out into a really funky look — lose the top, gain a super long pair of boots, and make it fierce and fashion.”

The winner of “RuPaul’s Drag Race” season 10 has been close with Scott for a while, since the two met “somewhere out in New York City.”

“He definitely loves to support the clubs and the fashion and the up-and-coming kids, so he’s always just been so welcoming to me and very supporting,” Aquaria said. “And especially with how crazy my past year has been, it’s been really affirming to have support from such [notable] people.”

Since winning the show and signing with IMG, Aquaria has her sights set on more fashion work.

“I definitely want to keep everything still rolling on this fashion kick; fashion has always my passion, for a really cheesy cliche,” she said. “I want to continue walking, working, styling and just expressing these designers’ original concepts but with my own Aquarian twists.”

Marc Jacobs came out to support Scott, a longtime friend, with fiancé Charly Defrancesco. Might he be taking inspiration from the evening for a similar concept with his own name attached?