Logo mania is back, courtesy of Wang’s collection for the retailer, which features everything from T-shirts to bath towels emblazoned with his moniker. 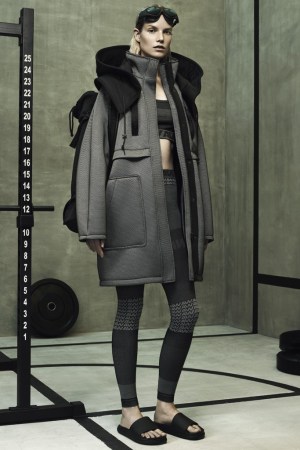 PARIS — Logo mania is back, courtesy of Alexander Wang’s collection for H&M, which features everything from T-shirts to bath towels emblazoned with his moniker.

The Swedish high-street retailer on Friday unveiled the full look book for the women’s and men’s line, scheduled to go on sale on Nov. 6 in 250 stores worldwide as well as online. It marks H&M’s first collaboration with a U.S. designer.

As previews indicated, an urban athletic vibe runs through the collection, which comes in a palette limited to black and gray, with the exception of a reflective silver down men’s jacket.

There are 38 items for women, ranging from socks priced $17.95 and bra tops at $34.95 — both with a prominently positioned “WANG” or “AW” logo — to parkas and jackets that will retail for up to $349, including a motorcycle jacket made of quilted black leather.

The collaboration represents Wang’s first full performance wear range, including quick-dry black running tops, perforated laser-cut shorts, tank tops, cropped tops and tights. Several of the tops are knitted in a pointelle pattern that, when worn, reveals messages, such as “This is an Alexander Wang cropped top.”

Performance details also appear in the more upscale pieces, which include a body-conscious scuba dress with interwoven layers and a cutout at the waist, retailing for $99, as well as black leather track pants at $349 and an openwork sweatshirt priced at $149.

“The result is a collection to be worn on the street, in the gym, at the club — the way women live their lives today,” H&M said.

The clothing items are complemented by a range of accessories, such as beanies, backpacks and sneakers, as well as unisex lifestyle objects including boxing gloves, a yoga mat, a whistle mounted on a ring and a magnetized Alexander Wang “trophy.” The most affordable item is a $9.95 key chain with an “AW” pendant.

The Alexander Wang collection represents a 180-degree turn from last year’s H&M collaboration with Isabel Marant, which featured richly embroidered jackets and fluttery printed chiffon dresses in her trademark boho-chic style. It comes as H&M is expanding the distribution of its beefed-up H&M Sport line in response to customer feedback. Its activewear offer, designed with input from members of the Swedish Olympic team, includes outfits for running, working out, yoga, tennis and outdoor activities.