A dazzling Versace show and a bohemian Christian Lacroix were highlights as the couture season rolled on. 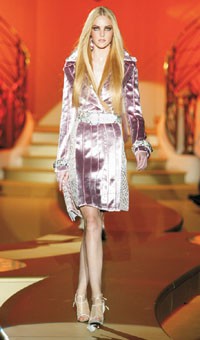 Atelier Versace: Donatella won’t travel to Los Angeles for the Oscars in February, as she’ll be busy with her ready-to-wear show in Milan the night before. But her breathtakingly bodacious dresses will surely make the trip, and are all but guaranteed to send Hollywood’s finest into a swoon. The swaggering, fine-tuned couture collection Versace presented on Monday night was a real razzle-dazzlefest, even by her own haute standards. “I call it hyper-glamour,” she said before the show. In fact, the only restraint Versace demonstrated was by sending out a bare minimum of daywear — two or three looks out of 23 — and even those seemed an unlikely choice for those living beyond the limelight.

As with Versace’s best efforts, this collection was born to strut and built to stun. Shimmying minidresses swagged with lengths of beaded fringe or wound with silver studded streamers were topped by wear-it-if-you-dare-to feather neckpieces. Glistening gowns came cut with spangled portholes riding over the hip or navel and dripping with “the biggest Swarovskis I could find,” Versace said, providing a blast of full-throttle glamour at its most brazen and beautiful. Of course, to complete the look, she sent each model out with perfectly-straight-to-the-waist Donatella hair.

While most dresses and gowns were done up in the classic Versace mode, news came via soft leathers and suedes cut to look like lace. An airy trellis of cut suede played peekaboo, running up the sides of a violet silk velvet coatdress lush enough to be made from sheared mink, while Versace’s grand ballgown boasted a bodice made from patent leather lace.

The trick was that Versace pulled it off without resorting to tough chic, with even the most revealing looks tending more toward elaborate delicacy. The Versace atelier has been doing its R&D, and their diligence showed.

Christian Lacroix: A fashion show can be like a book that gets off to a slow start. The temptation is to slam it shut and focus your precious reading time elsewhere, but if you stick with the story, you might just find yourself a delighted convert. That is what happened with the couture collection Christian Lacroix showed on Tuesday before a packed house that included Mme. Bernadette Chirac and, for the first time in many a chapter, Bernard and Hélène Arnault.

The story got off to an odd start, and not in the sense of the wonderful oddness that lies at the heart of Lacroix at his best. Rather, one got the feeling that he felt uninspired with his material or his heroine, as if perhaps her story had grown too familiar. He opened with a peacock blue coat that swung out toward Balenciaga, and then meandered through a series of boho infidelities, haute rustic one moment, hyper courtly the next, almost always putting his coats and jackets over diaphanous semi-interesting underlayers.

What he did do was lay a foundation, quite literally, for the collection, showing everything over dense, hot-hued tights, sometimes a-glitter with silver and always punctuated by glistening ruby sandals. This set up the ebb and flow of a subtle circus act; it also allowed Lacroix to go sheer as could be without veering anywhere near vulgarity.

Still, it offered precious little to hold his audience rapt, at least until he turned his sights toward evening. Then everything changed, and all of the eccentric splendor that is his hallmark came into full flower. Out came mesmerizing gowns one after another, in those nearly delirious mélanges of color, pattern and embellishment. Accent on the nearly, because, while Lacroix reveled in the kind of flourishes he loves, he managed to control his more exuberant urges just enough, now giving his various heroines the distinctive personalities they deserve. Among the stunners: a haute Valentine of a dress in organdy and organza tied up with red bows; a ballgown with a lavish sea urchin embroidered bodice over a skirt in 18th-century taffeta; a fanciful floral-and-striped coat over a divine Empire gown strewn with fuschia flowers. It all made for a joyful ending — and left one eager for the sequel.