RING-A-LING: Diamonds shined on Sunday, but one of the biggest belonged to bling queen Jennifer Lopez, who replaced her 6.1 carat pink diamond engagement ring with a 14.59 carat oval-cut yellow diamond one from Fred Leighton —which was... 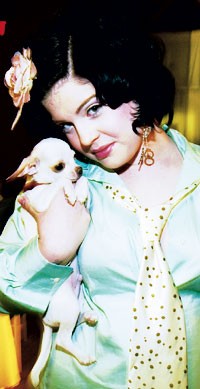 RING-A-LING: Diamonds shined on Sunday, but one of the biggest belonged to bling queen Jennifer Lopez, who replaced her 6.1 carat pink diamond engagement ring with a 14.59 carat oval-cut yellow diamond one from Fred Leighton —which was wrapped around the middle finger of her left hand. A message to Ben Affleck, perhaps? Or maybe she was just giving it her all since friends say she insists the Globes will be her only red-carpet appearance of the season.

FLAT OUT: So what gives with Sofia Coppola’s flats at Sunday’s award show? Well, they weren’t so much a choice of chic as of relief. The now two-time Globe winner broke her toe and had to do away with the heels she planned on wearing. And Coppola started a trend of sorts — by party time Sunday night, Maggie Gyllenhaal did away with her stilettos altogether. At the HBO after bash she traipsed around barefoot and fancy free in her bronze Lanvin.

IN STITCHES: It’s no secret Catherine Zeta-Jones likes things just so. And to ensure not a seam or wrinkle was out of place in the Oscar winner’s Oscar de la Renta gown, Ima — de la Renta’s top seamstress — was flown in at the very last minute to Los Angeles to stay overnight at the Douglas-Jones West Coast home. CZJ insisted on it.

BITCHES AND THEIR OWNERS: While Hilary Duff dropped by pet-less, Kelly Osbourne and Nicole Richie couldn’t put down their petite pooches even for a manicure at the L’Oréal Paris Lounge at the Silver Spoon Beauty Buffet, inside the cavernous Soho House in Hollywood last weekend. There, more than 300 guests the team serviced walked away with the new L’Oréal Volume Perfect lipstick and True Match Foundation. But it was at the actual Golden Globes that the beauty brand really power-branded: Its Ladies Lounge inside the powder room delivered touch-ups to Nicole Kidman, Charlize Theron, Gwen Stefani and Ellen Burstyn, among others.

Meanwhile, Mediaplacement organized its third annual HBO Luxury Lounge at the Peninsula Hotel, the favored roost for HBO talent Sarah Jessica Parker, Kim Cattrall and Hope Davis. Among the vendors participating were Smashbox Cosmetics, Maurice Lacroix Watches, Sports Club L.A.’s minispa, and Erica Courtney jewelry. At the Safilo eyewear display, Molly Sims hungrily tried on pair after pair of Armani shades, while crying out, “I hate to be such a sunglass whore!” Right. An eight-months-pregnant Cheryl Hines, while picking out Cosabella lingerie said, “I’m one month away and looking forward to wearing my favorite pre-pregnancy lingerie.” She selected the Infinity low-rider thong, which is also a favorite of mom-to-be Courteney Cox Arquette. Even local denim manufacturer Gasp got in on the act, gifting Parker with a size 2 skirt featured in this month’s In Style. After trying it on in her room, she sent it back for a size 0, which the company happily agreed to make custom for her.

PIPE DREAMS: Raffles L’Ermitage, among the most occupied luxury hotels during award show season, was in hot water on Saturday. Only metaphorically, that is. Guests at the Beverly Hills fortress had to do without as plumbers struggled to fix the problem. “That was the night of all the big parties,” said one guest. “People started looking for other hotels, which were all filled because of the Globes. I was ready to go knocking on the doors in the neighborhoods.” When it finally came on come supper time, she said, “it was hotter than ever.”

And Valentino’s Dennis Wong spent his days ensuring no fewer than six A-listers represented the house at the ceremony (not to mention all the VIPs at events throughout the weekend), while by night he entertained the locals at hot eateries around town or hit the party circuit in stride.

SHE WALKS IT AGAIN, SORT OF: Whatever happened to once-upon-a-time red-carpet favorite Pamela Dennis? She’s again reared her presence on the red carpet — well, at least its commentary sidelines — by creating looks for pals Joan Rivers and “Access Hollywood”’s Nancy O’Dell.