Hollywood Mixes It Up on SAG Awards Red Carpet

Double and triple takes abounded on the red carpet with a few mini trends in play.

By Marcy Medina
with contributions from Lindzi Scharf
on January 28, 2013
View Slideshow 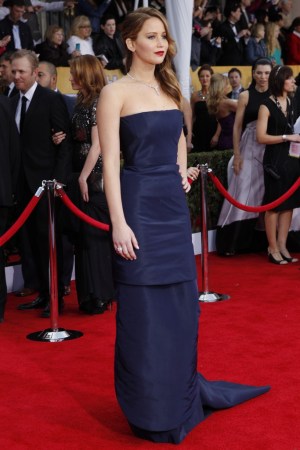 Fashion watchers got an eyeful at Sunday night’s Screen Actors Guild Awards when it appeared that Jennifer Lawrence’s navy Dior Haute Couture gown had split open when she stepped onto the stage to accept her Best Actress award. But Dior was quick to put the rumors to rest. On Monday, a spokeswoman for the fashion house said, “The dress is made with different levels of tulle and satin and that is what the viewers saw when Jennifer lifted her dress slightly. It was not ripped and there was no malfunction.…It was the design of the gown.”

Alex Newell of “Glee” stood out for channeling a fashion figure instead of a designer’s vision. “I’m wearing a cross between a cape and a blazer; I call it a clazer,” he said. “It’s inspired by André Leon Talley. I made a reference to him on the show and I was like, ‘Wait a minute, I am kind of like him.’ ”

It was a shame nobody else stopped to discuss their choices. Lawrence may have had the flu, but the rest of the pack had the photo op on the brain and skipped reporters altogether. The step and repeat was awkwardly stationed in the middle of the long carpet rather than at the beginning. As stars from Claire Danes to Kerry Washington dutifully lined up (and made fast friends with their neighbors), others, like Cotillard and Hathaway, somehow got fast passes to the front of the line, proving that when it comes to most things, including fashion, there is a pecking order.

Attendees at the Audi and Essie-sponsored Entertainment Weekly Pre-SAG Awards Party on Saturday night proved more talkative. Non-nominee Joel McHale admitted he attended in the name of fashion. “This is so I can get another free coat. And you think I’m joking!” he told fellow guest Eliza Coupe, though he failed to mention the label.

Ashley Madekwe also used the party as an opportunity to play dress up. Wearing a ladylike Monique Lhuillier number, the “Revenge” star seemed perplexed by the night’s purpose. “Is there anyone here who is nominated? If I was nominated, I’d be at home right now and anxiety ridden,” she said. Her plans for the big day proved equally low key: “I typically skip the ceremony after watching the fashion. Sometimes I’ll DVR it and will skip to the good bits. Is that terrible?”

Bradley Cooper escaped photographers with a private entrance. Later, his “Silver Linings Playbook” costar Chris Tucker, fresh from the Producer’s Guild Awards held nearby, swung by in a suit which he called, “Tom I-Can’t-a-Ford.”