Moore From L.A.: How Hollywood Can Lead Fashion’s Diversity Push

The global outcry over three major fashion brands being exposed for using racially charged imagery at the same time proved to be good timing for the Black Design Collective, which is looking to Hollywood to help it grow.

“I, Spike Lee Of Sound Mind And Body Will No Longer Wear Prada Or Gucci Until They Hire Some Black Designers To Be In Da Room When It Happens. It’s Obvious To Da Peoples That They Don’t Have A Clue When It Comes To Racist, Blackface Hateful Imagery.”

When the “BlacKkKlansman” director posted this to his Instagram account on Feb. 8 during the heat of the Gucci, Prada and Burberry blackface and noose imagery scandals, it was a warning shot to fashion brands that the Hollywood talent they count on to be their most visible ambassadors might no longer be willing to fulfill that role — and in the thick of the high-stakes red-carpet season, too.

“Hollywood is at the front line of all these cultural discussions, and suddenly no one was going to wear these clothes again if something wasn’t done, and fast,” one p.r. told me of the panic that ensued internally at brands, adding that months of work, including custom gowns, were scrapped when talent decided to shun the offending labels for the remainder of the season.

I,Spike Lee Of Sound Mind And Body Will No Longer Wear Prada Or Gucci Until They Hire Some Black Designers " To Be In Da Room When It Happens". It's Obvious To Da Peoples That They Don't Have A Clue When It Comes To Racist, Blackface Hateful Imagery. WAKE UP. Ya-Dig? Sho-Nuff. And Dat's Da "Coonery And Buffoonery” Truth,Ruth.

Luxury brands responded in a matter of days. On Feb. 13, Prada created an inclusion council led by director Ava DuVernay (though when it came time to go to the Oscars Vanity Fair Party on Feb. 24, she wore a gown by the African American designer Charles Harbison, not Prada). On Feb. 15, following a meeting with Harlem designer and Gucci collaborator Dapper Dan and black leaders, chief executive officer Marco Bizzarri unveiled its Changemakers Project with a global director of diversity and inclusion, as well as a scholarship program to cultivate more diverse designers. (”If Beale Street Could Talk” star Kiki Layne, who had been sporting Gucci all through awards season, wore Versace to the Oscars instead.) And although Lee has sat in the front row of Prada runway shows, and worn Gucci on the red carpet, he picked up his Oscar wearing a purple suit by black designer Ozwald Boateng to honor Prince, “Love/Hate” rings to honor his film “Do the Right Thing” and a pair of custom gold Nike Jordans. 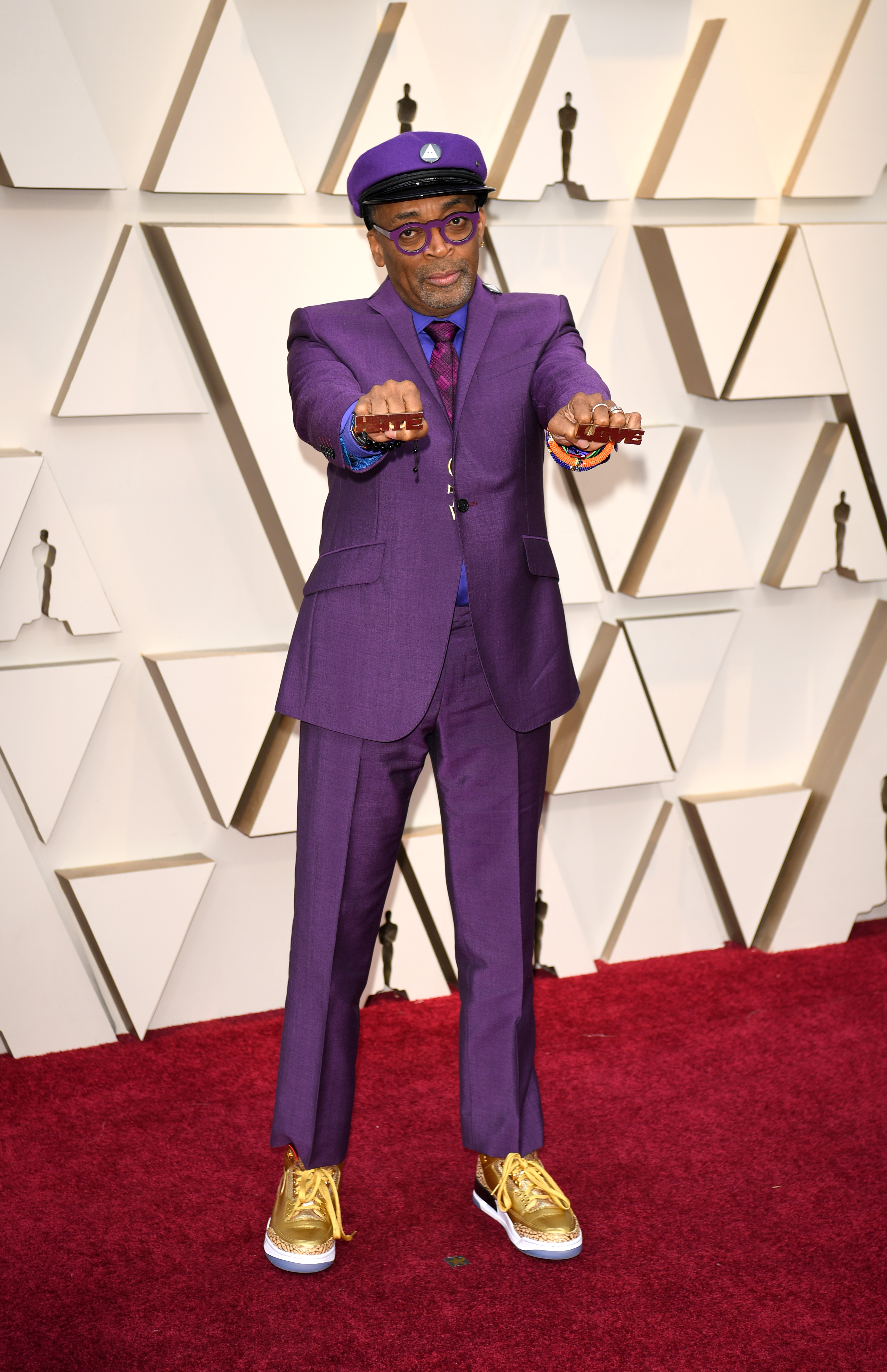 The global outcry over three major fashion brands being exposed for using racially charged imagery at the same time proved to be good timing for the Black Design Collective, a year in the making, which revealed its formation on Feb. 13 in WWD. Based in L.A. and led by designers Kevan Hall, Angela Dean and TJ Walker of Cross Colours, the organization is on a mission to help more black fashion designers get into the industry by providing financial resources and mentorship, and to provide visibility to ones who are already here and often overlooked. And the founders are looking to Hollywood for help.

On Saturday in L.A., the Collective will hold its inaugural event, honoring Oscar-winning “Black Panther” costume designer Ruth E. Carter, who has been working with Spike Lee on and off for decades, and agrees with his warning shot to the industry.

“I sat in on a couple of meetings with designers talking about noninclusion…and all I can say is I’m glad I’m not a fashion person because I see how many levels of things they have to deal with,” said Carter, who wore B. Michael to the Oscars.

The AT&T-sponsored fete is being held at the Fashion Institute of Design & Merchandising, where Carter’s work is on view in the museum as part of its 27th annual “Art of Motion Picture Costume Design” exhibition. Gabrielle Union, Phylicia Rashad, John Singleton, Loretta Devine and Tina Knowles-Lawson, Vondie Curtis-Hall, Mykelti Williamson, costume and fashion designers Waraire Boswell, Christopher Enuke, Eric Martin and Marci Rodgers and more are expected to attend and support.

“The things that took place around the time we were making the announcement proved how important it is to have a platform to represent ourselves,” said Dean during an interview at the Black Design Collective offices in L.A. “It isn’t the objective to fight against any one thing, it is to be a collective body of representation.…In numbers we can say we are here, we’re relevant.”

Hall, whose Kevan Hall Signature eveningwear sells in boutiques across the U.S., Canada and the Middle East, has worked in the industry for more than 30 years, including as the first black creative director of Halston, a move that was heralded as revolutionary when in happened in 1998. “There are still not enough black designers working in design rooms. I have had my own business for a number of years now, so I haven’t had to struggle with getting a job in some time, but for a lot of talented people who can sketch anyone under the table, they just can’t find the work.”

“It’s almost like there is a shield,” offered Dean, bringing up the fact that black designers are often hired as freelancers, but not full-time members of design teams. 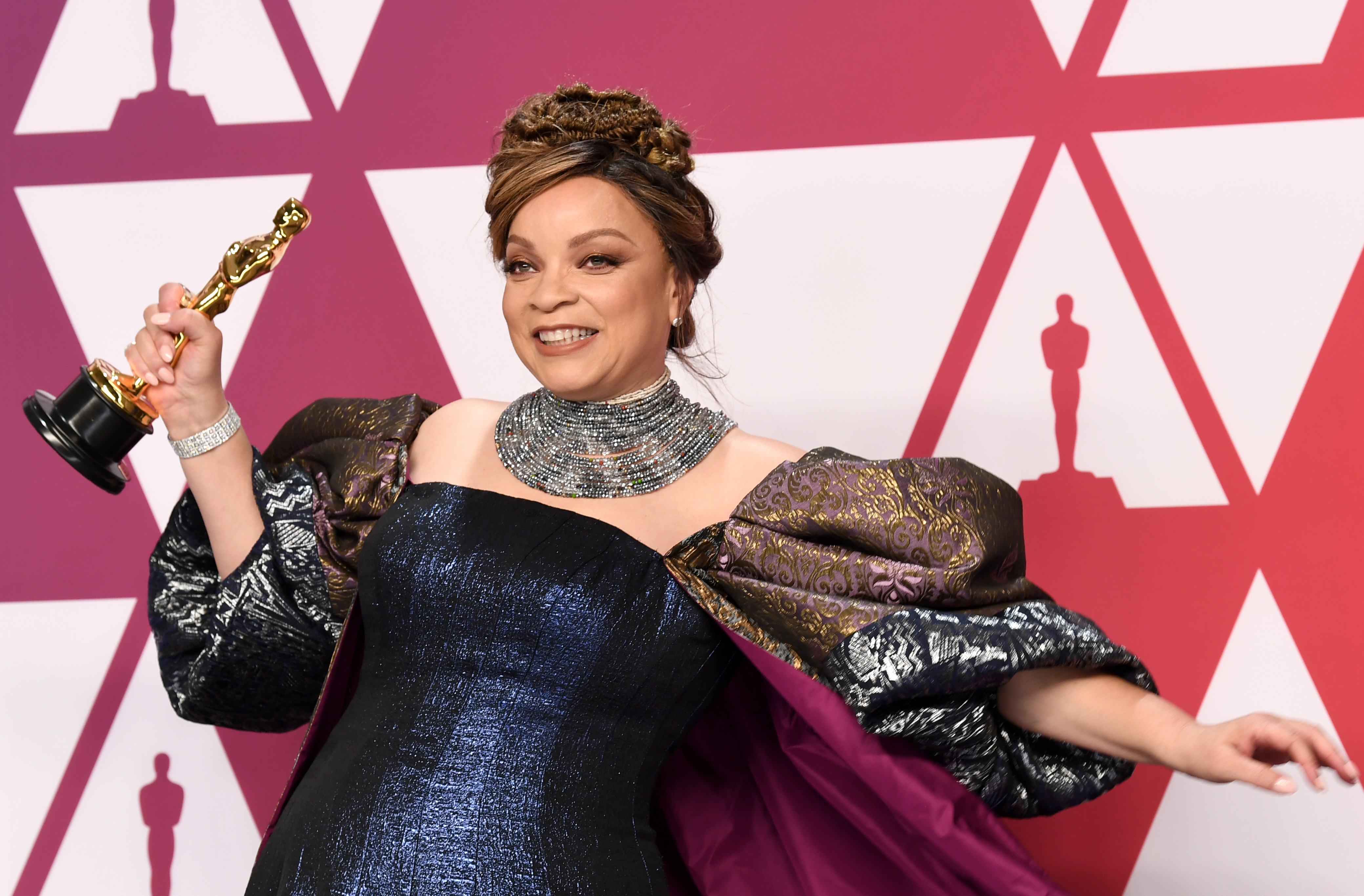 There’s also a shield when it comes to Hollywood talent representing black designers, the founders agreed, despite a handful of high-profile red-carpet moments in the last year or so, from Issa Rae wearing all-black designers to host the CFDA Awards in 2018, to Jay Z wearing Virgil Abloh for Louis Vuitton to accept the Vanguard Award at the NAACP Awards just last month. “We are starting to see it but I would like to see more,” said Hall, who has dressed Ruby Dee, Tia Mowry, Tina Fey, Virginia Madsen and many more over the years.

Although Prada, Gucci and Burberry were nearly universally shunned by Hollywood A-listers at the Oscars, they have been back on red carpets in the last month. (Because let’s be honest, relationships between celebrities and luxury fashion labels can be lucrative, in the form of dressing contracts and campaign opportunities.) But the founders of the Black Design Collective hope stars will continue to support black designers, and that when they do, the media will give them the same exposure as other designers.

“Celebrities are very influential. And when we are overlooked or not even spoken about or written up when we work hard to get on the red carpet, that’s a problem,” added Dean, who makes custom clothing under the DeanZign label for Missy Elliott, Lisa Leslie, Wendy Williams and more, and has a ready-to-wear line in development.

The organization is also hoping to educate the public through its web site and social media channels, which have been promoting the work of black designers on the red carpet at the NAACP Awards, for example, as well as spotlighting Stephen Burrows, Jon Haggins, Will Smith, Elizabeth Keckley (dressmaker to Mary Todd Lincoln) and other black designers throughout history.

“We also can’t forget the mass influence,” said Carter, pointing out that there should be more black-designed fashion not just on the red carpet, but at all price points, including at Walmart, to touch the audience her film did.

That’s why it’s essential to get more black talent in the industry at all levels, said Hall, noting that the group has put together a mentor program, led by Walker, who is a fashion professor at L.A.’s Trade Tech College, that will pair students and working designers with mentors with similar specialties, whether that be sportswear, eveningwear or knitwear.

“There are things we are doing to make sure we’re in the community to let people know we are here,” said Walker, who was heading to Howard University to talk up the program to students there.

Then there is the financial piece. The founders say they have had discussions with Wells Fargo about coming on as a partner, and are looking to big corporations like Marvel, ABC and Nike to create business opportunities and donate scholarship funds for designers so there are more of them in the rooms where it happens, as Lee (and Lin-Manuel Miranda before him) wrote.

“When there is inclusion, there is accountability. There are people there to say that’s not quite right based on my culture or my history, there are checkpoints,” said Walker, steering the conversation back to the failures of Gucci, Prada and other brands. Walker and his partner Carl Jones are relaunching Cross Colours later this year, which will be the 30th anniversary of the brand created under the premises of making “clothes without prejudices.” Maybe Walmart should ring them up. The timing couldn’t be better.