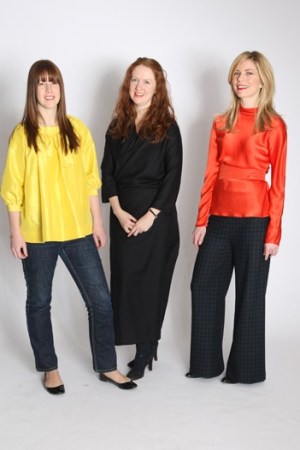 “I started making my own clothes in eighth grade, because that’s when I stopped being able to afford the things I really wanted,” explained Katie Hatch, the style director at Martha Stewart Weddings and possessor (or victim) of what she calls “Champagne tastes.” Turns out, whenever she wore her homemade pieces over the years — silk wrap skirts, wool coats, print blouses — Hatch fielded requests for duplicates from close friends, in particular Mara Papa, a hedge-fund executive assistant, and Abby Low, a graphic designer. “We always wanted what she was wearing,” said Papa.

Cut to summer 2008, when Hatch, having had one of those life-is-short, do-what-you-love conversations at a wedding with an elderly gent named Harvey Faircloth, offered a business proposition to Papa and Low: She’d whip up a 20-or-so-piece collection, Low would handle branding and marketing and Papa would take care of sales. “It helps that we’re starting out at a time when expectations are low,” said Hatch of launching their line for fall — yep, it’s called Harvey Faircloth — in the current economic climate. “We have a smart, snappy aesthetic, and this feels like the right moment for it.”

Rendered in clean colors — orange, navy, black and yellow — and luxe fabrics (stiff silks from Asia, cotton and wools from Italian mills), the collection winks at the concept of clothes doing double duty: A black wool coat with a wide, biblike collar can be worn wrapped or undone; silk blouses have volume or nipped waists with sashes; striped apron dresses can be layered over the line’s cotton shirts or worn alone. The effect is both fresh and efficient: Many of the pieces work for both day and evening (an obvious recessionary perk).

“I’m very interested in clever patterns and construction, and the way men’s shirting can be used to create a more feminine silhouette,” said the Arizona-raised Hatch, whose father, a bona fide cowboy who made his own saddles, taught her to sew. “He did a lot of embroidery on his saddles and is clearly a maximalist, whereas I’m a minimalist,” she added.

Indeed, save for the button detailing on pin-striped dresses and tops, these are unadorned clothes, wholesaling for between $39 and $172 (after their unveiling at D&A last month, Hatch said a number of boutiques have placed orders, including Milkmade in Venice, Calif.; Elsa Arms in Providence, R.I., and Cabana in Dallas). As for her day job, Hatch has no plans to leave the world of Martha. “It’s a very creative place, obviously,” she said, “and [my colleagues] have been admiring my clothes for years.”