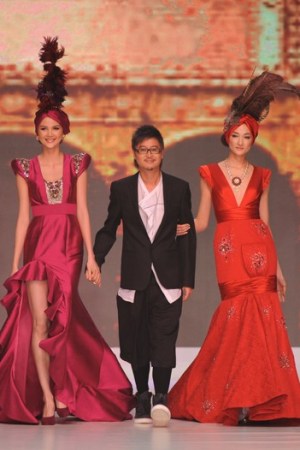 HONG KONG — This city’s fashion week, which capped its four-day run Jan. 21, is growing in both size and international scope, but retailers remain cautious as the global economic crisis persists.

The fall-winter edition of Hong Kong Fashion Week and concurrent trade show World Boutique saw the number of exhibitors jump 17 percent from the previous year to 2,000. Participants hailed from 30 countries and regions, including first-time presenters from Russia and South Africa. Also worthy of note: Vivienne Westwood creative director Andreas Kronthaler flew in to debut the brand’s crossover collaboration with Lee Jeans in a runway show.

But all the fanfare took place against a less-than-encouraging backdrop for business. Total exports of clothing and clothing accessories from Hong Kong in the first 11 months of the year were down 18.8 percent from a year earlier to 163 billion Hong Kong dollars, or about $21 billion at current exchange.

Lin Yi Wang, a buyer from Shanghai, thought Ho’s collection was accessible and on-trend with Chinese taste for exuberant eveningwear.

“Dorian Ho is already quite popular with Chinese celebrities and is a big name in the local Hong Kong fashion scene. The designs aren’t particularly fresh or interesting, but there is a demand for his style of partywear,” Wang said. “His name is one that I will keep in mind.”

Mina H. Mahtani, owner of mid- to high-end Maya boutique in Hong Kong, said consumer confidence is at an all-time low. Catering to the expatriate community, the boutique experienced a small boost in sales over the holiday period but foot traffic has since dwindled, she said.

“Retail is still shockingly bad,” said Mahtani. “I think it’s important to have new stock every 10 days, but I didn’t really see anything at the fair that I liked. Some of the exhibitors are asking for exorbitant prices. “

New high-end brands, such as Hong Kong’s Oriental Cashmere Corp. Ltd.’s own line Brown-Allan, are finding it difficult to find distributors. Last month, Brown-Allan opened a store in Ningbo, China, selling basic cashmere sweaters at 2,000 to 3,000 renminbi, or about $293 to $439. The company’s fashion designer Samantha Au said the store has been doing well as the demand for quality products in lower-tier Chinese cities are increasing and the company plans to open more stores in China this year.

“We are now looking to find distribution in Europe but it hasn’t been easy. We are a new brand and we don’t have competitive prices,” explained Au. “We’ll see how it goes, but we may be better off focusing on growing our brand in the domestic [Chinese] market.”

Speaking at a seminar during the week, Mango’s chief executive officer of international expansion and board member Isak Halfon discussed China’s shift from a trade-oriented market to a consumption boom.

Mango entered the Chinese market in 2002 and has 70 stores across the country. It expects to reach 100 stores by the end of the year, he said.

“One mistake we made was assuming China was a one-market country,” Halfon said. “Each city has its own different characteristics and trends. The only way to deliver exactly what the consumer wants is to work closely with local partners.”