The brand exported a few New York signifiers — including Chloë Sevigny — to celebrate its debut. 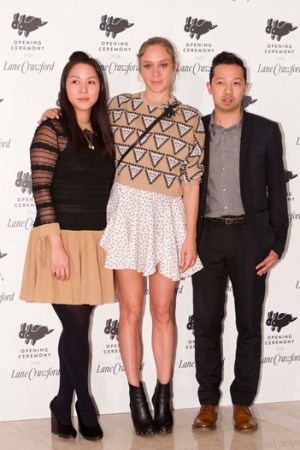 Opening Ceremony exported a few New York signifiers for its Hong Kong debut last week. To celebrate the brand’s venture into the Chinese market, life-size animal statues, including an ostrich, horse and others, were shipped from its New York shop to the Lane Crawford store in Hong Kong’s IFC mall. Then there was the fare, which included hot dogs, mini hamburgers and popcorn handed out from vending carts.

“You’re the tallest Asian man in the world,” shouted one onlooker.

Opening Ceremony co-founders Humberto Leon and Carol Lim collaborated with Lane Crawford to create a capsule line for the Hong Kong and Beijing markets, including a special logo featuring two rabbits meant to represent the duo, who were both born under the Chinese zodiac sign. (Coincidentally, 2011 happens to be the Year of the Rabbit.) Official Opening Ceremony pal Chloë Sevigny was also along for the trek. The actress said she was still getting over jet lag, but had already been shown all over town.

“I went to the Peak,” Sevigny said, using local parlance for Victoria Peak, the island’s highest point. In addition to the natural wonder, she said she’d noticed some very trendy kids running around the city. As for current projects, Sevigny said she’s working on a second collaboration with Opening Ceremony, as well as a miniseries for HBO.

“But I’m not supposed to talk about that,” the ever-discreet Sevigny said.