Retail exec and jewelry maker are cited for philanthropy. 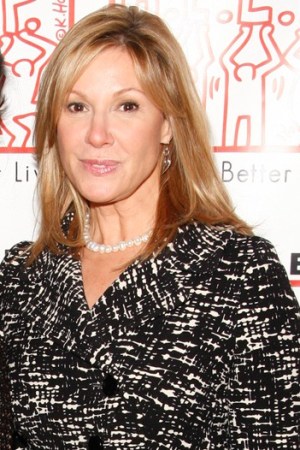 The luncheon Tuesday at Tavern on the Green drew 400 guests, raised $538,000, and established The Anne Keating Domestic Violence Survivor Scholarship Fund to support graduates of the organization.

The event was also a platform for women to recount their heart-wrenching cases of abuse until finding refuge at Help USA facilities. “They made us feel safe — immediately; they gave us a home,” said Dawn Cacciatore, a mother who said she was stalked by her husband and once choked to the point of unconsciousness.

“It’s incredible to imagine all the hardships they have gone through,” said actress Marcia Gay Harden, who hosted the event with Deborah Roberts of ABC News. “It’s a gift that you allow us to hear your stories. I love that this lunch is about scholarships. It’s so beautiful.”

“I’m so inspired by your courage,” Katie Couric said to the women, before presenting Keating with her award. “Anne’s the ultimate go-to person with an uncanny knack for putting people together. I work for a network but Anne is a walking version of one. She’s the fairy godmother to a host of charities and organizations.”

Couric also praised Keating for getting Bloomingdale’s to be the first corporate sponsor of Couric’s colon cancer campaign. “Colon cancer wasn’t necessarily fashionable,” the CBS anchor said. “It was a very daring thing to do 10 years ago.”

Since forming her company in 2003, Hornig has donated 100 percent of the profits to charities. Bergdorf Goodman, which sells the jewelry exclusively, “took a chance on an unknown, middle-aged designer who was in financial services,” said the designer. Her husband, George, surprised her at the luncheon with a gift — he’s funded the Joan B. Hornig Community Art & Design Center in the Help USA Newark residence for low-income families and people with AIDS/HIV.