For the incredibly superstitious Dior, who was known to consult his tarot card reader before every collection, the breaking sun would have been just the auspicious turn required after a violent morning downpour on this small Normandy seaside town... 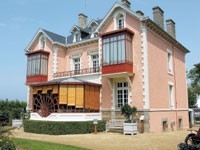 For the incredibly superstitious Dior, who was known to consult his tarot card reader before every collection, the breaking sun would have been just the auspicious turn required after a violent morning downpour on this small Normandy seaside town where he was born.

Dior’s family house here is now a museum devoted to the memory of the man who invented the New Look and revolutionized post-war Paris fashion.

His centenary has given the museum a reason to put on its biggest and most ambitious show to date: “Christian Dior, Homme du Siecle,” or “Man of the Century.” It is meant to draw parallels between the influences of Dior’s youth here, his artistic proclivities as a young gallery owner in Paris and his fashion career, which began in 1947 when he founded his house on the Avenue Montaigne.

Several dozen of Dior’s most recognizable dresses are juxtaposed alongside paintings of artists he knew or admired, from Christian Berard and Balthus to Emilio Terry and Andre Derain.

A selection of Dior’s personal effects, including his lucky star and the daily diary he kept in 1957, the year he died of a heart attack after going to a spa in Italy to lose weight, are spotlighted.

And there are bottles of Dior perfume dating back to the designer’s first fragrance, Miss Dior, as well as confections created by his successors, from Yves Saint Laurent, who catapulted to fame when, at 21, he succeeded the great couturier, to John Galliano, who guides the house today.

But it is the quaint pink stucco belle epoque house and the contiguous ambling garden, much of which Dior designed, that best bring to life other facets of his aesthetic leanings and superstitions.

Each of his collections had a “Granville” model. And in every show at least one model wore his favorite flower, the lily of the valley, which is planted abundantly in the garden in Granville.

“This was his paradise lost,” said Marie-France Pochna, who wrote a 1994 biography called “Christian Dior.” “It was the starting point for everything. Everything he created after was his attempt at getting back a lost perfection.”

The Diors lived in the house in Granville, perched on a cliff with magnificent views over the dramatic coastline and sea, until 1910, when they moved to Paris. But they owned it until 1931, when Dior’s father went bankrupt and the house was sold off.

Arnault said he was struck by the extent to which the house had been integrated into Dior’s symbolic universe.

“The pink of the house is Dior pink,” he said during a press conference.

Flanked by French Minister of Culture Renaud Donnedieu de Vabres, who has designated the Dior exhibit one of 12 in France this year with “national interest,” Arnault related his own childhood memory linked to Dior. He recalled that his mother used to wear the Diorissimo jasmine-based fragrance.

“The garden here is redolent of jasmine,” said Arnault. “I smell my mother in this garden.”

Dior is the cornerstone on which Arnault built the LVMH empire, with brands from Louis Vuitton and Celine to Givenchy and Kenzo. He got it as part of the bankrupt Boussac textile business, which he acquired in 1984 for a symbolic franc. Dior had sales of 595 million euros, or $773.5 million at current exchange, last year, with LVMH’s sales rising to 13.2 billion euros, or $17.16 billion.

Donnedieu de Vabres called Dior representative of the French “cultural exception,” and the ambassador for “French elegance” around the world.

“It is remarkable because [Dior] shows that culture is also an economic and industrial motor,” he said. “Culture can create value, employment and wealth. Culture is at the heart of our influence [as a country] and our economic future.”

After a private visit of the exhibit with the minister, Arnault said he was impressed by the modernity of many of Dior’s creations.

“I was looking at a dress and thought it was a Galliano,” said Arnault. “I was very surprised to learn it was by Christian Dior. He was incredibly modern.”

He added, “Creation remains the bedrock of the house. Marketing comes after the creation.”

“I’m very sensitive when I see a runway show,” he said. “I like to be surprised, and it’s when I’m surprised that I know its good.”