Shayne Oliver stepped it up a notch in Florence on Wednesday night. 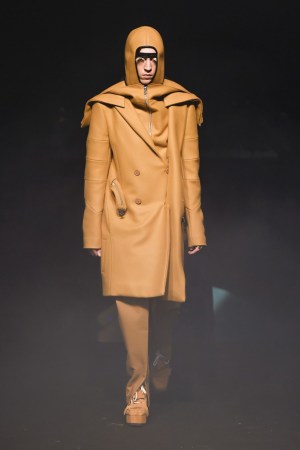 Shayne Oliver stepped it up a notch in Florence on Wednesday night. Elaborating on his fling with tailoring last season, Pitti Uomo’s guest designer went full steam ahead with a sartorial aesthetic at the bellwether fair’s fall-winter edition, though not without putting his rebellious stamp all over it.

These were no suits for wallflowers. Cue weightlifting belts strapped like corsets over tailored jackets, cutouts on the back and shoulders of topcoats and heavy padding borrowed from motor-cross uniforms.

While some looks were overworked and veered into conceptual Martin Margiela territory, the collection felt cleaner and more grown-up. Oliver let go off his XXL-logo obsession (the HBA characters were barely visible embroidered on arm bands), which was a good thing.

Instead, the bravado came through in a series of compelling outerwear pieces: Mixed-media parkas with patches of shearling that transitioned into hooded sweatshirts around the neck; and sleek car coats bearing multicolored graphic patterns.

Emerging from the terrace of an ancient villa set high up on the hills of Florence, Oliver’s gang of cartoonish characters sported funky hairdos, Seventies platform boots and fake white eye-lashes. It was an unusual, intriguing marriage of Italian luxury and outré street sub-culture.
– Paulina Szmydke