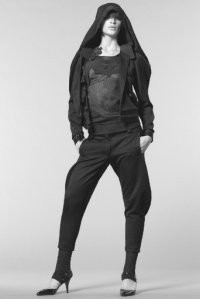 PARIS — The City of Light has long been a hotbed of new creative talent. Following are several emerging designers who hope to make their marks this season.

Having spent the last decade behind the scenes at Claude Montana, Lanvin, Valentino and Prada — as well as spearheading ready-to-wear and couture as artistic director for Louis Féraud for two years — Yvan Mispelaere has finally elected to strike out on his own.

The 35-year-old designer’s first signature collection, branded Mispelaere, will be shown on the catwalk in Paris on March 11.

“I guess it’s been long in the making,” he said in an interview. “But it’s been in the back of my mind for a long time.”

Mispelaere described the collection as a meeting of opposite worlds. “I learned a lot about the process of making clothes in the couture,” he explained. “There will be a couture feeling to the collection, with very feminine details and fabrics like cashmere and silk. But, on the other hand, there’s something more brut, more sportif and very ready-to-wear about it. The collection blends the delicate and the high tech.”

For example, Mispelaere said he spent long hours developing new fabric techniques, such as melding Lycra spandex cutout appliqués onto flannel. “The result is like a print. I’ve never liked prints. But this seemed like a new way to approach them.” He also tapped a factory in France specialized in workwear to make some pieces.

As for his color choices, Mispelaere remained focused on flannel gray, white, emerald and black. He said the starting point of the collection sprang from men’s clothes in Louis XIV’s court. “I like the extravagance of their outfits,” he explained. “But if it’s a reference for me, it turned into something else, more contemporary and less obviously referenced, during the design process. I also wanted it to be sporty, but not in a hip-hop way. I found that aspect in sports like tennis, golf and cricket. I wanted it to be easy but sophisticated.”

Australian Martin Grant is not a new name for the fashion crowd. Over the last seven years, he has quietly built a name for himself working out of a shoebox shop on Paris’s funky Rue des Rosiers. Actresses Cate Blanchette and Lauren Hutton are fans of his sophisticated, slightly retro clothes. About 10 stores carry his wares, including Barneys New York, which has stocked his collection for several years.

But this season, Grant, 35, felt it was time for a change. He plans to move his boutique to larger digs and to increase his visibility by staging a fashion show on March 8.

“Over the last five years or so, I’ve been working quietly, building the business step by step,” Grant said. “But I’ve never concentrated on trying to get my name out there. Now I’m ready to move to the next level. I didn’t want to take off and not be able to follow through with deliveries and production. I’ve got those aspects of the business down pat now.”

Grant, who describes his collection as “classic with a twist,” also said he will expand the number of silhouettes in his line. “I’m diversifying the line because I’m really well known for my coats now,” he offered. “This collection will be structured and tailored. The feeling is a mix between fencing and samurai. But those influences remain subtle; nothing too extreme.”

Over the last 15 years, French designer Robert Normand has accumulated experience, working for houses from Lanvin to Hervé Leger. Knitwear was always his specialty and it remains so with his signature line. “It was the most logical thing to do,” said Normand. But over the last year, the 33-year-old designer started to enlarge his fashion vocabulary, adding coats, skirts and trousers. “I wanted to become more pertinent in a fashion sense.” The efforts are paying off. Sales last year were $215,000, and Colette, the über hip Paris store, has picked up some of Normand’s pieces. Starting this season, so will the upscale Bon Marche department store. Normand describes his style as “girly with a dash of sport” in it.

For fall, he has prints on his mind, with small flowers and trompe l’oeil motifs. His voluminous coats come quilted with high, cape-like collars while colors run from pale gray to vibrant red and pink. “I don’t find myself a typical French designer,” he said. “I don’t do bourgeois chic. It’s more girly and cute.”

Don’t feel out of the loop if you haven’t heard of Auguste. Over the last 20 years, the house has remained behind the scenes producing leather pieces for designers such as Karl Lagerfeld and Martin Margiela. But owner Guy Bismuth now has his eye on making the house a recognized brand among the buying public. He hired Belgian designer Crstof Beaufays, 30, winner of the grand prize at the 1999 Hyeres fashion festival, to design a capsule collection of leather pieces that will be presented to buyers and press during Paris Fashion Week. The company hopes to get 40 shops to buy the line the first season.

Beaufays, who has worked at Montana, came to Bismuth’s attention via Olivier Theyskens. “Olivier said Crstof was my man,” said Bismuth.

Beaufays only started at Auguste in January. “Time was short,” he explained. “Guy wanted a collection for March. I designed the collection in three days.” Working around a military theme, Beaufays designed leather coats with epaulettes, leather jogging pants with sergeant’s stripes on the knees and multifunctional jackets with patterns that are a riff on camouflage. Next season, Auguste plans to branch out with knitwear.