Hot Sox is inviting customers to slip into something that's cozy and good for the environment, too. 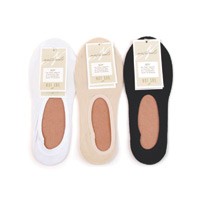 NEW YORK — Hot Sox is inviting customers to slip into something that’s cozy and good for the environment, too.

The legwear firm is launching a socks collection called Hot Sox Naturals that seeks to marry style with a commitment to preserve the Earth’s resources.

“The environment is one of the top concerns for most Americans today,” said Gary Wolkowitz, president and design director of Hot Sox, which was founded in the Seventies and is based in New York. “And we’re taking a stand that this is a major concern for us, too. It’s just a first step, but we’re very proud of this concept.”

The Hot Sox Naturals collection features 10 silhouettes, including peds, trouser socks and anklets, knit from fibers such as bamboo, soy, flax, linen and organic cotton. The color palette reflects the collection’s earthy bent, with shades such as white, ivory, beige, olive green and black. Each style is finished with an embroidered or printed leaf logo and packaged with a hangtag explaining the fiber used on the particular style and the collection’s ambition.

“This is certainly not the first time an organic cotton or linen sock has been made,” Wolkowitz said. “But it’s different to put a whole group together and market it this way.”

Hot Sox also will print its brand promise on the hangtag. Details are being completed, but the firm intends to donate a portion of the sales of Hot Sox Naturals to an environmental cause. It also is working to produce the socks in factories that are trying to minimize environmental pollution.

“We know we’re just scratching the surface,” Wolkowitz said. “We have a long process ahead of us to continue to improve the conditions under which clothing is brought into this world, but we’re committed to doing our part.”

Hot Sox said it will target the line, which is anticipated to launch at retail in spring 2007, to better department and specialty stores. A spokeswoman said that key areas where the collection will be a good fit are California and the Pacific Northwest and eastern states such as Vermont and New Hampshire. Prices are not yet confirmed, but are anticipated to range from $7.50 to $8.50.