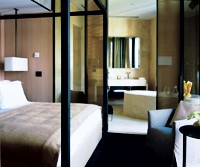 MILAN — Bulgari has unveiled its latest jewel — and the company is hoping the brand extension will dazzle as much as a mountain of diamonds.

On Tuesday morning, chief executive Francesco Trapani unveiled Hotel Bulgari, the first in a chain of seven luxury hotels and resorts that will bear the brand’s name. Prices for the hotel’s 52 guest rooms — there will be 58 by year’s end — range from $680 to $890 a night for a standard room up to $4,160 for the Bulgari suite.

“It’s an instrument we’re using to reinforce our brand image,” Trapani said as he cut the ribbon during a news conference at the hotel here, located on Via Fratelli Gabba, just behind La Scala.

The ceo is hoping the hotel will build the Bulgari brand in the eyes of the public, and he’s already thinking about the myriad cross-marketing and public relations opportunities.

“There’s no reason why we can’t sell an engaged couple their rings, host their wedding at our Milan hotel and then send them off to our Bali one for their honeymoon,” Trapani told WWD in an interview last month.

Bulgari’s next hotel will open on the Indonesian island at the end of 2005. It will feature 60 cliffside villas, each with a pool and terrace. “We want it to be the best resort in Bali,” said Trapani, adding the company also has two “magnificent projects” on the boil in London and New York.

Trapani said he plans to pick through the Bulgari files to find prospective hotel clients and open Bulgari stores in his future hotels where the brand isn’t already present.

“Of course, if clients come and see something ugly, poorly managed and if the food is bad, then it could damage the brand and the PR machine becomes a bomb,” he said with a laugh. “But that’s not going to happen.”

Indeed, he said during Tuesday’s news conference that the attention paid to detail “goes back to another time, like a circa-1930 hotel or a cruise ship.”

Designed by the Italian architect and interior designer Antonio Citterio, Hotel Bulgari has chocolate walls, dark furniture and high ceilings, and a look more monastic than English country. The materials, however, are rich. The walls are made of teak, and some of the furniture is covered in black leather, while the low, wide-backed armchairs and long overstuffed sofas are swathed in organic cotton.

Upstairs, the rooms are furnished with the same cotton fabrics in earth tones like barley, chocolate, ecru and heather. In the spirit of the property’s past life as a convent, some of the rooms even have designated meditation corners, complete with tatami mats.

Downstairs in the spa, butterscotch stone from Vicenza covers the walls, while the underwater steps on the shallow side of the emerald green pool glitter with gold mosaic tiles reminiscent of the ancient world.

Trapani said it was crucial that Citterio create a contemporary, but not a minimalist, feeling. “Bulgari is not about minimalism — which is why we used heavy, rich materials. This is not a boutique hotel; it’s a big, prestigious hotel, which is why we wanted a sense of gravity.”

The ground-floor restaurant looks out onto a garden, which has its own meditation paths for solitary walkers.

Trapani said that, since announcing plans for a hotel chain with Marriott in February 2001, there have been some changes. He admits that opening seven hotels by 2008 now seems “a bit on the optimistic side,” as it has not been easy finding ideal properties. “And I don’t want to compromise the uniqueness of this project. I don’t want to open hotels for the sake of it.”

Trapani also said the original budget foresaw spending about $10 million on average for each hotel. The Milan project, however, cost less than that. Indeed, Trapani said Bulgari is renting the Milan space from a real estate company that paid all the building’s restructuring costs.

With regard to the Bali resort, Bulgari won’t be investing anything — a local investor will pick up the bill, and Bulgari will collect royalties.

Trapani confirmed, however, that the estimated value of the seven projects will still be in the region of $800 million. However, the format of the new ventures means Bulgari’s financial exposure to the hotels will be minimized compared with the original plan.

Trapani said the hotel project isn’t going to have an impact on the company’s consolidated numbers. “It’s not going to make a difference to our core business,” he said.