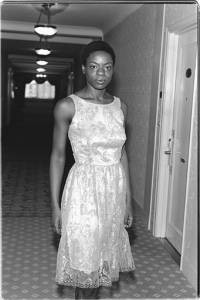 NEW YORK — As retailers continue their efforts to minimize risks by keeping lower inventories and buying closer to season, vendors are reacting with tighter, but not necessarily basic, collections, according to ready-to-wear firms at the recent round of hotel trade shows in New York.

Vendors also said the pressures from buyers, the rocky stock market and uncertainty about a war in Iraq are keeping them on their toes. Some said the stress makes them work harder and turn out more creative collections, as many ventured outside their regular design realm.

This was notable at San Carlin, the Denham Springs, La.-based eveningwear line whose gowns are worn in the grand ballrooms of the South, showing at American International Designers at the Waldorf Astoria, as it ended its six-day run Thursday.

For spring, the taffeta and jewel-encrusted styles are still a mainstay, but newness came by way of chiffon. Colors such as yellow, blue, orange, lime green, coral and white popped up in bold prints on silk chiffon styles featuring low-cut necklines and high slits on the leg. In case the prints are too much to handle for some buyers, San Carlin co-owner Carla Jumonville said styles are also available in basic colors.

Lina Kaloti, who owns specialty store Al Boushiya in Abu Dhabi, the capital of the United Arab Emirates, said her customers venture toward color with lots of embellishment. At San Carlin, she said she always buys matching stoles so her customers can cover their shoulders, as is custom in most Islamic countries.

Though the chiffon was new at San Carlin, prices for the dresses remained around $1,300 wholesale.

“Since retailers are avoiding big inventories, we’re doing lots of special orders,” Jumonville said. “We sold 22 dresses in two days at Julian Gold in Austin. That’s a lot for us.”

Special-order business was also up at Levino Verna, where the designer said sportswear knits were the most successful. Also of note was a short lace dress made from reconstructed shawls. Production is limited for the lace dresses layered over gold silk charmeuse, which wholesale for $675, Verna said.

Abigail Kate, which offers novelty suits wholesaling for $300 and up and dresses between $200 and $400, features natural-fiber fabrics from Europe, such as knitted wool and wool tweeds. The novelty pantsuits and skirtsuits in nubby tweeds featured frayed trims and a ribbon waistband.

Sales this year for the 22-year-old line are expected to be around $400,000, she said. Currently, the namesake designer said she sells about 100 stores and is looking to expand distribution.

One of a few international vendors at the Waldorf was Prague-based Taiza, which was also the only line to hold a runway show during fashion week. Taiza currently has a boutique in Prague and Paris, but U.S. and Canada sales manager Martina Kellerova said the company is looking into opening a store here.

Color also seeped its way into the hotel rooms at Designers at the Essex House, which took place during the same days as the Waldorf show. Melon and pink were front and center at Mark Heister, the Chicago-based suit and dress line.

Overall, Heister said buyers bought short, but that she expects trunk-show business and special orders to round out the season.

Color at Kevan Hall was muted, though it was still apparent through the chiffon gowns and evening separates in aqua, mauve and ivory. Black evening separates and gowns designed with the red carpet in mind, Hall said, were highlights of the line.

Hall said business is up 10 to 15 percent, and cited a demand from customers that are looking for high-quality eveningwear as the main reason behind the anticipated growth in business. Wholesale prices for Kevan Hall run between $500 and $2,000.

Hall also said he plans to launch a small bridal collection in February for fall 2003.

Montreal-based Zenobia made its debut at market — it was formerly known as Marisa Minicucci. As reported, Minicucci left the company last summer. Brian Winston, executive vice president, said clients are responding well to the name change and business is up 12 to 16 percent over last year.

On certain pieces in the extensive collection, the price is slightly higher than in the past. But it’s the daytime dresses Winston said are best sellers.

“We’re up 35 to 40 percent,” Winston said. “We’ve added about six styles, but each comes in a few different options, so it’s quite a new deal for us.”

Zenobia’s black microfiber strapless cocktail dress is the line’s best-selling item. At $305 wholesale, Winston said it’s been on every order to date. As far as buying tendencies, Winston said stores are more careful.

“People are assessing where they want to do their buys,” Winston said. “But one does not sell from an empty store, right?”

Marsha Posner, president of New York buying office JP Associates, said Zenobia has kept its design sensibility, but that Susan Lazar, who came out of retirement to design the line, added a new edge. Overall, Posner said there was youth in the air at the rtw shows.

“It had to come,” Posner said. “Dresses are less structured and chiffon is starting to look new again. My stores still have a need for evening suits and mother-of-the-bride. That’s a category that we need that is difficult to do.”

Since it was the first time in a quite a few seasons that New York Fashion Week and about nine trade shows covering different markets all fell during the same few days, vendors said they were pleased with buyer turnout. In the past, vendors at less-high-profile trade shows said they were at a disadvantage, especially if it meant buyers had to plan separate trips to New York.

Vendors at Atelier and Pacific Designer Collections, which took place at the Rihga Royal Hotel concurrent with the Essex and Waldorf events, said business was consistent. Like most hotel shows this season, color was at the top of the list for spring and summer.

Sedona, Ariz.-based outerwear designer Candiss Cole, who has exhibited at Atelier for 16 sessions, said she brought a preview of fall 2003, so buyers can form an idea of where she’s going with the collection. Cole said she plans to reach sales of $500,000 in 2003.

At Nouveau Collective, which took place Sept. 22 to 25 at the Park Central Hotel, extended hours until 9 p.m. on opening night to help vendors meet clients who were busy at other trade shows.

“We were supposed to stay open until nine, but I didn’t stopped at 10 o’clock on the first night,” said Jim Patton, who represents dress line Sue Wong Collection. “Then I stayed open until 8:30 the second night, when I was supposed to close at six.”

Business for Sue Wong, which wholesales day and evening dresses between $69 and $300, is up about 50 percent from the last Nouveau Collective show, Patton said.

New York-based KAS-Kasada finished its second show with Nouveau Collective. Designer Karen Sadaka said bookings were strong and it helped that stores could come in on Sunday and Monday before Coterie.