The highly-anticipated fourth season of cult-political drama “House of Cards” drops on Netflix on Friday, which may bring even more entertainment than the daily sound bites provided by Donald Trump. Those who plan to hunker down this weekend and binge-watch the entire season are sure to see plenty of sleek fashions from first lady-cum-diabolical-schemer Claire Underwood, courtesy of costume designer Kemal Harris.

“There was a lot of drama at the end of season three, because Claire essentially walks out on Frank [Underwood],” Harris recapped from her Lower East Side studio. “Everybody is sort of wondering for season four, ‘what’s going to happen, is she still the first lady? Is she still in the White House? What’s going on?'” she continued. “Claire is really front-and-center in season four.”

“Season three was so much about Claire being in the White House and making an impact with her style as first lady. In season four she runs away from all of that a little bit,” explains Harris. “All the frills are gone. All that first lady arm candy, she’s kind of over it,” she continued. “I thought about Claire defining her boundaries and literally drawing a line in the sand. To me, that brought in a lot of linear details.”

To reflect the detour in Underwood’s character arc for the new season, Harris utilized contrast trim on jackets, pintucked seaming on dresses, and plenty of sharp lines. Working in tandem with the show’s (signature David Fincher) morose coloration, she kept her color palette limited to neutrals — taupes, creams and blacks, with only a splash of teals thrown in. Harris created original designs for roughly one-third of the outfits, and sourced the rest from design houses and retail stores. “We alter every single piece so it’s not exactly like off the rack,” she explained. “I’ll change a waistline, a sleeve, we’ll alter it to be more Claire-like as much as possible.”

Harris, who works primarily as a red-carpet stylist, was brought on to the show by Robin Wright before season three. Harris works exclusively with Wright’s character on the show.

“[Wright] collaborates really closely with me. She has such a great understanding of the character, obviously, and she directs two episodes every season. She fully understands when I’m obsessing over certain details. She gets it,” Harris said of their working relationship. “I’m worrying about the zipper, is it the right kind of fabric, is the pleat going to fall the right way? I’m literally obsessing over every tiny stitch in every piece of fabric. I think about it and really marinate on it so much more than the average person would even realize.” 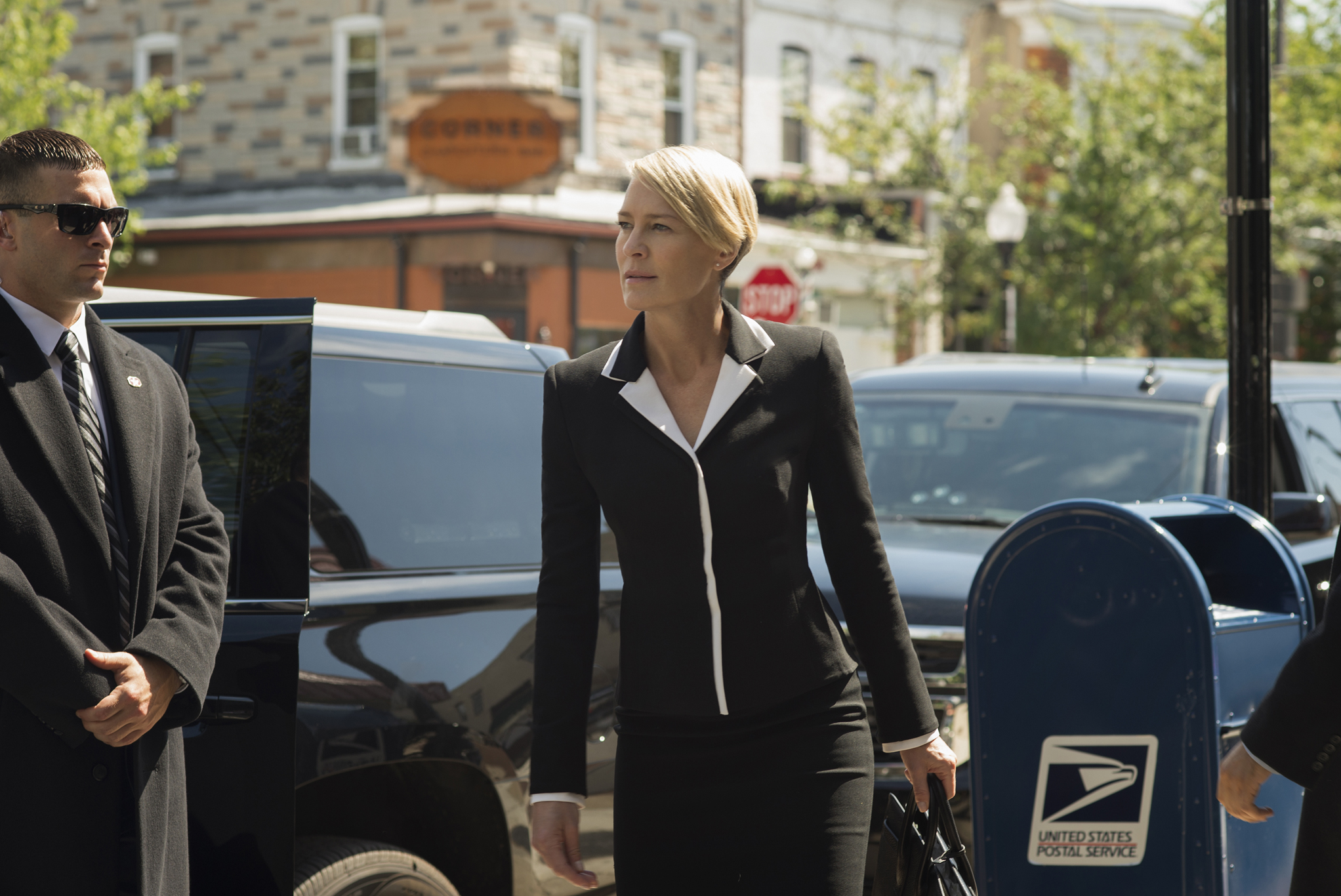 A still from “House of Cards.”